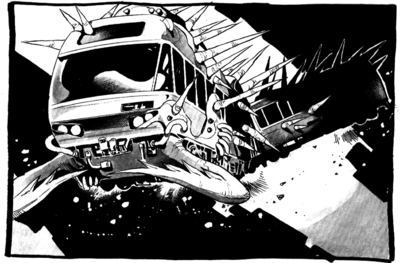 Satanic Coupler (サタニック・カプラー（凶悪連結器）, Satanikku Kapurā) is the Stand of Absalom, featured in the "One-Way Trip from the Desert to Hell City" chapter from the novel The Genesis of Universe, based on Stardust Crusaders.

The Stand solidifies and displaces matter, allowing it to create a powerful locomotive.[1]

Satanic Coupler takes the form of a diesel locomotive. It is implied that the Stand can take any form as long as Absalom can gain knowledge of it, but he keeps it in the form of a train as to not raise suspicion that it is a Stand. Satanic Coupler consists of two cars, a locomotive car with an engine and a passenger car. These two cars take two main forms throughout the story.

Initially, Joseph Joestar mentions that the front car resembles a DP35 model from EMD. The locomotive is orange, with the initials "SK" written on the side. The passenger car of the train possesses numerous characteristics of different trains from across different time periods. It has an LED board on the side which can display messages (dated to be from the 1980s), an old fashioned loudspeaker which Absalom uses to talk to the Joestar Group from within the front cabin (dated to be from the 1930s), and various other decors from the same time period as the loudspeaker.

After collecting information from the minds of the Joestar Group, Satanic Coupler transforms into a more advanced locomotive. While still retaining its two-car structure, it gains the appearance of a TGV-A, a high-velocity train by SNCF. The locomotive gains more modern characteristics, such as hydraulic breaks, air valves, and halogen headlights.

By acquiring the memories of Iggy, the Stand also gains more monstrous characteristics due to how the dog perceives trains. These include a pair of serrated horns and many sharp quills.

Satanic Coupler acts not only as a form of transportation for the user but also as a powerful offensive tool, especially if the user is able to gain more knowledge on how to improve his Stand.

Satanic Coupler's primary use is to create a train. This train has high power, being able to crash through buildings and the walls of a subway tunnel. It also displays high endurance, with the outer wall hard enough to only receive scratches after attacks from Silver Chariot and Star Platinum. The inner wall is capable of warping to dodge attacks, or parry and absorb any impact. However, the bottom of the train is vulnerable and can be damaged easily. The structure itself can also be damaged, even if not destroyed (e.g. by removing the tow hook, the wagons detach from the locomotive). The train is extremely fast and agile, with it traveling at around 200 km/h in its pre-upgrade form, and up to 515.3 km/h in its post-upgrade form.

In addition, the Stand can self-destruct. This is usually done by Absalom as a last resort, as he shrinks his Stand down to enter a human body to kill its enemies from inside their bodies.

Satanic Coupler can produce multiple tentacles within its inner hull, which can restrain people inside. These tentacles also release a viscous liquid which can paralyze those it comes in contact with. However, the primary use of these tentacles is to gain access to a person's memories. By sucking the blood out from someone, Satanic Coupler can gain their memories, specifically about trains. Absalom uses this knowledge to upgrade Satanic Coupler with newer parts. He can also use someone's imagination to form new parts, as it uses Iggy's idea of a train being a monster to make Satanic Coupler more monstrous.