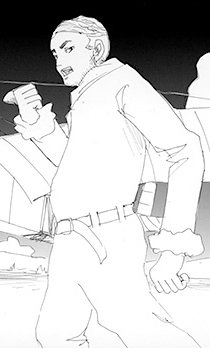 Organs pulled out by Antonio Torres

Jim Graham (ジム・グラハム, Jimu Gurahamu) is a tertiary ally featured in the light novel, JORGE JOESTAR. He is a member of the Royal Air Force and a friend of George Joestar.

Jim is a young man with an average build and short, neat hair. His hair is shorter on the sides and back compared to the top. He wears a pilot jacket.

Unlike George, Jim is a conformist who believes they should follow the orders and rules they are given. He believes there is no glory in death when being reckless. Jim wouldn't speak about such matters lightly and would only be comfortable if he was talking to someone he trusts, such as George.[1]

Jim is a member of the Royal Aero Club along with George Joestar. His plane named Simone (シモーヌ, Shimōnu) is a Blériot XI monoplane with two wheels under the main wing and one under the tail. One day when flying, Jim sees a 50 cm tall gremlin clinging to the underside of his plane. The gremlin grins at Jim and messes with Simone's engine. Before Jim crashes, he manages to land back at the base safely, assuming the gremlin had dropped off somewhere. Jim starts carrying a pistol with him whenever he would go flying, but never sees the gremlin again.

Shortly after that, Jim and George join the Royal Naval Air Service. They become the only seaplane pilots who could take off and land on an aircraft carrier sailing across the ocean, so they get moved from the English Channel to the wide open North Sea. George starts tossing bombs onto battleships but Jim disagrees with him, arguing that they should just do what they're ordered to, otherwise they'd be more likely to be shot down. The two end up having a big fight.

During a flight in 1915, Jim's Simone is broken in half by several machine gun bullets from an enemy German Albatros fighter plane. Jim falls toward the ocean but George manages to catch him in his plane. Unfortunately, Jim's navigator, Peter Fraser, falls to his death. Jim throws a bomb toward the Albatros from the back seat of George's plane, and then George shoots the bomb with his pistol, causing a massive explosion. Two more Albatros planes come after them, and Jim throws another bomb preparing to shoot it with his own pistol. However, the two Albatros planes shoot straight into the bomb and blow themselves up instead. Jim and George laugh at how lucky they were.

Their fuel suddenly runs out and they are forced to make an emergency landing. Just then, Jim starts convulsing and groaning. Antonio Torres had dived into Jim's mouth, causing Jim to shove his hands deep into his mouth. He pulls out his tongue, along with flesh, parts of his ribs, and his internal organs. Jim slowly asks George to help him and then dies.

Antonio remains in Jim's body and impersonates him when he is found floating in the wreckage of George's plane by the Royal Flying Corps. Imitating Jim, Antonio lies to the new commander William Cardinal that George abandoned him while he was injured, immediately surrendered to the German fighters, ran away, and is now spying for the enemies. Antonio then speaks to George on the phone while pretending to be Jim, stating he'll happily testify to George being a spy and that he'll kill him the next time he sees him.[1]

Jim later returns as a zombie piloting a Sopwith Camel plane. George notes that he had become a much better pilot after transforming into a zombie. Jim hurtles toward George in his plane and then George decapitates him with the wingtip of the Fokker plane he is riding.[2]