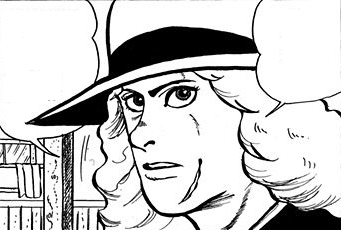 Killed by a cocktail molotov

Mike Harper (マイク・ハーパー, Maiku Hāpā) is one of the main characters of Poker Under Arms. He is a skilled gunman and a card sharp player whom Don Peckinpah challenges in a game of poker.

Mike Harper is a lean mean with a long face and smooth features, save for a scar on the left sift of his mouth. Harper has long, curly, light hair.

Harper wears a light shirt, a dark tie, a spotted vest and a dark jacket. He also wears a typical cowboy's hat.

Contrasting Don Peckinpah, Harper has a senere yet prideful personality.

Harper is a man of few words, who is nonetheless cordial and more sophisticated than Peckinpah in his mannerisms. Harper still has a prideful personality. When Peckinpah shows off, Harpers feels obligated to also demonstrate his skills at cardistry to match with his foe,[1] and he shows some satisfaction when he wins against Peckinpah at poker.

It is implied that Harper is as brutal as Peckinpah, as he's amassed a bounty of $10,000 like Peckinpah.[2] When a bounty hunter shows up, Harper guns him down at the same time as Peckinpah[3] and then draws a gun on him when he learns that he's cheating at poker, showing that Harper is ready to kill his enemies.[4]

Harper is a skilled gunman, who's managed to survive despite having a $10,000 bounty on his head. When he bounty hunter appears, Harper has the instinct to see him coming and easily guns him down.[3]

Harper is also skilled at cardistry. He's able to mix a deck of card and make it so the four aces are next to each other, even when someone cuts the pile.[1] His "luck" at poker is implied to be him cheating, and he's able to switch four cards in his hand without being caught, until someone points out that he and Peckinpah have the same hand.[4]

Just after arriving in town, Harper goes to the saloon and plays poker. He easily wins and catches the attention of Don Peckinpah, another outlaw with a bounty on his head. To show off, Peckinpah takes four cards and flicks them into the deck to push out the four aces. Not to be outdone, Harper then mixes the deck so that the four aces end up at the top, scaring the other players away. The two gunmen agree to play one-on-one.

Mike Harper quickly reveals himself to be the better player and keeps winning. Frustrated by his losing streak, Peckinpah takes out his anger on a drunken old bum interrupting the game. Regaining his composure, Peckinpah devilishly suggests that they bet their guns to make the game more interesting, which would the loser defenceless against anyone wanting to claim their bounties. Unaware of the bluff, Mike Harper reluctantly agrees. Peckinpah secretly switches his cards and reveals his hand, four of a kind in queens. Unfortunately, Harper has also cheated and also has four queens. When the bum points this, out, Peckinpah and Harper throw the table and draw. At this moment, the old bum throws a molotov cocktail at the two gunmen, killing both.[5]