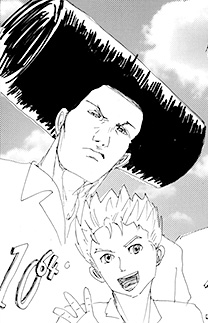 JORGE JOESTAR Chapter 4: Morioh
“
Yeah! We're doing this for Shigechi and Aya Tsuji! If we stop shootin' our mouths off and DO something, he'll have to take action! Time to shut up and put up! We gotta go if we wanna get anywhere!
”
—Fukashigi Nijimura, JORGE JOESTAR Chapter 6: Island

Fukashigi is a tall teenager with a muscular build. His most prominent feature is his oddly shaped wide cylindrical pompadour. Unlike his brother's hairstyle and regular pompadours, Fukashigi's hair is shaped horizontally, stretching past his ears on both sides of his head. Fukashigi typically wears a Japanese school uniform. Both his regular and summer uniforms are modified to have 1064 written in large text below his collar.

Fukashigi acts impulsively, attacking Jorge before confirming whether he's actually an enemy.[1] He is loud-mouthed and aggressive but cares a lot for his family and friends. He motivates himself to act by believing that it's for a good cause, as defeating Kira would avenge his friends who were murdered by Kira. Although his own Stand frequently insults him, Fukashigi is used to it and laughs it off, insulting NYPD Blue back sometimes as well. He tends to be optimistic or naive, as he thinks the roads were all deserted because everyone was organized, when in actuality, they were involved in a Mass Hysteria incident.[3]

He is afraid of insects. Fukashigi is insecure about his usefulness and his inability to help the citizens of Morioh but listens to advice from his Stand, who tells him to sit and wait rather than fighting impulsively.[4]

Fukashigi relies on his brother a lot, and the thought of living away from Muryotaisu fears him, but he is excited about the opportunity to try living on his own in New York and going to college there.[5]

Fukashigi's Stand manifests as a sentient overweight police officer who thinks he's a New York police officer. He has a foul mouth but acts as a good cop, capable of gathering evidence from any police organization throughout the world and broadcasting footage to those organizations. For combat, the Stand uses a Colt Python revolver, with similar capabilities as an actual gun.

Fukashigi Nijimura is a sixteen-year-old high school student at Budogaoka Academy in Morioh, who is friends with Koji Hirose and Rohan Kishibe (Universe 37).

One day, Shigetaka Yangu's dog brings a severed hand to his owner with unique nail polish. Fukashigi and his friends are able to figure out where the nail polish was sold. They learn that it had been purchased by a man, which the store owner thought was unusual enough and remembered his name, Yoshikage Kira (Universe 37). The hand belonged to a woman that Kira killed and had been toying with.

The Nijimura brothers arrive to help Koji after he is the first to find Kira and nearly dies. However, Kira manages to escape and forces Aya Tsuji (Universe 37) to use her Stand Face/Off to switch his appearance with a random passerby. Kira then kills Aya as well as Shigetaka as a warning not to interfere with him.[3] 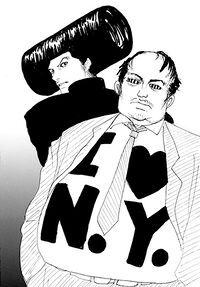 Along with Muryotaisu and Koji, Fukashigi rings the doorbell of Rohan's house to try finding him. They confront Jorge Joestar who is inside the house assuming he did something to Rohan, mentioning that nobody had seen Rohan for two weeks. Fukashigi grabs Jorge with his Stand, mentioning that it's possible that Jorge could actually be Yoshikage Kira pretending to be a detective. As soon as Fukashigi says Kira's name, he disappears.

Jorge deduces that Reimi is actually a humanoid Stand who could control the Arrow Cross House, and used her ability to hide Fukashigi. Reimi's ability allowed her to keep Rohan and Fukashigi in a suspended state between life and death beneath the Arrow Cross House. As there is no oxygen in that area, they would not explode from Kira's Bites the Dust. After Muryotaisu and Koji trust Jorge, he asks Rohan to use Heaven's Door on them, allowing them to see Reimi's "astral projections" of Fukashigi and Rohan.[1]

Morioh suddenly detaches itself and becomes an island. Soon, Morioh changes direction causing Arrow Cross House to spin to the left. Fukashigi goes flying from the force and lands on top of his Stand NYPD Blue, which appears as a chubby bald middle-aged man in a suit. NYPD Blue is sentient, believing that he's a cop from New York. A loudspeaker in the distance declares that Morioh will have an emergency meeting at the Budogaoka gymnasium and all citizens must attend. Rohan says his temporary goodbyes to Reimi as she could not come with them and the Nijimuras and Koji tease him for flirting with her. At this point, Kira cancels his Bites the Dust effect and Fukashigi is back to normal.

The group gets onto a dolphin from Muryotaisu's Grand Blue and fly away toward the school like rockets. By the time they reach Jozenji, they find the temple had burned to the ground. The remains of the walls and floor were covered in drawings of moths and the citizens there had set themselves on fire. Jorge and Rohan realize that since this place had some sort of mass hysteria, it might also happen at Budogaoka gymnasium where all of Morioh's anxious citizens were gathered. They quickly head to the gym on Grand Blue, finding thousands of people pouring gasoline on each other when they arrive. Fukashigi starts breaking windows with Muryotaisu, but since it would take too much time, Koji creates a giant propeller with his Blue Thunder to break the walls of the gym.

They notice Arrow Cross House shaking from side to side, which was the SOS signal that they decided on. Using Grand Blue, Muryotaisu, Fukashigi, and Jorge quickly fly back to Arrow Cross House to check on Reimi. Muryotaisu finds Reimi collapsed inside and carries her to Jorge and Fukashigi. Reimi states that people from the harbor suddenly tried burning the house down but she stuck them all under the house with her ability, and the house shaking was just a result of the battle. After Jorge investigates Cube House, Fukashigi calls for him to come out and look at what is happening outside. In the distance, Jorge sees Nero Nero Island, the headquarters of a mafia group called the Passione Family, had suddenly started traveling very quickly across the ocean towards Morioh.[3]

Meanwhile, Muryotaisu takes out a telescope and a pair of binoculars from Arrow Cross House for recon purposes. With the pair of binoculars, Fukashigi watches Nero Nero Island sailing toward them. Muryotaisu spots a truck on that island racing down the road to the harbor and says that people in the back of the truck are waving at them for help. As Jorge attempts to see for himself, the truck suddenly bursts into flames. The citizens on the truck are then murdered by suspicious figures with Stands. Desperate to go help them, Fukashigi yells at his Stand NYPD Blue for being unable to do anything, but NYPD Blue retorts that he's gathering evidence to arrest all of those criminals. From his stomach, he prints out copies of Dolcio Cioccolata's criminal records from Interpol, the Italian police, the CIA, and the FBI. Muryotaisu desperately tries breaking through the barrier to no avail, as Fukashigi and Jorge watch helplessly. 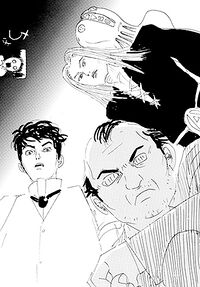 Fukashigi creeped out from the autopsies

Nero Nero Island collides with Morioh, but the collision of the two barriers propels Nero Nero Island upwards. Insect-like legs suddenly emerge from under Nero Nero Island as it crashes through Morioh's barrier and lands in the harbor. Jorge, Muryotaisu, and Fukashigi freeze in shock. Grand Blue starts shoving Muryotaisu and chirping at him to wake him up, while NYPD Blue then fires a shot in the air to wake everyone up. Muryotaisu and Fukashigi flee while Jorge heads back to Arrow Cross House with Rohan. Jorge and Koji eventually reunite with the Nijimura brothers in a factory.[4]

Later, Fukashigi watches the investigation of the George Joestar from the original universe, after he ends up in the 37th universe. NYPD Blue assists George with the autopsies of Diavolo (Universe ?) and Kosaku Kawajiri (Universe 37), who they assumed was Kira at the time. Following George's request, all of the clocks in the house are brought to the study by Fukashigi, Rohan, Koji, and Muryotaisu. The Nijimura twins are creeped out at how all of Rohan's clocks are exactly in sync with even the second hands matching, but Rohan argues that he isn't as sloppy as them.

After hearing Jorge's plan on the pebble phone, NYPD Blue insists Manhattan is his territory and decides to come with them, dragging Fukashigi into Cube House's hole. When the battle against Dio Brando is over, NYPD Blue convinces Fukashigi to live in New York. At first he is worried to live apart from his brother, but he decides he should apply for a college there.[5]