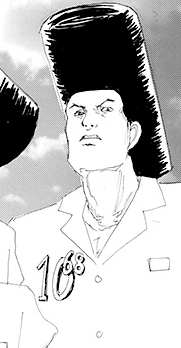 JORGE JOESTAR Chapter 4: Morioh
“
You're a man, ain't ya? I don't care if you're English or Japanese, you need to grow some balls! Yoshikage Kira's a scumbag who goes around murdering women! We can't let him live another second! Stop mewling and let's get!
”
—Muryotaisu Nijimura, JORGE JOESTAR Chapter 6: Island

Muryotaisu is a tall teenager with a muscular build. His most prominent feature is his wide cylindrical pompadour. Muryotaisu typically wears a Japanese school uniform. Both his regular and summer uniforms are modified to have 1068 written in large text below his collar.

Muryotaisu is caring for his friends and his brother. If his brother is harmed, he gets extremely violent, claiming that beating up people is what he's best at.[1] He is also empathetic for strangers and tries his best to try saving the numerous civilians trapped in his school's gym,[3] as well as the citizens from Nero Nero Island who wave for help.[4]

He seems to be good at motivating others, as he convinces Jorge to be a man and help them catch Kira.[3]

Muryotaisu Nijimura is a sixteen-year-old high school student at Budogaoka Academy in Morioh, who is friends with Koji Hirose and Rohan Kishibe (Universe 37). At some point, his Stand Grand Blue evolves to be three dolphins instead of just one.[5]

One day, Shigetaka Yangu's dog brings a severed hand to his owner with unique nail polish. Muryotaisu and his friends are able to figure out where the nail polish was sold. They learn that it had been purchased by a man, which the store owner thought was unusual enough and remembered his name, Yoshikage Kira (Universe 37). The hand belonged to a woman that Kira killed and had been toying with.

The Nijimura brothers arrive to help Koji after he is the first to find Kira and nearly dies. However, Kira manages to escape and forces Aya Tsuji (Universe 37) to use her Stand Face/Off to switch his appearance with a random passerby. Kira then kills Aya as well as Shigetaka as a warning not to interfere with him.[3] 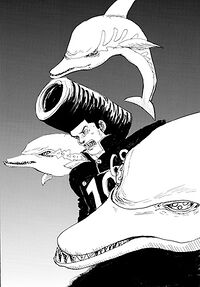 Along with Fukashigi and Koji, Muryotaisu rings the doorbell of Rohan's house to try finding him. They confront Jorge Joestar who is inside the house assuming he did something to Rohan, mentioning that nobody had seen Rohan for two weeks. While Fukashigi grabs Jorge, Muryotaisu looks toward the house and starts yelling for Rohan. As soon as Fukashigi says Kira's name, he disappears, and his brother Muryotaisu runs around looking for him. Muryotaisu is about to attack Jorge assuming he did something, but Jorge exclaims that he'll find Fukashigi.

After they trust Jorge, he asks Rohan to use Heaven's Door on Muryotaisu and Koji, allowing them to see "astral projections" created by Arrow Cross House.[1]

Morioh suddenly detaches itself and becomes an island. The State Defense Force sent out six planes headed to Morioh but the lead F-22 plane suddenly explodes, revealing that Morioh has an invisible dome barrier surrounding it. Muryotaisu starts shouting when he notices that one of the fighter planes fired a missile. However, the missile explodes in mid-air as it hits the side of Morioh's barrier. A loudspeaker in the distance declares that Morioh will have an emergency meeting at the Budogaoka gymnasium and all citizens must attend. Rohan says his temporary goodbyes to Reimi as she could not come with them and the Nijimuras and Koji tease him for flirting with her.

Muryotaisu summons his Stand Grand Blue, manifesting as three dolphins named Jacques, Enzo, and Johana. The group gets onto a dolphin and fly away toward the school like rockets. The flight was much gentler than physics would ordinarily allow because of Muryotaisu's ability. By the time they reached Jozenji, they found the temple had burned to the ground. The remains of the walls and floor were covered in drawings of moths and the citizens there had set themselves on fire. Seeing the charred corpses, Muryotaisu feels sick to his stomach. Jorge and Rohan realize that since this place had some sort of mass hysteria, it might also happen at Budogaoka gymnasium where all of Morioh's anxious citizens were gathered. They quickly head to the gym on Grand Blue, finding thousands of people pouring gasoline on each other when they arrive. Muryotaisu starts breaking windows of the gym with his dolphins and Fukashigi, but since it would take too much time, Koji creates a giant propeller with his Blue Thunder to break the walls of the gym.

They notice Arrow Cross House shaking from side to side, which was the SOS signal that they decided on. Using Grand Blue, Muryotaisu, Fukashigi, and Jorge quickly fly back to Arrow Cross House to check on Reimi. Muryotaisu finds Reimi collapsed inside and carries her to Jorge and Fukashigi. Reimi states that people from the harbor suddenly tried burning the house down but she stuck them all under the house with her ability, and the house shaking was just a result of the battle. Jorge later uses one of Muryotaisu's dolphins, Johana, to investigate Cube House.[3]

Meanwhile, Muryotaisu takes out a telescope and a pair of binoculars from Arrow Cross House for recon purposes. Jorge warns Muryotaisu not to go back into Arrow Cross House for a while because he thought he saw someone suspicious hiding inside Cube House. However, Muryotaisu then goes back in to set up a hidden video camera. With the pair of binoculars, Fukashigi sees Nero Nero Island sailing toward them. Muryotaisu spots a truck on that island racing down the road to the harbor and says that people in the back of the truck are waving at them for help. As Jorge attempts to see for himself, the truck suddenly bursts into flames. The citizens on the truck are then murdered by suspicious figures with Stands. Desperate to go help them, Muryotaisu summons Grand Blue and flies off into the sky, despite being unable to leave because of the barrier around Morioh. He desperately tries breaking through the barrier to no avail, as Fukashigi and Jorge watch helplessly.

Nero Nero Island collides with Morioh, but the collision of the two barriers propels Nero Nero Island upwards. Insect-like legs suddenly emerge from under Nero Nero Island as it crashes through Morioh's barrier and lands in the harbor. Jorge, Muryotaisu, and Fukashigi freeze in shock. Grand Blue starts shoving Muryotaisu and chirping at him to wake him up, while NYPD Blue then fires a shot in the air to wake everyone up. Muryotaisu and Fukashigi flee while Jorge heads back to Arrow Cross House with Rohan. Jorge and Koji eventually reunite with the Nijimura brothers in a factory.[4]

Later, Muryotaisu watches the investigation of the George Joestar from the original universe, after he ends up in the 37th universe. Following George's request, all of the clocks in the house are brought to the study by Muryotaisu, Rohan, Koji, and Fukashigi. The Nijimura twins are creeped out at how all of Rohan's clocks are exactly in sync with even the second hands matching, but Rohan argues that he isn't as sloppy as them. After Rohan says something that depresses Reimi, the Nijimura twins and Koji scold Rohan for his rudeness, leading Rohan to finally realize his thoughtlessness. Rohan apologizes and says that he's not trying to be conceited but he just expects too much from people. The Nijimura twins and Koji laugh about his arrogance. During the investigation, they notice that Vinegar Doppio is no longer with them so Muryotaisu summons Grand Blue to go find him. The dolphins quickly retrieve him from Cube House below the study, where he angrily points out that he was on the phone. [5]