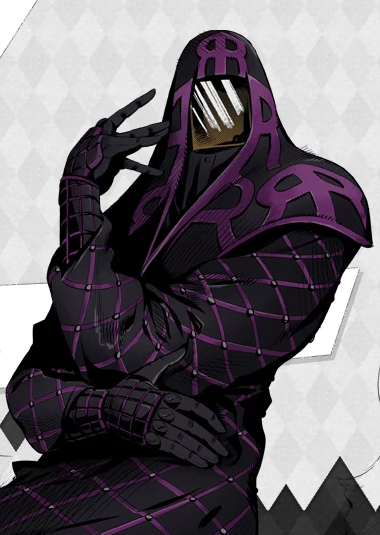 Destructive Power
E
Speed
D
Range
∞
Stamina
B
Precision
C
Developmental Potential
E
A
B
C
D
E
A: Very Good
B: Good
C: Average
D: Poor
E: Very Poor
“
"What? Sold out already?" "No tickets at the door?" "I forgot!" ―If you're careless like that, please use the "Remote Romance" Stand to celebrate the 25th anniversary of the series.
”
—NLab Article

Remote Romance (リモートロマンス, Rimōto Romansu) is the former Stand of Dixie Flatline, featured in the Hirohiko Araki JoJo Exhibition 2012. It was created with the supervision of Hirohiko Araki to commemorate the 25th anniversary of the JoJo's Bizarre Adventure series, allowing any fan in the world to remotely view the art exhibition through internet live-streaming.

After its user's death, the Stand remains alive and wanders in the network. Possessing anyone with access to a particular site, it grants them the ability to project a virtual version of themselves into a remote location.

Remote Romance is a humanoid Stand dressed in a hooded robe covering its entire body, with black and purple tones. Its robe is covered in a shiny net pattern of rhombuses, contrasting the dark clothes. Its hood is decorated with a motif of the letter "R" all around it, with a large "ЯR" symbol in the center of its forehead. The hood can also emit a low light from under it, lighting its chest in case the environment is dark.

Rather than having a face, it has a screen in the center of its head which displays the face of a user that it possesses, who is watching the exhibition live stream. It wears gauntlets and forearm guards covered in a pattern of squares.

When it is summoned, the bottom half of its body is invisible and fades into a black mist, making it appear like a phantom.

The series is known for alternating colors between media, the information presented below may or may not be canon.
Appearance
(Black and purple cloak, dull yellow tinted screen.)

Remote Romance was created in response to the popularity of the art exhibition and advance tickets for it selling out early, as there were no plans to sell tickets on the same days as the exhibition. In cooperation with Google, the Stand allows any fan to "visit" the venue from any location, as well as be able to see the exhibition more than once without going in person.

Remote Romance was scheduled to appear on Tuesdays and Wednesdays during the exhibition sessions, although it also appeared on November 3 and 4 for the last two days of the exhibition.[1]

There was originally a visitor-only area that could not be seen using the Stand. However, on November 3 and 4, even Remote Romance allowed access to that area.

The original user of Remote Romance was a legendary hacker named Dixie Flatline, who was sentenced to death in 2006. After his death, only his Stand remained on the network for anyone with access to a particular site to use it. Remote Romance's fate is based on the fate of the character its original user was named after. In the story of Neuromancer, after the character Dixie Flatline died, a saved copy of his mind existed in cyberspace during the story.

On select nights during the exhibition's scheduled sessions, Remote Romance would emerge and wander in the gallery, looking at pieces of artwork while under the "control" of users who accessed the gallery's live stream on the Hangouts video chat feature of Google+.

Users would be able to see the exhibition through the Stand's point of view. Simultaneous feeds of the Stand being followed around the gallery and of people who logged in to "control" the Stand could also be seen.

The Stand possesses humans who have access to a particular server and gives them the ability to project an alter ego to a remote location. These users could then control the Stand to wander around the exhibition venue and see it in real time as if they were there themselves, despite being far away.

To control the Stand, a user would need to add Remote Romance's Google+ account to their circles. The number of people who can operate Remote Romance is limited, but the video projected by the Stand is broadcasted live on the exhibition's special website, so anyone can watch.[2][3]