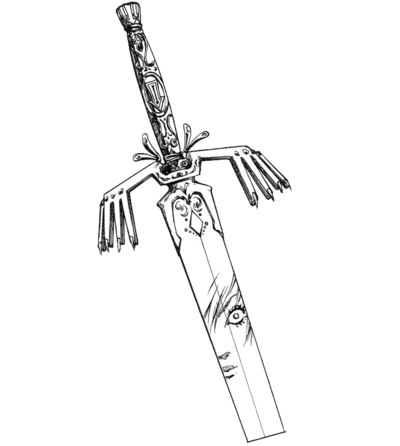 Destructive Power
A
Speed
A
Range
C
Stamina
A
Precision
B
Developmental Potential
C
A
B
C
D
E
A: Very Good
B: Good
C: Average
D: Poor
E: Very Poor
“
I keep warning you, Vittorio, your Dolly Dagger can only reflect seventy percent of damage. You can't let just anybody hit you and expect to get away with it.
”
—Massimo Volpe, Purple Haze Feedback Chapter 1: vitti 'na crozza

It is a dagger that allows Vittorio to partially reflect damage received toward someone else. The Stand was born from Vittorio's strong desire to prove personal innocence and transfer blame and responsibility to others.[1]

The Stand is bound to an ancient straight double-edged dagger from the Napoleonic era. The dagger itself features a decorative hilt and a rusted blade,[2] but shines like a mirror when the Stand is active.

Dolly Dagger's pommel has three upward arrows with the one in the middle being larger. Extending from the pommel is two curved symbols on the sword's grip, with a small jewel in between the curves. It also has a large arrow in the center, surrounded by a circle. Above that, it has two more curved symbols except they are flipped versions of the previous curves. The top of the guard has two thin tube-like protrusions on each side, while the guard itself extends outward in the form of four fingers with sharp nails. The bottom of the blade has a pattern of two crescents on each side. There is a large diamond above it, which is surrounded by several small circles.

Despite being bound to a dagger, Dolly Dagger acts more like a passive ability.

Its damage reflection is a redoubtable power as it will automatically damage the attacker and makes Vittorio naturally more resilient in combat. However, it backfires against Stands with multiple bodies, as they can withstand the damage better than Vittorio himself.

Whenever the user takes damage, 70% of that damage is transferred to whatever is reflected on the blade of the dagger, while the user still receives the remaining 30%.[3] Gunshot wounds and even viral infections can be transferred.

The Stand can not only reflect attacks from others but damaging one's self can also direct the damage to whoever is reflected in the blade. The damage that is received is in the same location of where the damage was dealt. The damage that is reflected is not what was dealt physically, but rather "the level of damage" that was received, i.e if a man in a suit of armor attacked, and his attack was reflected, the amount of reflected damage he would receive would be irrelevant to how well his armor can defend against physical attacks.