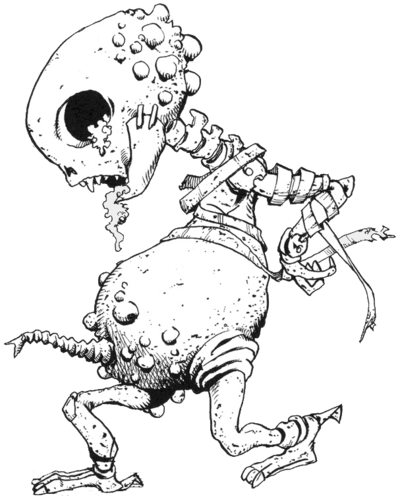 Manic Depression (マニック・デプレッション, Manikku Depuresshon) is the Stand of Massimo Volpe, featured in the light novel Purple Haze Feedback. It is a small humanoid Stand with a cadaveric look that can synthetize a powerful opiate and manipulate the body's chemical balance.

Manic Depression is a cadaveric looking humanoid creature less than 1 meter tall. Its appearance is akin to a mummified malnourished infant.[1] Its arms and chest are partially wrapped in bandages. With the exception of its swollen stomach and large skull-like head, the rest of its body is fairly lanky and skeletal.

It can produce thorn-like hypodermic needles from its body and has an umbilical cord-like protrusion coming from its stomach.

Manic Depression is able to increase the biological functions of organisms by piercing them with its thorns. This technique can be used to increase the heart rate (causing it to explode), force irregular stomach digestion, or increase one's physical attributes for a couple of minutes, after which the body breaks down. This ability can also slow the progression of incurable diseases.[2]

It also has the power to convert salt into a powerful opiate, allowing it to be injected for a drug-like effect. The drawback is that the drug formed from the salt only exists for a total of two weeks before reverting back into salt.[2]