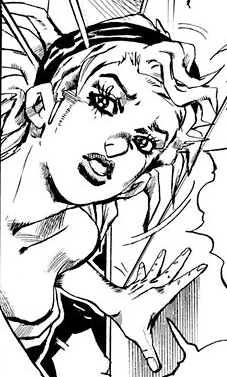 Yamaoka (山岡, Yamaoka) is a character featured in the one-shot Deadman's Questions.

She lives together in an apartment with her dog Rocky and a wanted criminal.

Yamaoka is a young woman of seemingly average height and a slim build. She has short hair up to her neck and wears a hairband. She is first seen just wearing a towel and later wears a dress.

Yamaoka seems to be very wary of danger, as she refuses to let Yoshikage Kira (disguised as a delivery man) into her house, and becomes suspicious when her dog, Rocky starts barking, and she finds a knife on the floor. This wariness ironically fails her however, as she is deceived by a wanted criminal into letting him live with her.

Yamaoka lives together with a wanted man responsible for a child murder case fifteen years ago. Probably in an attempt to hide him, she is careful about who enters her apartment. Yoshikage Kira is assigned to kill the man but needed permission to enter her apartment. He tries to trick her into believing he is a man delivering a plastic model so that she would open the door. She doesn't believe him and asks constant questions about his delivery. He finally convinces her to open the mail slot on her door for him to give her a receipt for her to sign confirming that she rejects the delivery. As she opens the mail slot, Kira enters her home. She thinks about how creepy the encounter was and takes a shower after accidentally stepping on her boots and getting the grease on her foot.

Meanwhile, Kira is confronted by her dog Rocky soon after. She sees the knife Kira dropped and becomes worried that someone else might have been inside the house, as Rocky was constantly barking.

After Kira stabs the wanted man he calls Yamoka with a phone, telling her to call the police. She asks if the man is calling her inside of his own room, while Kira wonders if she was deceived by the wanted man or knew about his past all along and was simply hiding him.[1]