This is a list of minor characters featured in the second part of JoJo's Bizarre Adventure, Battle Tendency. 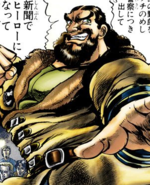 Bruto (ブルート, Burūto) was one of the many people who were outside the cafe during Joseph Joestar and Straizo's battle. In an attempt to impress a girl, he temporarily detains Joseph after the latter had blown up Straizo, along with the cafe. Joseph quickly kicks him in the nose and runs off, leaving Bruto on the ground holding his face while the girl says that Joseph is way cooler than him. He is omitted from the anime.

Manga Debut: Chapter 52: Straizo vs. Joseph, Part 5
Adolf Hitler (アドルフ・ヒトラー, Adorufu Hitorā) and his Nazi army had conquered Czechoslovakia during the escalating second world war at some point after Joseph and Straizo's battle. Hitler believed the Germans were the most evolved people and wanted to control the spiritual and scientific world by trying to use astrology, magic, alchemy, ESP and occult as weapons of war. He also altered the swastika design, as it was originally a magical symbol representing destiny and life found in ruins throughout the world.

He had an information base set up in Mexico where Rudol von Stroheim had already learned about Straizo's actions and was investigating Santana. When describing the fleshbud DIO implanted in Kakyoin, Joseph compares its sheer emotive power to that which drives a man to follow Hitler.[1] He is omitted from the anime.