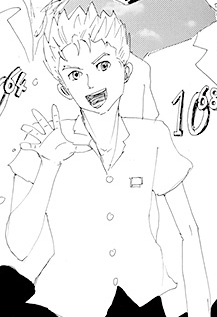 Koji Hirose (広瀬 康司, Hirose Kōji) is a secondary ally from Morioh in the 37th universe, featured in the light novel JORGE JOESTAR.

Koji is a short, skinny teenage boy with spiky hair. He has a few thin bangs on his forehead. Koji resembles Koichi Hirose from the first universe and also wears a Japanese school uniform. When he fought Yoshikage Kira (Universe 37) in the past, Koji's uniform was a black gakuran. During the summer when the story takes place, his uniform consists of a collared t-shirt with the top unbuttoned and pants.

Koji is an amiable teenager who can also be reliable. Unlike his friends, he is not as rowdy. Jorge says that Koji appears like a nice kid and doesn't seem like the type to be friends with the two he hangs out with. He is friendly with strangers but also perceptive, as he watches Jorge carefully when they first meet just in case Jorge is an enemy Stand user.

Koji is humble about his Stand, thinking it looks lame despite its usefulness in both transportation and combat.[1]

Koji's Stand allows him to spawn propellers on either his or anyone else's bodies. He typically places them on his head enabling him to fly, but he can also place them on his hands to generate gusts of wind. The size of the propellers can be adjusted as well. 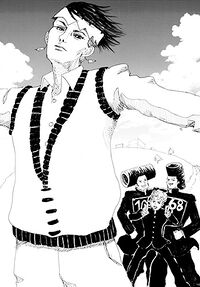 Koji and his friends

Koji Hirose is a sixteen-year-old high school student at Budogaoka Academy in Morioh, who is friends with Muryotaisu Nijimura, Fukashigi Nijimura, and Rohan Kishibe (Universe 37). He is also the boyfriend of Yamagishi.

One day, Shigetaka Yangu's dog brings a severed hand to his owner with unique nail polish. Koji and his friends are able to figure out where the nail polish was sold. They learn that it had been purchased by a man, which the store owner thought was unusual enough and remembered his name, Yoshikage Kira (Universe 37). The hand belonged to a woman that Kira killed and had been toying with.

Koji is the first to find Kira and nearly dies until the Nijimura brothers arrive to help. However, Kira manages to escape and forces Aya Tsuji (Universe 37) to use her Stand Face/Off to switch his appearance with a random passerby. Kira then kills Aya as well as Shigetaka as a warning not to interfere with him.[3]

Along with the Nijimura brothers, Koji rings the doorbell of Rohan's house to try finding him. They confront Jorge Joestar who is inside the house assuming he did something to Rohan, mentioning that nobody had seen Rohan for two weeks. Koji observes Jorge's actions while Fukashigi threatens him. 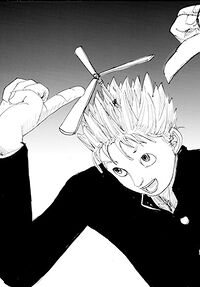 After trusting Jorge, Koji reveals his Stand Blue Thunder and what it could do, though he believes it looks quite lame. Jorge asks Rohan to use Heaven's Door on Muryotaisu and Koji, allowing them to see "astral projections" created by Arrow Cross House. Suddenly, Morioh has an earthquake and a chasm opens along its borders. Koji flies into the air with his Stand and reports that Morioh somehow detached off of Japan and became its own island, sailing on the sea.[1]

Jorge questions how Koji and the others knew Kira's name without actually catching him, leading to Koji telling the story of their friend Shigetaka. Morioh changes direction causing Arrow Cross House to spin to the left. A soldier in a SDF helicopter above the dome loses his balance and slides along the dome. Koji uses Blue Thunder to save the soldier, who gives him a top secret message for Morioh's mayor. The message stated that if nothing changes, the American army will flip the island. Koji shows them a picture he took on his cellphone, showing the former president of the United States, Funny Valentine (Universe 37), holding up a note with the message. As the helicopter flies away, a loudspeaker in the distance declares that Morioh will have an emergency meeting at the Budogaoka gymnasium and all citizens must attend. Rohan says his temporary goodbyes to Reimi as she could not come with them and the Nijimuras and Koji tease him for flirting with her. Jorge questions whether he should come with them because he isn't a Stand user, but everyone convinces him to because he's the detective and has to solve the case.

Muryotaisu summons his Stand Grand Blue and the group gets onto a dolphin, flying away toward the school like rockets. Koji feels unsettled about how empty the roads were. By the time they reached Jozenji, they found the temple had burned to the ground. The remains of the walls and floor were covered in drawings of moths and the citizens there had set themselves on fire. Jorge and Rohan realize that since this place had some sort of mass hysteria, it might also happen at Budogaoka gymnasium where all of Morioh's anxious citizens were gathered. They quickly head to the gym on Grand Blue, finding thousands of people pouring gasoline on each other when they arrive. Jorge realizes they could probably alter the conditions of the hysteria by destroying the locked room. Koji uses Blue Thunder and enlarges his propellers until they fill up the entire gym. His Stand becomes a giant shredder and tears apart the walls and ceiling of the gym.[3]

Passione gangsters from Nero Nero Island attack Morioh and Koji hides in a garage. He reunites with Jorge and uses Blue Thunder on him, allowing Jorge to fly. The two fly through the neighborhood and find the Nijimura brothers in a factory. Koji tells them that several Passione members jumped into Morioh and kidnapped all the citizens in the school gym. He also explains that Passione is using Mayor Shishimaru to relay orders and now they're dragging Stand users into the open, promising not to harm anyone if they come forward on their own accord.[4]

Later, Koji watches the investigation of the George Joestar from the original universe, after he ends up in the 37th universe. Following George's request, all of the clocks in the house are brought to the study by Koji, Rohan, Muroytaisu, and Fukashigi. After Rohan says something that depresses Reimi, Koji and the Nijimura twins scold Rohan for his rudeness, leading Rohan to finally realize his thoughtlessness. Rohan apologizes and says that he's not trying to be conceited but he just expects too much from people. The Nijimura twins and Koji laugh about his arrogance.[5]