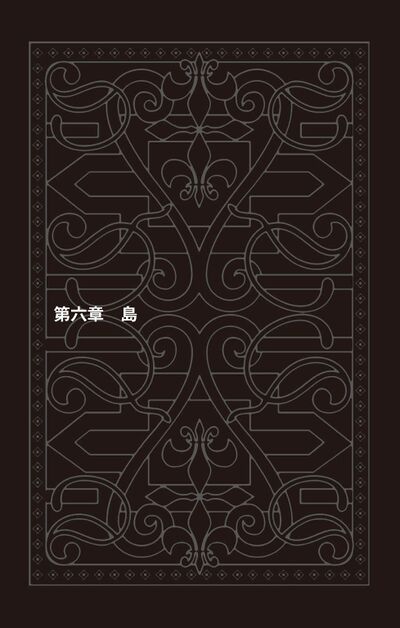 Chapter 6: Island (第六章・島, Dairokushō Shima) is the sixth chapter of JORGE JOESTAR, a light novel based on the JoJo's Bizarre Adventure series.

Separated from Japan, Morioh travels south at an insane speed of 100 knots (185 km/h). The State Defense Force sent out six planes headed to Morioh but the lead F-22 plane suddenly explodes, revealing that Morioh has an invisible dome barrier surrounding it. Muryotaisu starts shouting when he notices that one of the fighter planes fired a missile. However, the missile explodes in mid-air as it hit the side of Morioh's barrier. Rohan draws a map of Morioh for Jorge. They assume Morioh became an island from the powers of an individual and plan to head to Budogaoka Academy, because the school was located in the center of the dome. Reimi reveals that Kira had canceled the effect of Bites the Dust, so Fukashigi and Rohan were now safe and freed from Arrow Cross House's protection. Suspicious of the timing, Rohan wonders if Kira is the one who is moving Morioh. Reimi then holds out a cellphone, showing the others a live stream of an emergency press conference held by Chomaru Bariya and twelve other detectives. They discuss the murders of Sachiari Hakkyoku, Nekoneko Nyan Nyan Nyan, and Tsukumojuku Kato. They also address how Morioh has suddenly detached and propelling itself as a separate island. Finally, Chomaru relays a message to Kira, stating that their group knows that he isn't the one who killed the three detectives. They knew that the real murderer deliberately killed them as bait to frame Kira. He asks Kira to calm down and cooperate with them, promising that they won't do anything to him if he helps them.

Jorge wonders how the detectives all knew about Kira's name since they weren't involved with the fifteen locked room mysteries. He theorizes that the detectives are aware of Stands and that Chomaru assumed Kira developed the power to make Morioh travel, so calming down Kira should make the power stop. Jorge questions how Koji and the others knew Kira's name without actually catching him, leading to Koji telling the story of their friend Shigetaka Yangu. Shigechi had a Stand named Stray Dog and one day, one of his dogs came back to him carrying a severed hand in his mouth. Shigechi and his friends investigated and the nail polish on the hand was unusual enough that they were able to figure out where it was sold. It was purchased by a man which the shopkeeper thought was unusual enough and remembered the man's name. They almost caught him once but Koji was the first to reach Kira and nearly died until the Nijimuras caught up in time. Just as they almost had him, he managed to escape and forced Aya Tsuji to use her Stand Face/Off to switch his face and fingerprints with a random passerby. As soon as Koji and the others got to her salon, they witnessed Aya and the other man exploding. Kira also killed Shigechi as a warning not to mess with him.

Suddenly, Morioh changes direction causing Arrow Cross House to spin to the left. A soldier in a SDF helicopter above the dome loses his balance and slides along the dome. Fukashigi also goes flying from the force and lands on top of his Stand NYPD Blue, which appears as a chubby bald middle-aged man in a suit. NYPD Blue is sentient, believing that he's a cop from New York. Koji uses Blue Thunder to save the soldier, who gives him a top secret message for Morioh's mayor. The message stated that if nothing changes, the American army will flip the island. Koji shows them a picture he took on his cellphone, showing the former president of the United States, Funny Valentine (Universe 37), holding up a note with the message. Five people had been president since Valentine and he had to be more than 80 years old, but still looked much younger and was in perfectly good health. They wonder why Funny was there in person on a helicopter rather than talking to his grandson, The Funniest Valentine, the current president of the United States. Funny's son was named Funnier Valentine, who was an astronaut and still in service at the age of fifty. They look up to see that Funny was having trouble getting back on the helicopter and falls off after knocking off the dome ceiling. However, he suddenly stops in mid-air and zig-zags through the air up to the helicopter using his Stand. As the helicopter flies away, a loudspeaker in the distance declares that Morioh will have an emergency meeting at the Budogaoka gymnasium and all citizens must attend. Rohan says his temporary goodbyes to Reimi as she could not come with them and the Nijimuras and Koji tease him for flirting with her. Jorge questions whether he should come with them because he isn't a Stand user, but everyone convinces him to because he's the detective and has to solve the case.

Muryotaisu summons his Stand Grand Blue, manifesting as three dolphins named Jacques, Enzo, and Johana. The group gets onto a dolphin and fly away toward the school like rockets. The flight was much gentler than physics would ordinarily allow because of Muryotaisu's ability. Koji felt unsettled about how empty the roads were. By the time they reached Jozenji, they found the temple had burned to the ground. The remains of the walls and floor were covered in drawings of moths and the citizens there had set themselves on fire. Jorge and Rohan realize that since this place had some sort of mass hysteria, it might also happen at Budogaoka gymnasium where all of Morioh's anxious citizens were gathered. They quickly head to the gym on Grand Blue, finding thousands of people pouring gasoline on each other when they arrive. They acted as zombies, constantly muttering "scared" in a trance. Rohan tried using Heaven's Door but everyone's books were filled with the word "scared" and there was no white space left for him to write any orders. Jorge realizes they could probably alter the conditions of the hysteria by destroying the locked room. Koji uses Blue Thunder and enlarges his propellers until they fill up the entire gym. His Stand becomes a giant shredder and tears apart the walls and ceiling of the gym. As the locked room disappeared, everyone had come to their senses, wondering why they were covered in gasoline.

Rohan and Jorge wonder if there was anyone there who could be Kira. He would have to grab someone on the way to the beauty parlor but Kira was a careful man who couldn't rely on coincidences like that. Beauty parlors rarely have male employees, but Aya had a man who helped with her secret business. According to Yamagishi, the man was middle-aged and not bad looking. Rohan states just standing around watching people won't get them anywhere so he heads to Koji. The mayor of Morioh, Denta Shishimaru, thanks Jorge and the others for saving everyone. He was terrified that his own secretary tried burning him to death, though his secretary retorts that the mayor poured gasoline on him first. Shishimaru questions how they all flied but Jorge denies having flied there. Jorge heads out of the gym and sees that Arrow Cross House was shaking from side to side, which was the SOS signal that they decided on. Using Grand Blue, they quickly fly back to Arrow Cross House. Reimi states that people from the harbor suddenly tried burning the house down but she stuck them all under the house with her ability, and the house shaking was just a result of the battle.

Exhausted, Jorge lays down on a rug in Rohan's study, but he feels a strange lump under his back. He peels the rug back and finds a door in the floor. He opens it just to find that past the door is an exact replica of the room he was standing in. He realizes that it wasn't a room in the Arrow Cross House, but was actually Cube House. Jorge calls for the three dolphins to take him to the room below but only Johana responds to his request. Jorge and Johana find several doors but they all led to identical rooms, leading Jorge to learn that Cube House is a habitable tesseract. The Stand followed a bizarre set of rules that defied logic and physics. Jorge suddenly hears a door that he had never opened slam shut and calls out but gets no answer. As Jorge headed back up, Fukashigi calls for him to come out and look at what was happening outside. In the distance, Jorge sees Nero Nero Island, the headquarters of a mafia group called the Passione Family, had suddenly started traveling very quickly across the ocean towards Morioh.