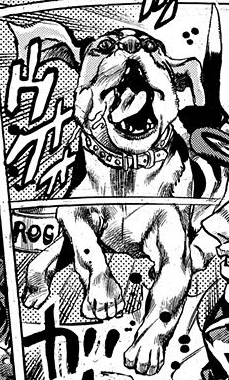 Rocky (ロッキー, Rokkī) is a minor character featured in the one-shot Deadman's Questions.

The dog attacks Yoshikage Kira when he senses the ghost's presence in his apartment.

Rocky is a small dog with spots on his skin. He wears a collar.

Rocky is a dog living with Yamaoka and a wanted criminal. Rocky sensed Yoshikage Kira's presence and attacked him, which left his master worried that somebody was inside the house. Kira tries to pick up a knife while avoiding Rocky, but ends up stumbling on the dog's master, and temporarily loses his limbs.

Rocky jumps at Kira, but Kira passes through a wall at the last moment, making the dog hit the wall head-on. Rocky is last seen with Yamaoka, who worries that the criminal she was living with was injured by somebody.[1]