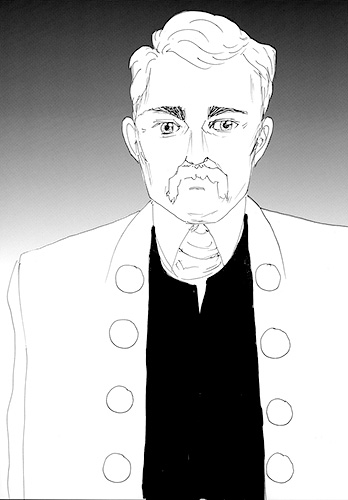 Mr. Benn (The Remains of the Day)

He is the husband of Harriet and the father of Steven, Kenton, and Darlington Motorize. Ben is initially antagonistic towards George Joestar (Universe O) but later becomes neutral.

Ben is a large middle-aged man with short wavy hair and a thick mustache. He is shown wearing a suit.

Ben is a stubborn and rash man, who is described by his daughter to always get his way when he makes up his mind about something. He goes as far as strong-arming his friends in the justice department to ignore juvenile laws so that George would be charged as an adult for a crime he didn't commit. He cares more about his noble reputation than the wishes of his family, not allowing Kenton to get a job despite her wanting freedom.[2] He also claims to want revenge on George but is actually just protecting his own reputation because his son is also a suspect for the crime. He loses his motivation and desire for business when he fails to get his way in the trial.[3]

At some point, Ben marries Harriet. In 1887, they have their first child, Steven Motorize. Soon after, they have Kenton in 1888, and Darlington in 1889.

As soon as George Joestar arrives home from Rome, Ben has George arrested for Kenton's murder despite George being innocent. Ben has many friends in the justice department and strong-arms them into ignoring juvenile laws to charge George as an adult at age 16 with first degree murder. Darlington admits that the trial is a mess and that everybody knows it's only happening because of her father wanting revenge for Kenton's death. She states that once Ben makes up his mind about something, he sees it through to the end and always gets his way.[2]

Three years later, Steven ends up being a suspect. Ben wants to protect Steven as well as the reputation of the Motorize family so he tells Steven to go work in France to get away from everything until it settles down. Ben worries that if Steven is arrested, they would force a guilty verdict to do military experiments on him because of his ability to grow wings.

After the Kenton murder case ends up impossible to prosecute further, Ben Motorize loses his desire for business. He withdraws from it and goes on a retirement trip to a resort town in Miami, leading to Darlington running the estate and business along with William Cardinal taking over the Motorize family's affairs.

In the following years, Ben and Steven research methods of reviving Kenton. They learn of a folk religion named Vodou which uses sorcerers named Bokor. Bokors have the capability of chanting spells that cause the dead to revive as zombies. They learn about the Stone Mask and Windknight's Lot and then find out that Poco and Poco's sister are the only survivors. At first, Ben tries offering money to get Poco and his sister to tell them everything, but showing them a picture of Dio Brando and mentioning his name ends up being more effective. Ben and Steven then investigate the ship that Jonathan Joestar and Erina Pendleton went on for their honeymoon, and later travel to La Palma to learn more about incidents surrounding the Joestar family. They finally end up finding Straizo's group of Ripple warriors. Steven works with them for some time and decides not to revive Kenton after encountering real zombies.[3]

On November 11, 1920, Antonio Torres kills Ben and the rest of the family and turns them into zombies. George finds half-eaten bits of them twitching and pulsing.[1]