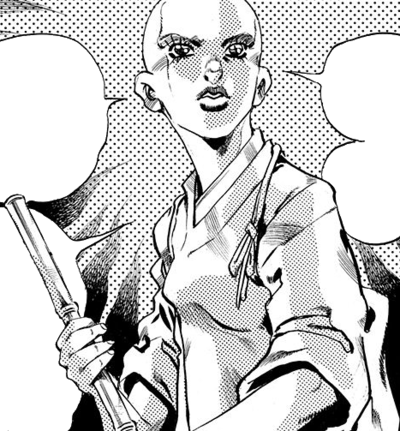 The monk is a mysterious woman who gives Yoshikage Kira a series of tasks to be accomplished.

The monk is a thin woman of medium height. She is bald and wears a rakusu.

Not much is known about the mysterious monk's personality. As a monk, she is shown to be peaceful and quiet, but acts in a serious and questioning manner when she asks why Kira does not choose to go to the Spirit World.

The monk is able to see ghosts, allowing her to see Kira without any problem, most likely because she possesses a high level of spiritual excellence as a monk.

The female monk meets Yoshikage Kira, a vagabond spirit who has no goals or any direction, due to having no memories from when he was alive. Kira ends up working for the monk, doing the "dirty work" of killing the targets she gives him for money. He is sent to kill an on-the-run child murderer hiding out in an apartment with his significant other, Yamaoka. After a convoluted attempt to enter the apartment due to the rules of being a ghost, the target is eliminated.

Later, Kira goes to the monk again, who gives him the task of go to a "mansion ghost". That mansion was once the house of an old army officer 50 years ago, but towards the end of the Pacific War, City S was under heavy air raid by the American military. The officer's house was targeted and blown to pieces, but nobody died there. The officer himself lived 50 years after the war and died at the age of 82 from old age.

For unknown reasons, the house itself became a spirit and is still standing. 56 people committed suicide or died strange deaths in the house's area, so the monk sends Kira to find the reason for this and take care of it. She asks Kira why he doesn't move to the Spirit World and if he has some sort of goal, but Kira asks her how she could be so sure about the Spirit World's existence, as she was still alive.

In the mansion, Kira is attacked by Cleansers, who take his arm and almost erase him from existence. However, Kira leaves the mansion to investigate the information the monk gave him, believing she gave him the assignment in order to have him "cleansed" and sent to the Spirit World. The monk's fate remains unknown as Kira promises that he'd kill her himself, so that she can see if the Spirit World really exists, wondering if her arm could replace his lost one.[1]