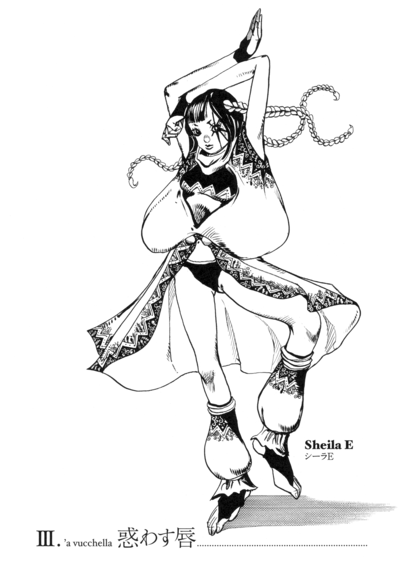 Fugo, Murolo, and Sheila E continue their investigation in the Strait of Messina while a labors' strike - presumably ordered by Passione - leaves the port as a ghost town. At a warehouse, Sheila E unveils her Stand Voodoo Child which can turn anything into pairs of lips that uncovers anyone has said, thought, or felt in the vicinity. Fugo remarks how this reflects Sheila E's former objective to hunt for clues and kill her sister's killer. He recognizes one of the lips' voices as Volpe's and it repeatedly utters the words "obey you". Sheila E deduces that Volpe feels guilty about following Kocaqi's commands, although Fugo isn't sure himself. Confirming the Sezione Droghe's whereabouts in Taormina, the three head to the harbor to board a yacht that Fugo recognizes as the same model as Bucciarati's Lagoon yacht.

Fugo reminisces on the day when the team boarded a yacht to find Polpo's treasure in Marina Grande, Capri along with then-newly recruited Giorno Giovanna. When Fugo shared to Abbacchio about his speculations about Bucciarati becoming a capo while trusting Giorno, Abbacchio only told him that speculating was his weakness. The team took a picture with the yacht behind them by Narancia's suggestion, while Giorno captured the photo for them. In the present, as Murolo prepares to dock to Sicily, Fugo wonders where the photograph is after knowing that it never got developed. Sheila E notices Fugo lost in his thoughts and snaps him out of it, thinking that his past with Volpe is holding him back from confrontation. She warns him not to take drugs lightly as it devours a human's soul and spreads the suffering to the people around them. Fugo notices that she quoted Giorno's words and sees the same spark in her eyes like Narancia when he began to trust Bucciarati.

Another flashback details Fugo and Narancia's first meeting. Fugo had been running late for a meeting with Bucciarati when he saw Narancia picking scraps and felt pity for him, so he brought him to the restaurant to eat. The restaurant owner confronted Fugo about his actions, complaining that bringing in Narancia would attract more homeless kids and that the restaurant preferred better class of customers that aren't poor. Enraged, Fugo slammed his fist on a plate and left. Six months later, he met Narancia again who was asking if he could join their gang out of gratitude. Fugo initially discouraged him, but after seeing his old self in Narancia, he gave him a chance by unveiling his Stand Purple Haze to test if he could see it. After Narancia proved he can see the Stand and Fugo agreed to help him pass Polpo's test, the two quickly bonded as friends. By the end of Fugo's flashback, Sheila E notices that it is beginning to rain.

Murolo anchors the yacht on a rocky coast and the three make landfall on a lifeboat by using Purple Haze and Voodoo Child to carry it over a cliff face. Sheila E uses her Stand to throw a boulder at the yacht and sinks it in the water. Fugo observes the strange easiness in getting to Sicily, wondering how the narcotics team had managed to slip through Giorno's hands and why he was personally handpicked to take the team down. Sheila E notices this and interrogates him for his honest thoughts about Giorno although she remains dubious. Quoting Giorno once again, she mentions that people are often overwhelmed by him that when they see him, they wind up seeing only themselves, which means that Fugo's words on Giorno's untapped potential was only him reflecting on himself. The conversation is cut short when Murolo warns them for talking about Mista and Giorno lightly and Sheila E running off to track down a vomit-like scent.

While tracking down the scent, Sheila E thinks that whoever threw up was under the influence of Volpe's Manic Depression. Suddenly, a flattened Zucchero appears from the ground and ambushes Sheila E before a brief fight ensues. Sheila E uses her Stand to give Zucchero lips to which he only repeats that he "has to move". Suddenly, his body explodes to dust. Sheila E soon realizes that Zucchero had been a bait to lure her away from Fugo and Murolo.

(Mentioned only)
All Along Watchtower