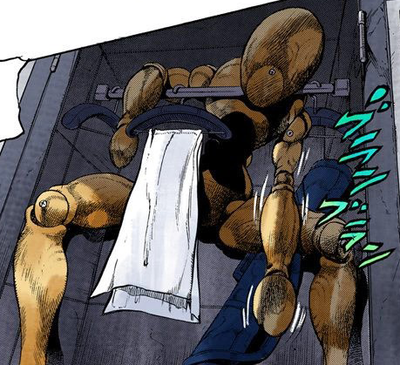 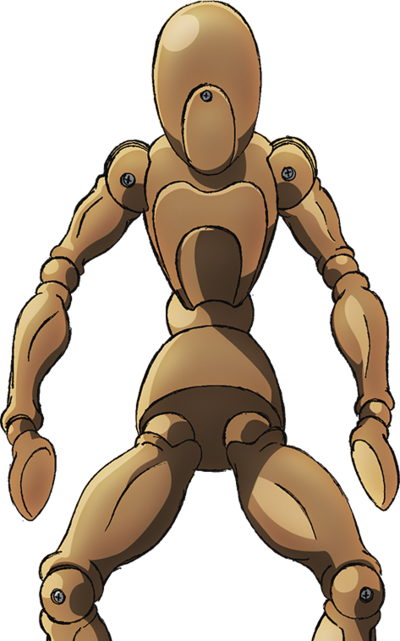 Destructive Power
B
Speed
B
Range
C
Stamina
B
Precision
C
Developmental Potential
C
A
B
C
D
E
A: Very Good
B: Good
C: Average
D: Poor
E: Very Poor
“
Whatever poses this mannequin makes, the person I copied moves to match. It's not the puppet. It's the puppet master.
”
—Surface, Chapter 290

Surface (サーフィス（うわっ面）, Sāfisu) is the Stand of Toshikazu Hazamada, featured in the fourth part of the JoJo's Bizarre Adventure series, Diamond is Unbreakable.

Initially a large but ordinary wooden mannequin, Surface will become a perfect doppelgänger of whoever first touches it. Upon transforming, it reveals the power to take control of that person's movements.

Surface is a wooden, human-sized mannequin like one that an artist would use for pose references. It has a plain design with a flat face, ball joints, and a screw in each knee and shoulder along with one in the forehead. When activated, it will perfectly replicate whoever touched it down to their fingerprints, voice, and even mannerisms.[2] The only difference is that the screw on the forehead remains.[3]

Judging by the screw on its face, it might have been based off Perman's eponymous robot character.[4] This is further made clear by Toshikazu himself through Surface, who compares Surface to the robot from Perman.

Since Surface is bound to a regular doll, it has no personality until it mimics the appearance of another person. It will then replicate the personality of whoever it has copied, even talking down to its user depending on who is copied.[5] Despite this, the Stand is overall completely loyal to Hazamada and will betray the personality of whom it has copied to aid him, such as when Surface slyly and suddenly bashes Tamami Kobayashi's head with a rock when Josuke Higashikata, whom it was copying, would not.[6]

Although physically underwhelming, the only noteworthy characteristic being its speed,[7] Surface is a menacing Stand because of its two powers of mimicry and control over people.

Surface's primary ability is to copy the appearance of another person.[7]

If the mannequin is touched by someone, it will perfectly copy that person's appearance, voice, and mannerisms, down to the fingerprints, as noted by Josuke.[6] However, a screw on Surface's forehead enables people to tell them apart. As a Stand bound to a mannequin, no damage done to Surface will be reflected in Hazamada.

Surface remains a wooden mannequin on the inside, causing Hazamada to hurt himself when punching his Stand.[5] If a piece of the mannequin is cut off, that area will return to its wooden state.[5]

When Surface impersonates someone, it can force that person to imitate its movements.[7] This prevented Josuke from hitting it by standing still, making it impossible for him to move and strike it - even with his own Stand due to its limited attack range. However, Surface and the victim must stand face-to-face for it to work.[8]