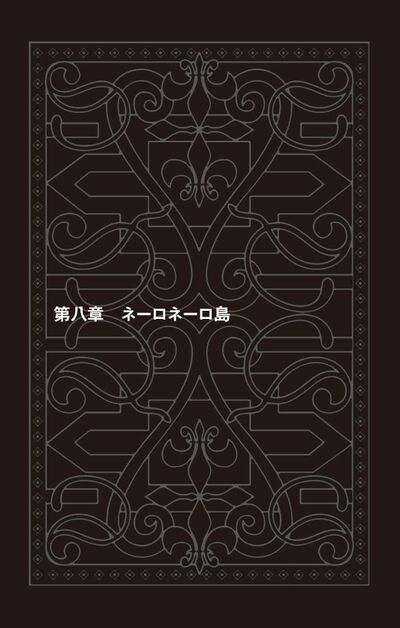 Jorge recalls all of the recent events and wonders how many Stand users are actually in Morioh. Meanwhile, Muryotaisu takes out a telescope and a pair of binoculars from Arrow Cross House for recon purposes. Jorge warns Muryotaisu not to go back into Arrow Cross House for a while because he thought he saw someone suspicious hiding inside Cube House. However, Muryotaisu then goes back in to set up a hidden video camera. Fukashigi uses the binoculars and discovers that the island sailing towards them is foreign and not part of Japan. After reading a sign stating that it is Nero Nero Island, Jorge explains how it is the headquarters of the Passione family. The group has about three hundred members with several Stand users, and nobody has met their boss aside from knowing that his name is Diavolo. Muryotaisu spots a truck racing down the road to the harbor and says that people in the back of the truck are waving at them for help. As Jorge attempts to see for himself, the truck suddenly bursts into flames. The citizens on the truck are then murdered by suspicious figures with Stands. Desperate to go help them, Muryotaisu summons Grand Blue and flies off into the sky, despite being unable to leave because of the barrier around Morioh. Fukashigi yells at his Stand NYPD Blue for being unable to do anything, but NYPD Blue retorts that he's gathering evidence to arrest all of those criminals. From his stomach, he prints out copies of Dolcio Cioccolata's criminal records from Interpol, the Italian police, the CIA, and the FBI. The records reveal that Cioccolata had sold drugs in America and was also involved in terrorist activity. He spots Secco Rottario among Cioccolata and other Passione members, who were all killing ordinary citizens. NYPD Blue broadcasts the footage live to all four police organizations.

Muryotaisu desperately tries breaking through the barrier to no avail, as Fukashigi and Jorge watch helplessly. When the slaughtering finally concludes, Jorge sees the Passione members moving the bodies out of sight by dropping them in water or hiding them in tall grass. Jorge wonders whether Nero Nero Island is affiliated with America or if they also received the same threat from Funny Valentine that he gave Morioh. Just then, Nero Nero Island collides with Morioh, but the collision of the two barriers propels Nero Nero Island upwards. Insect-like legs suddenly emerge from under Nero Nero Island as it crashes through Morioh's barrier and lands in the harbor. Jorge, Muryotaisu, and Fukashigi freeze in shock. Grand Blue starts shoving Muryotaisu and chirping at him to wake him up, while NYPD Blue then fires a shot in the air to wake everyone up. As they're about to retreat, Jorge remembers Reimi and goes back for her. Rohan then appears behind them flying with Blue Thunder, and says that he'll ensure Reimi is safe himself.

Jorge follows him back to Arrow Cross House anyways. However, Reimi states that Cube House is the safest place for her to be as nothing would affect its walls. Jorge decides that they should all escape into Cube House, but Reimi is unsure whether its old power still exists since it transformed into Arrow Cross House. Jorge then demonstrates that Cube House simultaneously exists with Arrow Cross House, revealing the hidden door below Rohan's rug. Jorge reveals that someone might be hiding down there and asks Rohan for anything he could use as a weapon and escape gear. As Rohan gives Jorge a golf club, Reimi warns Jorge that it's a bad idea to go into Cube House as it's meant for a single occupant. If two people are running around in different rooms there then it could cause severe contradictions, leading to one person possibly being trapped in a parallel universe. Rohan worries about what may happen if they go in now, but Reimi assures him that since she is the owner of Cube House, she can decide where the floors, ceilings, and walls are. The three safely descend into the first room of Cube House and then Jorge goes further into below rooms to investigate. Eventually, Jorge checks every room but they are all empty. Reimi then screams after checking the camera. Tsukumojuku Kato is on the screen. Despite being dead, he walks up to the camera and laughs saying that he guesses his life entirely belongs to Jorge Joestar, before he then vanishes.

Jorge leaves Cube House, wondering what everything means, and how he could keep the citizens of Morioh safe. Running through Morioh's suburbs, someone from Nero Nero Island starts absently shooting at Jorge from above. Jorge manages to hide from all the bullets and reunites with Koji, who is hiding in the garage on the other side of the rubble. Koji uses Blue Thunder on Jorge, allowing him to fly. The two fly through the neighborhood and find the Nijimura brothers in a factory. Koji states that several Passione members jumped into Morioh and kidnapped all the citizens in the school gym. According to NYPD Blue, Dolcio Cioccolata's Stand vacuumed them all up like it was a tornado. Fukashigi anguishly asks NYPD Blue to do something instead of just recording evidence, but NYPD Blue lectures him that the mature thing to do is sit and wait rather than diving empty-handed into a war. Koji explains that Passione is using Mayor Shishimaru to relay orders and now they're dragging Stand users into the open, promising not to harm anyone if they come forward on their own accord. NYPD Blue theorizes that they're trying to kill their boss or they already did, and now they're cleaning up.

The town's loudspeaker then broadcasts a message ordering detectives Daibakusho Curry, Runbaba 12, and Jorge Joestar to hurry to the Budogaoka Academy Garden. The other two detectives were also from Nishi Akatsuki like Jorge. Jorge decides to head to the garden and sees a young Italian man in a suit standing next to Morioh's mayor. Mayor Shishimaru tells them that the phone on the table in front of them will start ringing, confusing Jorge as the table only had a filthy rubber ball, a shoe, and a pebble. Suddenly, the pebble starts ringing and vibrating like a phone, and Jorge realizes that it is a Stand. Jorge accepts the call and the young man on the other end could also speak Japanese. The caller tells Jorge that he wants to hire him as a detective, but Jorge refuses to accept unless the man states his name. He obliges, revealing that his name is Haruno Shiobana, but he usually goes by Giorno Giovanna. Giorno asks Jorge to look for Diavolo. He says that the man with them right now is Bruno Bucciarati, whose team will be working with them. Bucciarati is the leader, Giorno is in charge of communications, and the other three members will each individually accompany the three detectives.

After Giorno hangs up, Bucciarati warns Jorge not to lie since he can smell when someone is lying. He then assigns his team members to each detective. Leone Abbacchio accompanies Daibakusho Curry, Guido Mista accompanies Runbaba, and Narancia Ghirga is assigned to Jorge. Jorge takes the pebble phone, Daibakusho Curry takes the rubber ball, and Runbaba takes the shoe. Suddenly, Jorge sees Tsukumojuku standing next to Narancia. Tsukumojuku tries grabbing Jorge's shoulder, but Narancia gets in his way. In that instant, the three of them are teleported far away. Tsukumojuku brushes off that he brought an anomaly along with him since it must mean something and then he vanishes, leaving Narancia and Jorge alone on the H.G. Wells spaceship headed to Mars.