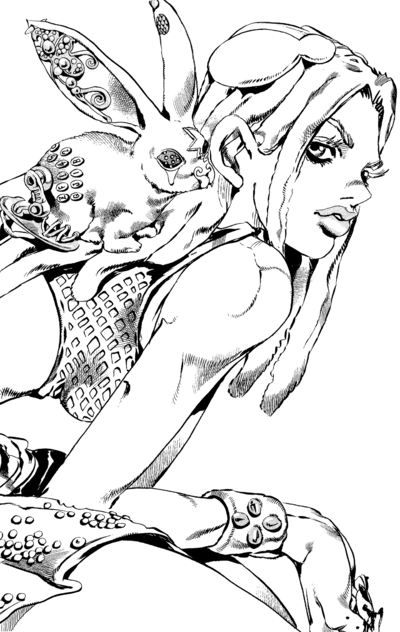 A young girl from Rome with an unstable Stand ability named The Cure, Coniglio is unwillingly roped into the fight between Team Bucciarati and Sogliola Lopez.

Coniglio is a 17 year old Italian grl depicted as having a svelte body and light hair. She wears a mesh top, a studded miniskirt and wristbands.

When she was younger, Coniglio was described as a tomboy. Many fights started near her and she would participate in them. Thanks to The Cure healing her, Coniglio easily won her fights and she was soon known as a troublemaker. During the same period, Coniglio grew close to her older brother since he was the only one with her during the evening while both of their parents worked. When her parents divorced, Coniglio felt more sad about having to leave her brother than about her parents.

Over the years, Coniglio became an ordinary, more peaceful young girl. However, when her classmates ostracized her for having supernatural powers, Coniglio became more withdrawn and took to reading books instead of socializing. She eventually became a passive and hesitant girl. For instance, she accepted to work as a maid in her grandmother's place to have something to do and became comfortable with the routine. However, Fugo's appearance and the massacres caused by Purple Haze shocked her. In short succession Coniglio had to witness one of her colleagues die in front of her and blamed herself as she could have saved her. This incident caused Coniglio to eventually become more proactive in saving those around her. Coniglio eventually managed to tame her Stand and decide to go overseas to actively help people.

The Cure is a little rabbit-like Stand who can absorb the suffering and any illness from those it touches. Thus it has a powerful healing ability, enough to cure people from Purple Haze's virus.

Coniglio's youth was marked by emptiness. She doesn't remember when she acquired The Cure but it has been at her side for most of her life. When she was little she used to always get into fights with the little boys in the neighborhood as The Cure absorbed and released pain, aggravating relationships around her. Because of her never reporting injuries from these fights (The Cure healed her after every battle), she was nicknamed "Coni the immortal". One day, while attending Junior High School, Coniglio used her Stand to heal the scratched knee of her best friend but the friend got scared and told the classroom about the accident. Since that day, Coniglio has earned the nickname of "Coni the witch", losing all of her friends and becoming more and more introverted. Coni also had to live through her parents' divorce but was most sad about having to leave her older brother since he was the one she was closest to.

Two months before the events of the novel, Coniglio's grandmother went missing in Venice. Coniglio and her mother went from Rome to Venice to search for her. When the staff asked Coniglio to work as a chamber maid in a hotel in her grandmother's place, she accepted. Sogliola Lopez, the Passione capo stationed in Venice noticed her and kept note of her abilities. After Bruno Bucciarati's gang went traitors, Coni was embroiled in Lopez's plan. The capo sent Fugo to unleash Purple Haze's virus at her hotel. Coniglio was caught in the attack but survived thanks to The Cure but witness her friend be killed by Purple Haze. Paralyzed by fear, Coniglio blamed herself for her inaction. After the attack she was found in a state of shock and sent to the hospital to recover and be interrogated about the attack. That night, Fugo used Purple Haze again but Coniglio gathered the nerve to use The Cure on the patients who were hit by the initial release, saving all but one.

Feeling guilty about the last patient, Coniglio went back to her home with her mother and slept only to awaken the next morning by Fugo. Fugo unleashed Purple Haze again but this time talked to her, assuring her that she could save everyone. Coniglio tried to absorb the pain and illness of Purple Haze's victim but The Cure absorbed so much of the pain that it went berserk and Coniglio lost consciousness from the pressure of trying to save everyone. After having lost consciousness, the girl recovered inside St Mark's Basilica with Bucciarati's help since The Cure had been carrying her on its back throughout the city. Awoken by Giorno and remembering Fugo's words, Coniglio managed to call out to her Stand and calm it, ending the massacre.

Later, Coniglio decided to leave Italy to atone. Stories of a kind woman curing the lost appeared all over the world, with Coniglio eventually immigrating to Illinois to use her power for good. 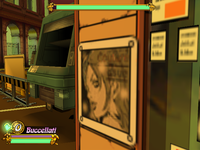