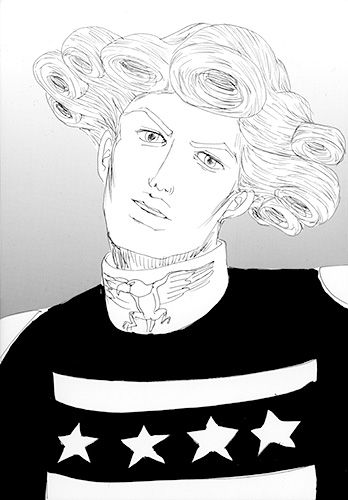 Explodes in an escape pod from U-Boat's missile[3]

Funnier Valentine (ファニアー・ヴァレンタイン, Faniā Varentain) is a tertiary antagonist in the 37th universe, featured in the light novel JORGE JOESTAR.

Funnier is a Stand User who wields Rear Window, which can create windows on any surface and assassinate people with its gun. Funnier is a fifty year old astronaut and is the pilot for the first ever manned flight to Mars. He is the son of the Funny Valentine from the 37th universe and father of The Funniest Valentine.

Funnier Valentine is a tall man with a fit build. He has thick, angled eyebrows and long curly light hair styled in the shape of a UFO, which curls around the ends into several thick rings.

Due to his age, he has a few wrinkles. He wears a dark long-sleeved uniform with three rows of stars and four rows of stripes imprinted in the center on both the front and back. Under his outfit, he wears a light turtleneck shirt with America's bald eagle symbol displayed on the collar in front of his neck.

He also wears large circular light pads on his shoulders and elbows. Like his father, he sometimes wears a pair of gloves with a net pattern on the upper half.

Funnier is a serious and dignified individual. He is formal with even his own son, calling him "President", rather than by name. As the captain of the astronauts on the H. G. Wells spaceship, he is respected by his peers and comfortably gives out orders to them. Despite his spaceship having just a few minutes left before it explodes, Funnier remains calm. However, Jorge Joestar notes that Funnier doesn't seem to be at ease because he is confident in his crew's abilities, but rather has some other ulterior motive. He believes in fate, thinking there must have been some reason why Jorge was brought to his ship.

Funnier eventually reveals himself as a deceptive man, going as far as assassinating his crew members without remorse to achieve his goals. He is curious about the goal of Enrico Pucci (Universe 37) wanting to achieve the way to Heaven, thinking that Pucci acts selfishly for a servant of God. He is intuitive about the true natures of people. Before Funnier attacks his crew, he gives his thoughts about their personalities, such as stating that Pucci is actually a sinner who only became a priest because it made him feel good about himself. He loses his calm demeanor when his first attempt to kill Goyathlay Soundman (Universe 37) fails and he starts shooting more recklessly with his Stand.[3]

Funnier's Stand can create 'windows' in any type of frame, or anything that resembles a frame. Rear Window is capable of moving through the windows it creates and has a very long range. It can be used for spying or assassinating, as the Stand also wields a gun that can fire a significant number of bullets.

Funny, Funnier and The Funniest Valentine

Funnier Valentine was born in 1962. Unlike his father, Funnier became an astronaut and started training at the Kennedy Space Center. In July, 1997, a metal plate from a Giotto probe fell from the sky, destroying Enrico Pucci's home and killing his family. The plate had a message inscribed on the back with fourteen words and a method of reaching Heaven. Funnier was out in town that day and sneaking back to his base when he witnessed the incident. He used his Stand Rear Window to read the message on the plate, and after that, he never sneaked out again.

In 2001, he was the pilot for the first ever manned flight to Mars, and ended up on the news a lot afterwards.[3] In Mars, Funnier met the 37 Kars, and helped them create a plan for re-entering Earth. They negotiated a mutually profitable arrangement where in exchange for Funnier's help, Kars will agree not to eat any Americans. Kars accepted the offer and waited for the astronaut's next arrival.[4]

Funnier among his crew

Aboard the H.G. Wells Spaceship, Jorge and Narancia are caught and tied to a bed by Captain Funnier Valentine and his team of astronauts. Narancia tries attacking Goyathlay Soundman but Funnier summons Rear Window, which emerges from Narancia's mouth and holds a gun to his forehead. Funnier threatens to kill Narancia before his Stand U-Boat's missiles explode unless he holds his fire. Narancia also had U-Boat within his own body, and fires a missile toward the arm sticking out of his mouth. However, Funnier's Stand dodges and Narancia ends up exploding his own teeth off. Funnier's Stand appears again and fires bullets from behind Narancia, but all of the bullets explode before they could reach his head. Narancia had been deflecting each bullet with U-Boat's missiles.

Later, their spaceship is caught by a mysterious giant eyeball referred to as The Eyed Balloon. Funnier's son, president The Funniest Valentine, gives them orders through the loudspeaker to escape from The Eyed Balloon's tentacles in ten minutes or else they will remotely detonate the spaceship along with the astronauts inside. Funnier accepts his son's orders, but Jorge senses that he has ulterior motives.

Funnier orders Pocoloco Tripleseven to think of a way to cut the tentacles off the ship as well as to find the ship's explosive device. Funnier asks Jorge what he thinks about Pucci's goal of reaching heaven and explains Pucci's backstory. Afterwards, Pocoloco declares that the plan is ready, but Funnier ignores him and then suddenly assassinates Pocoloco with Rear Window's gun. Funnier then shoots Narancia as well and insults Pucci for being a self-absorbed sinner. Funnier reveals that he has been negotiating with Kars for eleven years ever since he read the message on the metal plate that fell on Pucci's house. 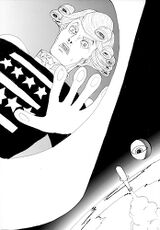 Funnier before his death

After Funnier shoots Pucci, Soundman manages to absorb all of Mars's sand, growing his body into a massive pillar of sand. Jorge grabs Narancia's knife and tries to stab Funnier but the astronaut dodges and disarms Jorge, stabbing Jorge in the shoulder instead. Rear Window shoots Soundman several times, but his Dune morphs the shape of his sand to absorb the bullets. Hidden within the sand covering his body, Soundman couldn't see or breathe and attacks wildly. When Jorge yells that Funnier is escaping in the pod, Soundman moves the sand from his face to take a breath, but is instantly shot between his eyes by Rear Window.

As Funnier escapes, he laughs over his presumed victory and says goodbye to Soundman and Jorge. However, Narancia reveals that U-Boat caught the bullet in his forehead so he didn't actually die. He fires a cruise missile which collides with the escape pod, killing Funnier.[3]