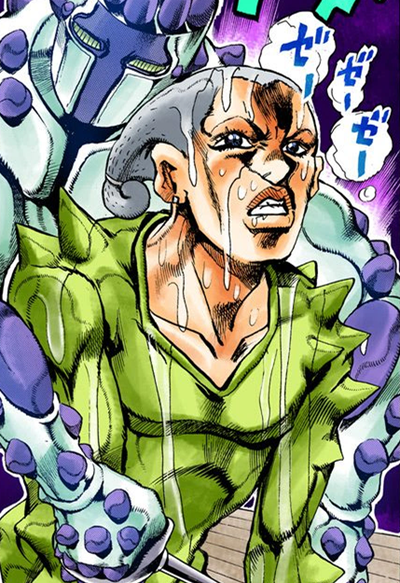 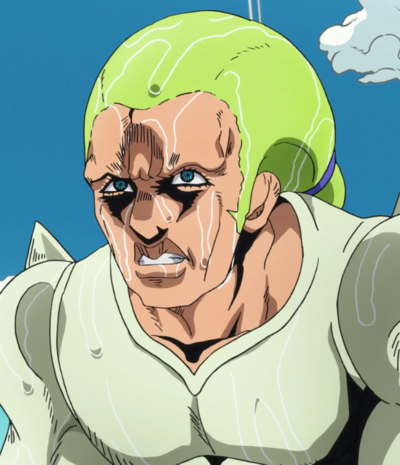 Obliterated via Manic Depression (Novel only)

Zucchero is a Passione operative and Sale's partner, but also a Stand User. He ambushes Team Bucciarati with his Soft Machine for the possession of Polpo's treasure.

Zucchero is a man of average build and height, keeping his hair attached in a strange-looking ponytail that points straight back before curling at the end.

Zucchero wears a long sleeve collarless shirt with spikes on his shoulders, sleeves, and back. He has long pants that cover his feet, acting as boots.

In general, Zucchero is a careless man
Mario Zucchero is a vain and careless individual compared to his partner Sale: when asked what he would do with 6 billion lire, Zucchero answers that he would spend it on vacation trips and women,[5] not thinking about how the money could help him rise within Passione. His first appearance shows him driving despite not paying much attention to the road, to Sale's frustration.[6] He is also reckless, suddenly jumping out of a car in the middle of driving as soon as he heard of Polpo's treasure, leaving Sale in the passenger seat of the moving vehicle.[7] Despite this, the two still work together to oppose Bruno Bucciarati's team of six by themselves. Zucchero's choice to immediately confront the entire team head-on indicates a level of calculated confidence in his Stand's ability (or his own simple foolhardiness).

In battle, Zucchero is skilled at sneak attacks and ambushes, having managed to hide a boat on top of another in order to set up his attack on Bucciarati's team.[8] Using his Stand ability, Zucchero stealthily picked off members of a squad that would otherwise overwhelm him with ease in mere moments.[9] However, he is also rude and demanding, violently threatening Bucciarati when he has him cornered in his boat and repeatedly shouting curses in the process.[10]

Zucchero's Stand, Soft Machine, has the ability to deflate people and objects by stabbing them with its short sword.

Mario Zucchero is a gangster hailing from Rome and working for Passione alongside his partner Sale. After Polpo's death, Sale mentions the existence of the late capo's treasure, which interests Zucchero since he could spend it on luxuries. Sale shares his hunch about Bruno Bucciarati knowing where the treasure is and Zucchero immediately leaves his car to track the team.

Zucchero manages to find Team Bucciarati. Before confronting them, Zucchero covers a boat with his own deflated boat so that he can hide between the two. Halfway to Capri, Zucchero makes his move. He first deflates Narancia with Soft Machine and hides his body in a pipe, then does the same thing to Pannacotta Fugo and Guido Mista. Giorno Giovanna ends up also being deflated, although he helps his remaining teammates by leaving a fly leading to Narancia.

Leone Abbacchio's Moody Blues tracks Narancia in the pipe and Soft Machine eventually attacks it, deflating Abbacchio. While Bucciarati rages against the boat, Zucchero calls Sale on the radio and informs him that the treasure is in Capri. He then talks to Bucciarati and interrogates him about the exact location of Polpo's treasure, threatening his team. However, Bucciarati has understood Zucchero's trick and opened a hole on the boat to make it sink. Zucchero is forced to cancel the deflation of his boat and reveal himself. He threatens a deflated Abbacchio but Sticky Fingers punches him faster than Soft Machine can stab Abbacchio. His head is detached and he is defeated.

Zucchero is left at the "mercy" of Narancia and Mista. Enraged, Narancia repeatedly kicks his body. Then Mista attempts to interrogate him about his partner. In an effort to torture him, Mista gives him a choice between a fishing line or a pair of glasses, although Zucchero's mouth is zipped. Mista hangs Zucchero's head by hooking his eyelid and tying the line to a handrail, then place the glasses so that the sun begins to burn his eye. He's then forced to witness Narancia, Mista and Fugo dance over his predicament. Bucciarati calls off the torture session as Zucchero is still a hardened gangster who won't sell out his partner. 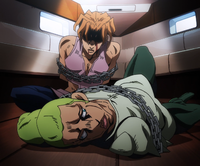 Thanks to Abbacchio's Stand, the group learned that Zucchero has already given off their location and the rest of the plan involving Capri Island. After Sale's defeat, he was left unconscious on the boat.

The information below derives from a source not written by Araki. As such, it may or may not be considered canon.
After Giorno Giovanna becomes the boss of Passione, he orders Zucchero, Sale, and Pannacotta Fugo to make amends. The mission given to them is to target Massimo Volpe and the remnants of Passione's Sezione Droghe.

Lured by Angelica Attanasio's Nightbird Flying, Zucchero and Sale discover the hideout of the Sezione Droghe in a warehouse at the edge of Villa San Giovanni – a small town on the Strait of Messina. Zucchero uses Soft Machine to deflate himself and Sale so they could get close to their targets. However, Zucchero is caught by Massimo Volpe who easily defeats him with Manic Depression, making it impossible for Zucchero to control his body. After Vittorio Cataldi kills Sale elsewhere in the warehouse, Massimo drags Zucchero's deflated body into the room and tosses him aside. Vittorio takes interest in Zucchero's body as it resembled a plastic sheet, taunting that he has bad luck because they had Angelica on their side. He stomps on Zucchero's body, although is grossed out afterwards when he realizes his heart was still pulsing. Vittorio continues to toy with Zucchero's remains nonetheless.

Later, Zucchero is interrogated by Massimo and his team. Draped on a chair in front of him like a flattened, wet shirt hung to dry, he could barely produce any audible sounds. Despite his lack of speech, Massimo could understand Zucchero's words based on his lip movement, discovering that Fugo is the enemy of the Sezione Droghe as well.

Vladimir Kocaqi uses Zucchero as a decoy to separate Sheila E from Fugo and Cannolo Murolo. Sheila smells vomit and realizes it must have been from someone under the influence of Manic Depression. Just as she reaches her deduction, Zucchero travels through the flattened ground, poised to poke Sheila in the back with Soft Machine's needle, but ultimately misses since she jumps away in time. The rain in their environment was ideal weather for Zucchero, as he could hide in the gaps between the pavement and the water. The weather and his vomit were also masking his scent so Sheila would have difficulty finding him. Sheila continuously talks to Zucchero wondering whether he betrayed them but he provides no response. He could no longer talk and was little more than a mindless robot following orders and reflexive responses.

As Sheila constantly shouts Zucchero's name, Zucchero unconsciously heads toward her in order to strike with Soft Machine's needle. However, his instincts had failed him and he falls into a panic when his needle strikes only air. Sheila had tricked him by using Voodoo Child to echo her voice, creating giant pairs of lips in all the cracks in the ground surrounding Zucchero. Trapped within the teeth of Voodoo Child, his body is stretched as the lips slide across the ground. The only words he could inaudibly utter were "Gotta move" until his body crumples from the effects of Massimo's Manic Depression. Zucchero's bodily functions were escalating so high that his flesh could no longer withstand the force of his blood pressure. Finally, the blood in his veins gushes out everywhere and his body inflates, shattering every bone in his body into dust.

Erases panels at the bottom and replaces them with Zucchero panels