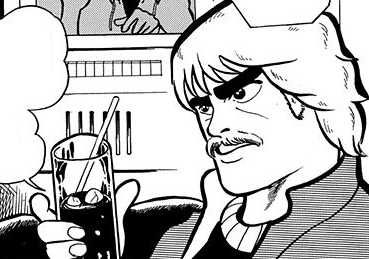 Veteran
Technician
First-in-Command of the Dillinger

Matt Jackson (マット・ジャクスン, Maato Jakusun) is a primary character featured in Say Hi to Virginia. He is a technician and the first-in-command to the cargo ship, the Dillinger. Bored out of his mind, he spends time in his room lazing around but becomes a decisive leader when a bomber threatens to destroy the ship.

Matt Jackson is a seemingly middle-aged man who often dresses in casual attire. He is seen wearing an open jacket over his uniform sweatshirt as well as cargo pants. Matt Jackson sports a neatly trimmed mustache and full head of light hair accompanied by a pair of dark bushy eye-brows.

Matt is a grumbly man who tends to spend his time lazing around the Dillinger as he often finds himself bored. He is also easily irritated, as seen when the ship's A.I. fails to immediately lower the temperature of his room.[1] He has a habit of complaining to his crewmate, Hiroshi, about being in space. However, when the situation calls for it, Matt can turn into a stoic and commanding leader, worthy of earning his title of captain.

Matt Jackson is able to quickly make decisions and issue instructions to his crew and his former position in the Armed Forces lends itself to his advantage in seniority. As the ship's first-in-command, he ensures to log down their travels on a journal.[2]

In his introduction, Matt is listed as the cargo ship's technician. He is extremely familiar with the technology aboard the Dillinger and is able to easily able to interact with many functions aboard the ship, such as Bonnie. Upon learning of the bomb, he was able to intuitively asses the composition of the bomb and the best plan of action to disarm it, as well as guide Clyde through the disarming process.

Matt also has the technical ability to mask himself as an anonymous figure aboard another ship and fake an unknown transmission.[3]

Previous to his position as the first-in-command to the cargo ship, the Dillinger, Matt spent an undisclosed amount of time as a member of the Armed Forces.

Aboard the Dillinger, Matt Jackson fulfills the role of the captain and 1st-in-command, as well as a technician. While playing darts in his room one day, all while complaining about the A.I aboard the cargo ship, he is met with a transmission by Hiroshi about a ship attempting to make contact with them. He sarcastically allows Hiroshi permission to answer their transmission and is thrown off of his couch soon after when the escape pods aboard the ship explode.

Upon being informed by Hiroshi of their situation, he attempts to calm down down his younger crew member, only to be met with more panic. Matt quickly begins to understand the makeup of the bomb, and urges Hiroshi to not act so rash in regards to defusing "Virginia". He discovers that there is an invisible barrier surrounding the bomb after receiving an analysis by Bonnie, as well as a glass vacuum.

Matt quickly gets to work on a safe plan of action to diffuse "Virginia". Him and Hiroshi quickly make their way to the Pilot Room where he begins to explain his plan to his crew member. He states that the first move is to make the entire block where the bomb is contained a vacuum in order to open to lid without triggering the bomb. They will then send in Clyde in order to do the dismantling in the vacuumed out block. The plan heavily relies on Clyde's ability to fit it's hands through the "Virginia"'s invisible barrier, thought he has already had Bonnie preform an analysis on the composition of the bomb. The main goal being to cut the detonation wire within the bomb.

As the plan is set into motion, Matt warns Clyde to take it slow cutting through the glass vacuum. Once the cut is complete, Matt directs Clyde to open up the bomb for defusal, though suddenly stops him as to avoid setting off the barrier. While things seem to go smoothly for a brief period of time, Matt is quickly informed by Hiroshi about a water leak in the block where "Virginia" is being diffused due to the build in pressure in the pipes when the area was vacuumed off. In a series of quick decision making and feedback from Hiroshi, Matt is able to direct Clyde to diffuse the bomb just in time before the water from the leak made contact with the bomb's barrier.

Once the bomb is diffused and the situation is alleviated, Matt and the rest of the crew rest in their Living Room, with Hiroshi making tea and offering a cup to the captain. Matt declines and claims to go to his room to take a nap after the ordeal. Soon after his departure from the room, Hiroshi receives a transmission from the mysterious bomber claiming that they are now aboard the Dillinger. SpoilerThe scene then transitions to Matt being on the other end of a transmission with Hiroshi from within the ship, revealing him to be the Mysterious Bomber this whole time.