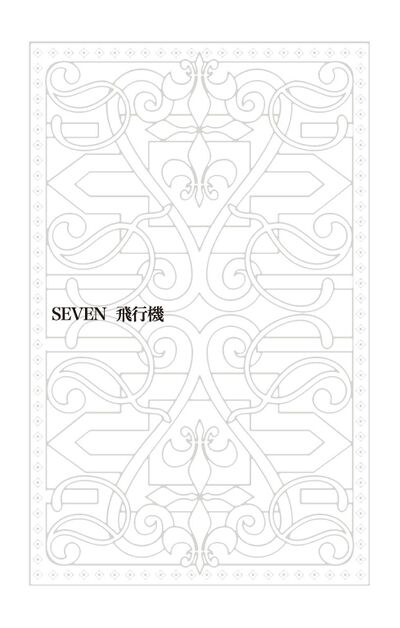 SEVEN: Airplanes (SEVEN・飛行機, Sebun Hikōki) is the seventh chapter of JORGE JOESTAR, a light novel based on the JoJo's Bizarre Adventure series.

George moves to England with Erina and Penelope de la Rosa. He claims that the English people are unpleasant and naturally look down on everyone else while pretending to be gentlemen, believing that the Spaniards back on the Canary Islands were far better despite them being cocky and violent. Their neighbors would snidely remark about Erina, being surprised that she survived and finally returned home, but never actually lived in the Joestar manor before. They make rumors about Erina and Speedwagon because he's a bachelor and helped Erina rebuild the mansion after it burned down. They state that it's been too long since Erina's wedding for her to reenter society, and her son doesn't really fit in with the others. Then they started asking Erina to describe her life on the Canary Islands. Having enough of her neighbors, Erina starts commuting to London instead of staying home. Her father, Graham Pendleton, had a hospital in the city but he had retired and the hospital is now run by someone else. However, Erina and Graham owns the controlling interest in the stock. Erina and her father stayed in contact the entire time she was on the Canary Islands.

Erina starts her own company not far from the hospital, transferring her headquarters of the Star Mark Trading Company that she founded in the Canary Islands to London. The original office remains, and additional ships from England increases the volume that her company could trade. Her company purchases goods in Spain to sell in England, steadily increasing her profits. Penelope and Erina are both happy working at their company, but George had transferred to Jonathan's old school, Hugh Hudson High, and is being bullied. George's classmates are amused about him being a fallen aristocrat, and are also jealous about his mother's economic success. George usually ignores them until someone insults his mother, leading to a fist fight. George eventually refuses to engage with his bullies any more, whereas Penelope is furious and starts summoning locked room clowns on his bullies. George reminisces about his time with Tsukumojuku and wishes to make another friend.

George usually wanders to steep cliffs along the coast to watch the sea, since it's where no one he knows would bother him. One day, he meets the Motorize siblings there. He notices them carrying a large object with huge wings, resembling a bird, by the cliff's edge. The girl went inside it, and then her brother suddenly pushed the object off the cliff along with his sister. George quickly jumped off the cliff trying to save her, only to see that the 'bird' just rose above him with the girl still inside it. Both George and the girl are shocked to see each other, and George curses his impulsiveness, bracing himself for his impact with the water. Suddenly, George is grabbed by the boy from the top of the cliff and they fly along the surface of the ocean. George sees that the boy has wings on his back, covered in blood. The boy asks if George is hurt but wonders what he was thinking since he should have seen the glider. The girl laughs hysterically saying that George almost gave her a heart attack, and then blows a kiss at him since George was worried about her. George watches the girl fly in her glider and becomes jealous, wanting his own. The boy tells George that everyone will be flying one soon enough and explains the science behind the gliders. George apologizes after noticing that the boy's wings must have been painful, realizing that it is similar to Penelope's Wound ability. George learns that the boy's name is Steven and his sister is named Kenton.

Steven and Kenton give George a ride back to their house in their wagon. George finally introduces himself to them and they're surprised to learn that he's a Joestar. Their grandfather was a friend of George's grandfather, George Joestar I. Kenton asks if George knows a girl named Darlington but George declines, learning that Darlington is actually in his class and is their little sister. Their dad named Kenton and Darlington after the last names of his old friends. Darlington greets George once he arrives at their manor's shed and brings tea to her siblings. She sulks when George claims that he doesn't remember her in his class, but quickly asks their butler Faraday to bring tea to George as well. She notices Steven's wings and gets angry with George because it takes three weeks for his back to become normal again. Kenton teases Darlington for having a crush on George and then Faraday later serves them tea, which George thought was delicious. Steven asks George if he wants to hang out with them and build planes after school if he's interested, causing George to become extremely excited about the opportunity.

George plans to retrieve a sunken glider at the bottom of the cliff so he can make it his own and rebuild it. Since Steven had his wings out, he does most of the work getting the glider up while George loads its pieces into their wagon. They unload the pieces at the Joestar mansion, and Steven offers to help but George is intent on learning how to build it himself. In school, George starts talking about novels with Darlington. Kenton later tells George that Darlington keeps borrowing books from their dad's library as an excuse to keep talking with him. However, George's reply leads Kenton to believe that George is already in love with someone else. Kenton teases him while George is embarrassed and internally struggles with the thought of being in love with Lisa Lisa. That night, George finishes putting together his glider but notices the top right wing looked as if it had claw marks. Kenton had thought she hit a seabird when she crashed that glider in the past, but George wonders if it was actually something else. George heads to the Motorize manor the next day when Darlington suddenly asks if he's in love with anybody. She claims that she's in love with William Cardinal, a boy two years older than them who is smart and will be a doctor someday. Darlington then states that Cardinal thinks that George is odd because of his opinion on a novel. George tells Darlington to use her own words if she wants to criticize him rather than saying what Cardinal thinks about him. Darlington apologizes but says he can leave their house then, and George agrees. As he is about to leave, Faraday tells George that a friend of his was just there searching for him. He was a young boy who looked like he was in middle school and spoke Spanish at first. Faraday brings George to another room.

George is astonished to see Tsukumojuku standing there. Tsukumojuku explains there was some meaning for him to arrive there, and either George desired to see him again or something needed Tsukumojuku to be there for George's benefit. George notices that Tsukumojuku is actually floating. Tsukumojuku says that he is not actually there, but is currently in Japan, in the year 2012, with another detective named Jorge Joestar. George's Beyond was making this miracle happen. Tsukumojuku grabs George's hand before saying that they'll meet again once more, and then George is suddenly teleported to a dark area, holding a girl's hand instead. George had somehow reunited with Lisa Lisa. They were in an underground temple in Rome where nobody had set foot in for over a thousand years, as Lisa Lisa was trying to retrieve the Red Stone of Aja with Straizo and the other Ripple warriors. However, Lisa Lisa got separated from them. Lisa Lisa and George talk about George's new life in England and she hopes he isn't being bullied again. After talking about airplanes and how much fun George was having, Lisa Lisa went quiet. Suddenly, they hear a strange noise behind them like a monstrous creature moving against the ground. George realizes that Tsukumojuku brought George there because Lisa Lisa needed him, as she was afraid. George describes the creature as a Gorilla Spider, as if twenty gorillas were fused into one. George realizes that the monster was formed from Lisa Lisa's emotions and tries to calm her down. She wonders if George is actually real or if she is just imagining him as well and then kisses him, but accidentally uses the Ripple on her lips. George is shocked but is relieved that the gorilla spider had gone away. In the darkness, Lisa Lisa feels the terrain with her Ripple and helps George walk through the temple. The two laugh at each other and kiss again. Eventually, they find a torch in a giant treasure chamber, filled with massive jewels, armor, and weapons. Lisa Lisa finds the Aja affixed to a pendant and has George put it around her neck. She tells George to promise not to tell anyone that she has it, as she has to protect the stone with her life. She hides the pendant inside her clothes and they leave. Finally, the couple exits the temple and reunite with Straizo. Straizo and the others are all shocked to see George. Lisa Lisa lies to them about being unable to find the Aja.

They all head back to the secret base of the Ripple warriors, where George calls home. Penelope answers and tells him that Kenton is dead. George's airplane was at the scene and Kenton had told Steven that George invited her to the cliff beforehand. Shocked, George wonders if it was an accident. However, Erina fights back her tears to explain that Kenton was found with several stab wounds from a knife that bore the Joestar crest, and asks if George could explain what happened to the police and Steven.