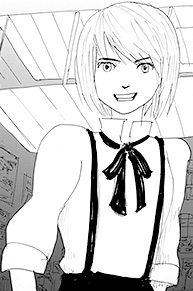 Ken (Nickname from her siblings)

Miss Kenton (The Remains of the Day)

Kenton is a friend of George Joestar (Universe O), who she meets in England while flying on her glider one day. She is the daughter of Ben and Harriet Motorize, younger sister of Steven, and older sister of Darlington.

Kenton is a young girl with a cheerful face, considered attractive by her classmates.[4] She has short hair kept up to her neck and long bangs covering her forehead. Kenton wears a collared shirt with sleeves folded to her elbows along with a bow-tie and overalls.

“
The girl who got me to dream. Like a fairy riding on the back of a bird. Always smiling, prone to startling me with her sharp tongue, but she never once lied or hid her feelings. She was fun to be around.
”
—George Joestar, JORGE JOESTAR Chapter 9: Cliff

Kenton has a cheery disposition and speaks openly to George and her family. She is knowledgeable in aircraft and taught George everything he knew about planes.[4] She also enjoys teasing George about women and pokes fun at Darlington's crush on George.[2]

George describes Kenton as being a little odd, never really talking to anybody else, and even though she is attractive and well-known the boys in her class had given up on asking her out. Kenton desires freedom and stated in school that her future plans is to get a job, despite her family's noble title. However, she feels trapped in her home as her father would never allow her to leave for a job. After her mother dies, Kenton becomes suicidal and uses her passion for making gliders as a way to jump off cliffs over and over until she would die one day. Darlington mentions that Kenton was angry all the time. Despite being aware of Steven suffering by having to grow wings out of his back to save her each time, Kenton would continue to jump off cliffs. Both of them would take their stress out on each other.[4]

Kenton is protective of George and feels angry when Antonio Torres insults him to her. Although Antonio appeared like a monster and tells Kenton that she is going to die before vanishing, Kenton does not feel afraid. Instead, she feels more worried about George.[4]

Kenton was born in 1888 as the second child of Ben and Harriet. After her mother committed suicide, Kenton eventually tries killing herself as well but is saved by Steven each time. Her and Steven would go into a repeated process of taking their stress out on each other.[4]

They soon became interested in creating gliders and studied wing warping controls. They named each glider they constructed "Motorizing" with a number attached to it and tested them on the cliffs. Kenton begins seeing a monster while gliding and tells Steven about it. He would appear whenever she flew in the dark or when it was raining and then do things to her plane. It would tear up the cloth on Kenton's glider, make screws or nuts on the wings become loose, or sometimes even scratch her body while she was flying. They didn't take it too seriously since they were used to weird things happening like Steven's ability to grow wings out of his back.[3] Motorizing 5 sank in the water after getting attacked by the monster, although Kenton assumed that it was a seabird. Motorizing 6 was destroyed by a sudden gust of wind which smashed it against the cliff.[2]

One day, Kenton goes inside their Motorizing 7 glider while Steven pushes her off the cliff. A bystander who witnesses the incident, George Joestar, quickly jumps off the cliff trying to save her, only to see that she just rose above him. Steven saves George with his wings and the siblings give him a ride back to their house in their wagon. George finally introduces himself to them and they're surprised to learn that he's a Joestar. Their grandfather was a friend of George's grandfather, George Joestar I. Kenton asks if George knows a girl named Darlington but George declines, learning that Darlington is actually in his class and is their little sister. After Darlington greets George, Kenton makes fun of her for having a crush on him.

Weeks pass and Steven, Kenton, and George continue discussing airplanes and building in their work shed. Kenton tells George that Darlington keeps borrowing books from their dad's library as an excuse to keep talking with him. They tease George about having someone he loves already since he didn't show any interest in their sister, and Steven points out how George already lives with someone really pretty.[2] 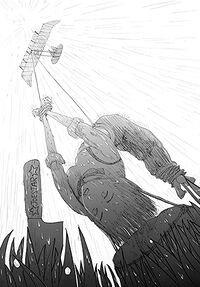 Later that day, Kenton hears the monster she kept seeing say "Horhe Joestar". She didn't know much Spanish but could tell the monster was insulting George and couldn't stand for it. After she yelled at the monster, it threatened to kill her. She plans to tell George the next time she sees him but the monster possesses someone's body and tells Kenton that George is waiting for her at the cliffs.[3]

Kenton leaves school around 3:30 PM and arrives at the cliffs about thirty minutes later. There, she is brutally murdered by being stabbed twenty-three times in the face and body with a knife bearing the Joestar crest. Her body is then tied to George's glider named Star Shooter and tethered to a rock, so that George would be accused of murdering her. Steven sees Star Shooter in the sky as if it was a kite and runs to the cliffs with his horse, where he discovers Kenton's body and sees a glimpse of the killer.[4]

As the prime suspect for Kenton's murder, George is arrested when he arrives back home despite having an alibi and no motive. Her father, Ben, desperately tries to force the crime onto George. George thinks about Kenton each night and cries in his cell.[4]

Steven tries finding evidence of Kenton's real murderer to prove that George is innocent. However, Steven becomes a suspect himself in 1908. In the same year, George is cleared of all suspicion. Her murder case eventually becomes impossible to prosecute further after Steven flees to France, leading Ben to quit the family business. Steven and Ben become desperate and research methods from various religions and countries on how to bring Kenton back to life. They eventually meet Lisa Lisa and the Ripple warriors, who changes their minds when they are shown what a real zombie is like. After everything they learned, George, Steven, and Lisa Lisa conclude that Antonio Torres murdered Kenton.[3]

Kenton as a zombie

George heads inside the Motorize manor when Steven is mysteriously absent from his wedding. Horrified, he sees Kenton in pajamas with her head covered in blood. She was turned into a zombie by Antonio and lunges toward George. George has no choice but to stab a fireplace poker through her head and says goodbye to his old friend.[5]