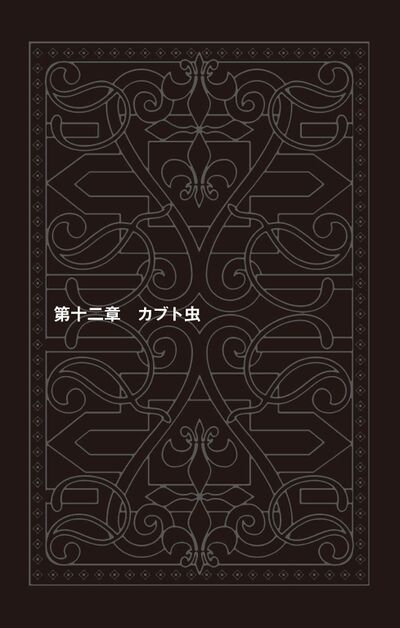 Chapter 12: Rhinoceros Beetle (第十二章・カブト虫, Daijūnishō Kabutomushi) is the twelfth chapter of JORGE JOESTAR, a light novel based on the JoJo's Bizarre Adventure series.

Kars is disappointed to learn that Jorge's adoptive grandfather, Joseph Joestar, died from cancer two years ago. Kars confesses that he's always dreamed of placing a Stone Mask on Joseph, turning him into a vampire, having him eat other humans, and then finally eating him himself. He explains the function of the Stone Mask and states that tweaking the brains of humans can make them do almost anything. After mocking Jorge for being short compared to Joseph, Kars demonstrates his earlier statement by slipping his fingers into Jorge's brain, causing Jorge's body to contort until he grows twenty centimeters taller. Kars affirms that humans are fascinating and he enjoys their imaginations and creativity. In contrast, his own race lacked ambition, living a life of stagnation. Kars ended up researching, created the Stone Mask, annihilated his own race, and conquered the sun. Jorge wonders how he could deal with an immortal life form like Kars, knowing he can't let a predator like him arrive at Earth.

Just then, Jorge hears a sonar ping from inside his body and realizes that Narancia has put U-Boat inside him. Narancia had also put one submarine inside Kars. However, Kars feels something inside himself and pulls it out. He analyzes it by dismantling the whole submarine and examining the individual parts. Noticing the computers in the control room of the submarine had some sort of visual data, Kars plugs the computer's cord into the palm of his hand and opens his mouth. A beam of light shines from his mouth and projects the information from his palm onto the wall across from him. Every image that displays on the wall are naked images of Trish Cicciolina from Narancia's memories. Trish Cicciolina was an adult entertainer who later became a member of the Italian Parliament, and she is even famous in Japan. Narancia embarrassingly begs Kars to stop displaying them. Kars asks if human bodies are now capable of making machines, but Narancia goes berserk from his embarrassment and Jorge worries that Kars will kill him. Thus, Jorge answers Kars by saying that it's not a machine, but a Stand. He explains what Stands are and Kars wonders whether he could use one too since he can see and touch them. Jorge assumes it's because Kars is the Ultimate Thing. Kars puts his hand to his chest and a submarine with a different design from Narancia's U-Boat surfaces from within him. Both Jorge and Narancia are speechless at Kars's spontaneous development of a Stand, realizing the hopeless situation they're in now.

Experimenting with his new Stand, Kars generates an extremely loud sonar sound from within Jorge and Pucci's bodies. Kars discovers that Pucci has a Stand as well and drags Whitesnake out of Pucci's back. Pucci has Whitesnake punch Kars, but rather than one or two DISCs emerging, a whole flood of DISCs spill out of Kars's head. Understanding how Whitesnake works, Kars develops his own version, Whitesnake Ultimate. Kars's version has three heads and six arms like a statue of an Asura. Whitesnake Ultimate pulls out Pucci's Stand and memory DISCs. As Kars wonders how Pucci got his Stand, he reveals that he made a Bow and Arrow long ago which in theory could develop special abilities in people, but he had barely used it. He then watches Pucci's memories and sees that the priest got his Stand from the Devil's Palm, a holy spot in America that moves itself from place to place and those that wander into it would either unleash their Stand or die. Kars is disappointed at how dull human memories are and slams the DISC back into Pucci's head. However, he reveals that thanks to Pucci's memories, their six month trip back to Earth will only take four hours. Kars projects an image from Pucci's memories showing a vampire in the sky at the time Pucci's house was destroyed. Kars wasn't the one who threw the metal plate that killed Pucci's family, but instead this vampire did. Wondering what this vampire is plotting, Kars also checks through Jorge's memories. Jorge asks Kars if Kars could heal his body, impressing Kars that the boy could still think and talk despite his memory DISC being taken.

As Kars heals Jorge and restores his original height, Jorge asks him if he could return his DISC as well, but Kars insists on keeping it after seeing a photo of the vampire, Dio Brando, in Jorge's memories. Kars projects Jorge's memories on the wall, including a photo of a middle-aged George Joestar and a childhood memory of Joseph narrating Jonathan's attempt to stop Dio from robbing a train. He deduces that the George from the photo could not be the same one from Tsukumojuku's world, rather another George Joestar from the previous universes. Kars also mentions that vampires do not have wings, and that, in Pucci's memory, Dio Brando floating in the sky could have been a caused by a Stand power.

Jorge calls Giorno, who informs him that there is an expected bombing on Nero Nero Island and Morioh after an American scout plane had crashed on Morioh, resulting with the residents clashing with the Navy. Meanwhile, reports have been going around that terrorists had invaded the islands to easily spread a weaponized virus that causes people to become berserk around the world. After Jorge hands the phone to Narancia, he approaches Kars and asks him if he could borrow Kars's Stand powers. Unable to handle the power, Jorge's body bloodily explodes after shoving the DISCs into his head, though Kars reassembles his flesh again immediately after. After a brief banter, Kars prepares a powered-down copy of his U-Boat for Jorge to use, and the group heads back to Earth.

At Earth's orbit, Pucci informs the deaths of Funnier, Sandman, and Pocoloco to the communications officer over the radio. While Kars expresses at how vast the Earth's oceans are, Jorge calls Giorno to commence their attack on the islands and disable the military weaponries. After Narancia and Jorge send waves of missiles to the ships, the spaceship descends to Earth. At the same time, Bucciarati calls Jorge to tell him that the bodies of Yoshikage Kira and Diavolo have been found, and as Pucci stares at the islands and Arrow Cross House out the window, he points out the "rhinoceros beetles" and the "Via Dolorosa", two of the fourteen words carved on the Giotto plate.

The impact of the spaceship's landing shakes Nero Nero Island off of Morioh as the latter also flips upside down. Suddenly, an island nine hundred times larger than Morioh rises from underneath, to which Jorge recognizes as the mythical country of England. As he remembers his first arrival to Morioh, Jorge realizes that the reason why the map of Morioh felt familiar to him at the time was because he was subconsciously recalling Tsukumojuku's map of England, only it had been drawn backwards.

(Photo only)
George Joestar I