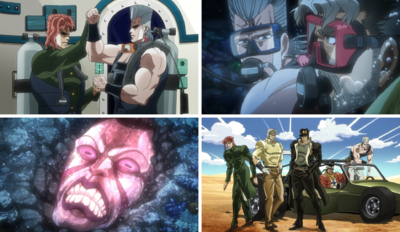 High Priestess is destroying the Joestar Group's submarine and the heroes must evacuate with scuba diving equipment. However, High Pristess's unseen user, Midler, shows the heroes are not safe even in the water.

The Joestar group puts on their scuba diving equipment

The Joestar Group must now evacuate their submarine which is under attack from High Priestess. They are thus forced to put on some scuba diving equipment to swim to the surface and Joseph gives a quick lesson as the group prepares to exit the submarine, precising notably they they'll have to follow the sea floor.

However, when they begin to dive, they discover High Priestess has already caught on to them by disguising itself as Polnareff's regulator and has entered his mouth. Thankfully, Joseph and Kakyoin narrowly manage to drag the Stand out with Hermit Purple and Hierophant Green. The fight continues as High Priestess turns into a harpoon but the group nonetheless manages to seal it inside the submarine. As planned, the group follows the sea bed up to the surface and only have to watch for moving rocks. However, they come across a strange rock formation, which is High Priestess disguising itself as a giant face of rock. The enemy Stand subsequently sucks them inside its mouth.

The High Priestess disguises itself as the sea bed

The Joestar Group is now trapped in High Priestess' mouth. As the Stand's user, Midler, gloats from the surface, the group tries to play to Midler's femininity and flatter her but this only serves to anger her further. Midler thus tries to crush Jotaro between High Priestess' teeth. However, Jotaro manages to break the teeth with Star Platinum and they all break free from High Priestess' mouth, escaping to the surface, where Midler is incapacitated (and disfigured) as a result of Jotaro's attack. 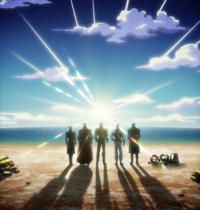 The Joestar group has finally arrived in Egypt

Having finally arrived in Egypt. The group take a moment to observe the rising sun and contemplate all the battles they have pulled through and all the countries they have visited, but shortly continue their journey. Meanwhile, DIO makes his own move and has summoned several new Stand Users. The next day, Jotaro and Joseph assure Suzi Q of their safety before joining the others in their pursuit of DIO, a battle against the supernatural that the Joestar Family has carried out for a century but which they always had done with allies along the way.

Jotaro is now in Egypt, a crossroad of ancient and new civilizations and one of the most exotic lands in the world. Meanwhile, a Speedwagon Foundation helicopter is seen carrying an unusual passenger.

“
The scenes in diving gear take up more than half of this episode, but these devices are really difficult to draw. Jotaro and Avdol were particularly tricky because of the accessories they already wear normally. We didn't know what was where anymore. The only silver lining: their obstructed mouths do not require lips synchronization.

This is a new underwater episode after the 6th against Dark Blue Moon. Although the aquatic environment had given us a lot of problems again, it was a pleasure to make the sign language scene between Kakyoin and Ponareff. I love seeing them in sync like this, they are really well tuned.

Since this is the last fight, we had wished to make everyone participate. Every character is given his little action scene. The scene where High Priestess attacks by transforming into a harpoon was drawn by Katayama, the action scene animation director, up to the key drawings, for a beautiful result.

There's the scene where High Priestess becomes red - seen from the inside of the mouth and not the cheeks - we went from a pink as a reaction to the flattery to an angry red. I hope that this effect will have its little impact.

When the group finally steps on Egyptian soil, they stand on the beach, facing the sea. There is a shot on the water surface, rather discrete, but it was the only way which asked the most work because of the transparence effect.

The scene where Jotaro tosses a starfish stuck on him wasn't in the original storyboard, but we added it in the process of animation. It was an idea of the director Mr. Kato. It's maybe at this moment that Jotaro takes an interest in underwater fauna, to then dedicate his life to research and even a Ph.d. At least you can picture it like this! (laughs)

The last scenes are all original. The review of the enemy Stands until then, Dio in his mansion, a phone call to Suzie Q... Everything here allows us to wrap up the journey and really give a last episode feel.
”
—Naokatsu Tsuda, Blu-Ray limited edition commentaries