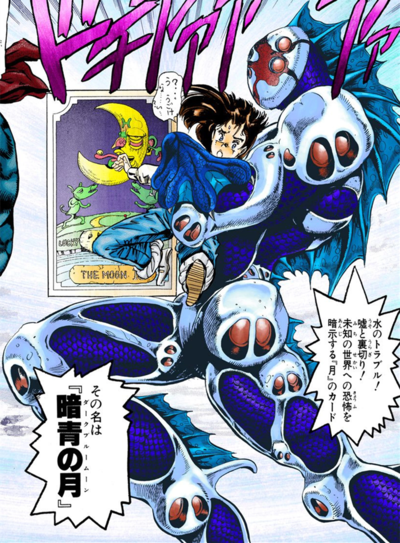 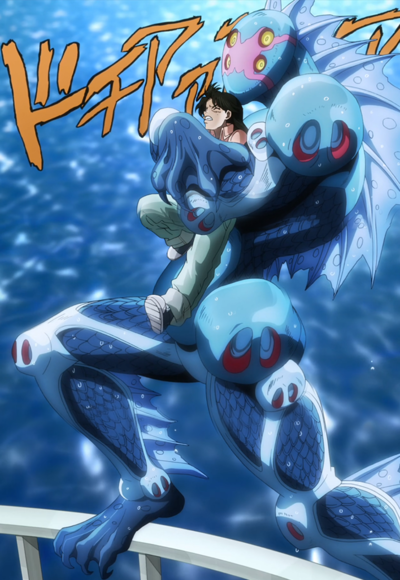 Dark Blue Moon is a powerful humanoid Stand with many fish-like features whose capabilities are maximized when underwater. Its abilities range from attaching power-draining barnacles to creating whirlpools. 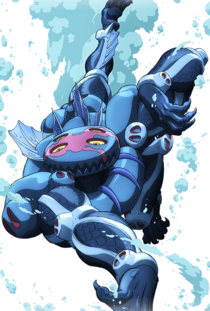 Dark Blue Moon is a humanoid Stand with aquatic features. It manifests itself as some sort of merfolk-like entity with a flat head, four eyes, a large dorsal fin lining most of its back, additional fins on its legs, and webbed hands and feet. Its form was made while thinking of a combination of vital strength and mineral material.[1]

Dark Blue Moon is a marine Stand, and, as such, its skills are more effective in an aquatic environment.[2]

By itself, Dark Blue Moon is a powerful Stand whose physical abilities are greater than average. For starters, Dark Blue Moon's claws are strong and sharp enough to destroy a still-running propeller and slice a shark in two with ease.[3][4] Moreover, it can create strong whirlpools by simply spinning its webbed hands or feet fast enough.[3] Its user has stated that it swims faster than any fish in the sea.[2] Finally, Dark Blue Moon has a high enough range that it was able to attack Jotaro without the user even being in the water.

Its User, the Impostor Captain Tennille, also has an incredible lung capacity, being able to hold his breath for up to a personal record of six minutes and twelve seconds. This indirectly advantages Dark Blue Moon as the User and its Stand can consequently perform prolonged fights underwater.

The barnacles drain the target of its strength and also allow Dark Blue Moon slight control over the infected body parts, allowing it to drag its foes back into the water if they try to escape.[3]

Dark Blue Moon can also use its scales as projectiles, throwing them against the enemy.[3] By combining them with its ability to create whirlpools, it can create a dangerous hail of razor-sharp scales that damages those trapped in the water but also prevents outsiders from diving in and interfere.