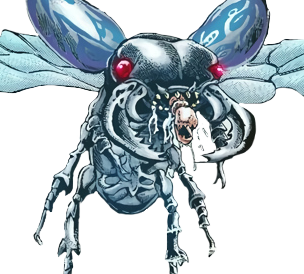 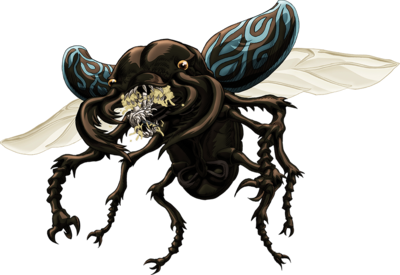 Destructive Power
E
Speed
A
Range
A
Stamina
C
Precision
E
Developmental Potential
E
A
B
C
D
E
A: Very Good
B: Good
C: Average
D: Poor
E: Very Poor
“
You could be one inch away, pointing at me with ten guns... The ten bullets wouldn't even touch my Stand!
”
—Gray Fly about Tower of Gray's speed, Chapter 123

Tower of Gray (タワー・オブ・グレー（灰の塔）, Tawā Obu Gurē) is the Stand of Gray Fly featured in the third part of the JoJo's Bizarre Adventure series, Stardust Crusaders. Specializing in making attacks look like accidents, it takes the form of a giant stag beetle with an extending second jaw and the ability to move at incredibly fast speeds.

Tower of Gray appears as a large, dark stag beetle about the size of one's hand with intricate patterns on its shell. A hidden, toothed, secondary jaw can spring out from its mouth.[1] Despite having the general form of a beetle, it also possesses teeth in its mouth.[2]

It represents the tarot card The Tower, which symbolizes the interruption of a journey by something unexpected and chaos.[2]

Perhaps one of its greatest traits is its amazing speed; Tower of Gray is able to easily outmaneuver very fast Stands, such as Star Platinum and even Hierophant Green's Emerald Splash at close range. Its speed is so incredible that, according to Gray Fly, Tower of Gray could have several guns shooting at it at the same time in point-blank range and it would still escape unscathed. Tower of Gray has great flight control, as it's able to write words in cursive while flying and can navigate its way through Hierophant Green's Emerald Splash multiple times unharmed. However, it cannot dodge something it doesn't see coming and is vulnerable to sneak attacks.[2]

Tower of Gray's defining feature is its long, extendable stinger, which protrudes from its mouth. It has enough force to tear flesh apart or pierce its way right through. Combined with its great speed, Tower of Gray is capable of killing multiple people in a very short amount of time and even go through the head of a person with ease.[1]