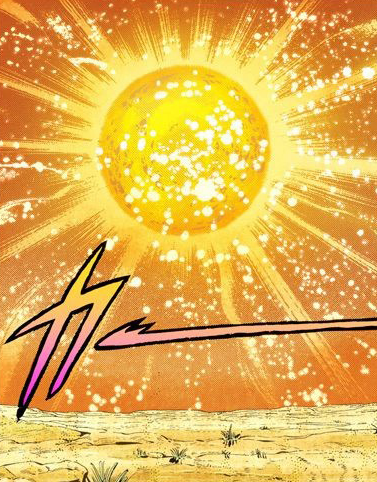 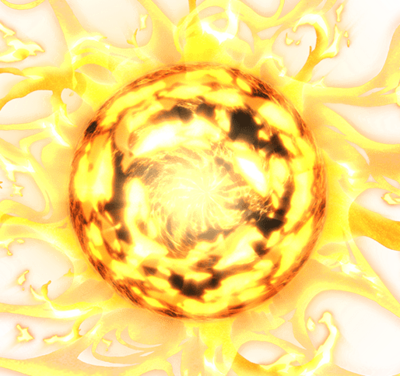 Sun (サン（太陽）, San) is the Stand of Arabia Fats, featured in the third part of the JoJo's Bizarre Adventure series, Stardust Crusaders. As it names suggest, Sun takes on the appearance of a small sun that radiates scorching heat and can shoot concentrated beams at its victims. 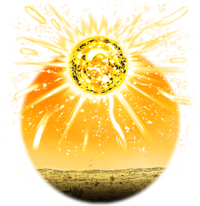 Sun appears as a fiery sphere imitating the sun,[1] though believed to be much smaller. It continuously hovers at around 100 meters from the ground.[2]

It represents the tarot card The Sun, which symbolizes abundance, happiness, and fun.

Sun is an amazingly powerful Stand with a large range of action. However, it doesn't do anything to protect its user,[1] who must stay nearby and hide himself.

Sun's foremost power is to emit light and heat at lethal levels over a large area.[3]

Not only does Sun shine bright enough to give the impression of being in the middle of a bright day despite the time showing that it's nighttime,[3] it also raises the surrounding temperatures up to 80 °C (176 °F).[2] Moreover, it can maintain that level of power over a long period, as Arabia Fats was willing to stalk the Joestar group and let them die from the heat of Sun.[2]

On the other hand, Arabia must also take precaution to not be affected by his own Stand.[2]

Sun can bombard enemies with an onslaught of light rays

In addition to its radiating of heat, Sun is also able to shoot "light ray energy" from its photosphere[1] capable of inflicting significant damage.[2]

When threatened, it will shoot rays in all directions but can also strike with precision, destroying a pair of binoculars in Joseph Joestar's hands.[2] They can pierce through flesh, but Silver Chariot's sword is able to deflect them.