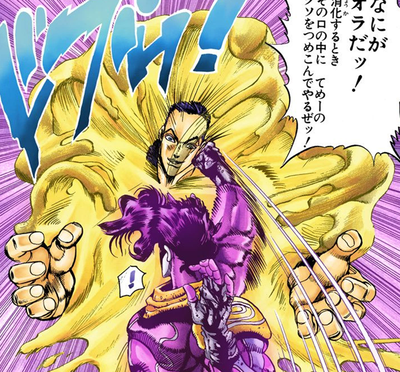 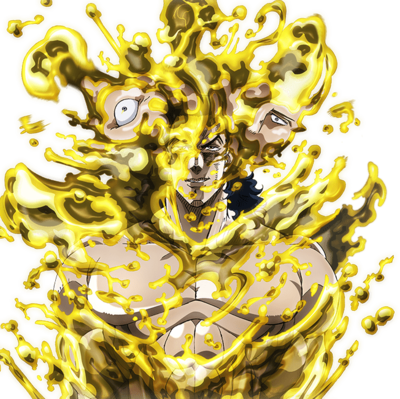 Yellow Temperance is a blob-like Stand that consumes flesh to grow in size. It can wrap itself around its User in order to provide either a disguise or an impenetrable defense. 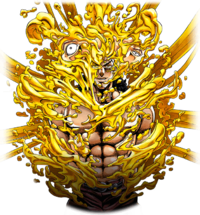 Yellow Temperance's base is an amorphous, yellow substance, with zero facial features. However, it takes on the characteristics of anyone it transforms into.

As a Materialized, Yellow Temperance can be seen by non-Stand Users as a result of being directly bound to flesh wrapped around its User's body.

“
My Stand is the perfect defense and offense! It's a wall of armor that absorbs all impact and fights back at the same time!
”
—Rubber Soul, Chapter 138

Yellow Temperance's blob-like nature and ability to absorb organic matter from physical contact result in one of the few Stands of the series that can be said to be physically invincible.

On the other side, Yellow Temperance is limited by its own user's human vulnerabilities, to the point it can be said that its one weak point is Rubber Soul.

Yellow Temperance is a flesh-consuming blob

Yellow Temperance's primary power is the ability to assimilate organic matter, using it to grow stronger and larger. Thus, its user constantly seeks things to consume even when hidden.[1] It also makes it visible to ordinary people. When deposited as just a small part on someone else, Yellow Temperance begins to cover their entire body, spreading to wherever it has touched until it completely assimilates the victim, killing them.[2]

Yellow Temperance is able to alter Rubber Soul's physical appearance.[2] This ability has been shown to mimic other Stands as well, when what seemed to be a part of Yellow Temperance detached itself from Rubber Soul under his Noriaki Kakyoin disguise and formed into Hierophant Green.[2]

Yellow Temperance, because of its blob-like nature, has the capacity to absorb obscene amounts of physical punishment and impacts, acting as an armor for Rubber Soul.[3] It can resist impacts, burning, and freezing. It also seems to protect its user underneath from any damage as well. It cannot, however, make up for human frailties, such as the need for oxygen.[3] For all intents and purposes, Yellow Temperance is invincible as long as Rubber Soul is still alive to use it.

Hirohiko Araki mentions that several enemy Stands, such as Yellow Temperance, were inspired by various horror movie items. For Yellow Temperance's case, it was a slime, likely referring to the 1958 film The Blob, which is about an amoeboid alien life form from outer space that grows larger and larger the more it consumes.[4]