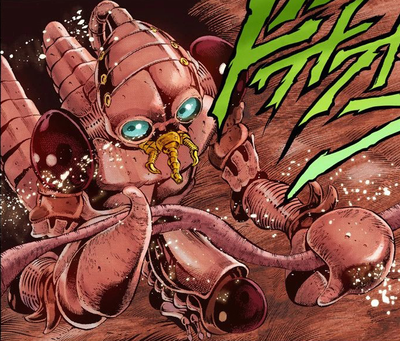 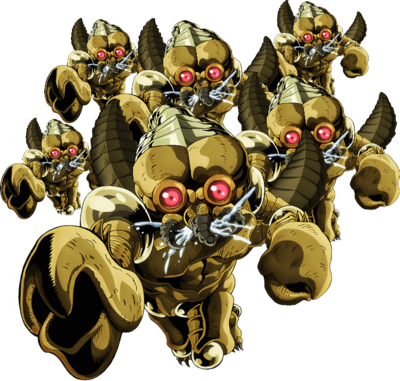 It is a minuscule humanoid Stand with insectoid features. It can infiltrate the brain of a designated target and manipulate their pain receptors. Any damage that Steely Dan receives will be doubled in the victim.

Lovers' most siginificant trait is its microscopic size, enabling it to infilitrate Steely Dan's targets without notice. The Stand is a humanoid with insect and arachnid features. It has a segmented body, pincers and a large insectoid head with big round eyes. This design was based off a combination of a fly, a flea and the robot, Johnny 5 from the 1986 science fiction film Short Circuit.[1]

Lovers is able to disguise itself using mashed brain cells.

It represents the tarot card The Lovers, which symbolizes the forming of a bond between people.

Lovers possesses a very crude, juvenile personality and obeys its user, Steely Dan. It repeatedly taunts Kakyoin Noriaki and Jean Pierre Polnareff with boasting about its ability to defeat their stands,[2] by asserting that despite being a weak stand, it overcomes that weakness by mastering its strengths. Lovers will screech "KREEEEE!" on occasion and enjoys belittling its enemies. Lovers can be quite clever, as it nearly defeated Kakyoin and Polnareff by multiplying itself within Joseph's brain to distract them from finding the real one. The Stand is as cowardly as its user though, and will flee when pushed into a corner.[3]

By Steely Dan's own words, Lovers is very weak, unable to even lift a single strand of hair.[4] Because of its microscopic size, Lovers is by itself very vulnerable. However, its ability to infiltrate the brain makes it nonetheless a formidable and elusive Stand that is very difficult to reach and its reach of hundreds of kilometers makes escape impossible.[4]

Lovers' primary ability is to enter the brain of its victim, more precisely the brain stem,[5] and manipulate their pain receptors.[6] When Steely Dan feels any physical stimuli, be it the pain from a punch,[6] or even the sensation of cracking his fingers,[4] Lovers will go berserk inside the brain and return the pain several folds to its victim, causing them to be in agony. It can even cause phantom pain in absent limbs.[4] It is used to take Joseph Joestar hostage.

Lovers can take brain cells and turn them into mash for various uses. First, it can disguise itself as another Stand using the mash to cover itself[5] but can also create a myriad of dummies that aren't the real Stand but can still harm a Stand that has been shrunk to its size.[5]

Although not inherent to itself, Lovers uses DIO's spores to kill its victims. Thanks to its size, it can carry an individual spore inside someone's brain[4] and then feed it with brain cells in order to make it grow and eventually destroy the brain like it did with Enya's.[7]