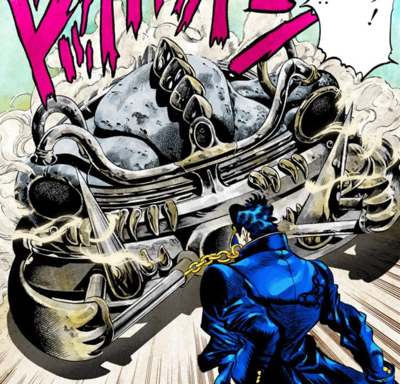 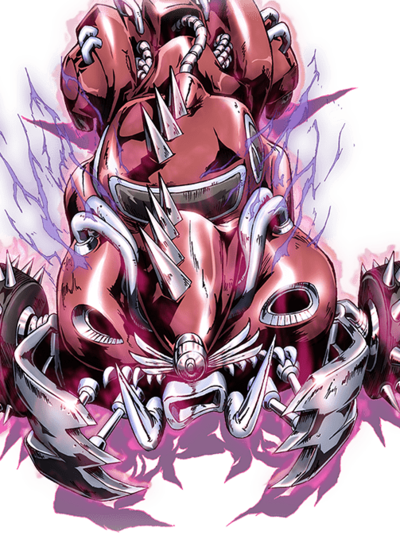 Destructive Power
B
Speed
D
Range
D
Stamina
A
Precision
E
Developmental Potential
D
A
B
C
D
E
A: Very Good
B: Good
C: Average
D: Poor
E: Very Poor
“
This car, is there anything it can't do?!
”
—Polnareff about Wheel of Fortune, Chapter 153: Wheel of Fortune, Part 4

Wheel of Fortune (ホウィール・オブ・フォーチュン（運命の車輪）, Howīru Obu Fōchun) is the Stand of ZZ, featured in the third part of the JoJo's Bizarre Adventure series, Stardust Crusaders. As a Stand bound to a car, it is capable of morphing its exterior to suit the needs of its driver. 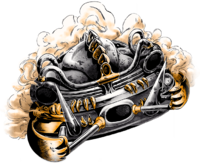 Wheel of Fortune is first seen disguised as a plain car. Its design is based on American cars from the 1960s to 1970s.[1] It resembles a 1952 Hudson Hornet.

Once Wheel of Fortune's true power is revealed, it takes on a monstrous form. Spikes and tubes protrude across the hood, roof, and trunk. The headlights grow and are raised to resemble eyes, and the front bumper splits and becomes covered in spikes to resemble the mouth of a beast. The wheels can rotate to fit into tight spaces and even grow spikes to climb walls.[2]

Both the monstrous and regular forms of Wheel of Fortune are created by its transformation ability. The true form of ZZ's car is that of a small car resembling a Jeep Wrangler without a roof.

It represents the tarot card Wheel of Fortune, which symbolizes change and unpredictability.[3]

The series is known for alternating colors between media, the information presented below may or may not be canon.
Car(Gray and khaki)
Car(Green and yellow)
Lights(Red)
Car(Red and silver)

The car can morph and adapt to any situation

Although initially seeming to be just an abnormally powerful car, Wheel of Fortune is truly a powerful, versatile Stand able to transform and adapt as the user sees fit to defeat his enemies.

The Stand's primary ability dramatically enhances a vehicle's appearance and capabilities, "allowing even a common dilapidated car to transform into a more powerful car with (nigh-permanent) four-wheel drive."[4] The car is also able to repair itself, distort its hull to squeeze inside a crevice, orientate its wheels horizontally to drive between walls, create spikes on the wheels to scale a cliff, and even separate its internal wiring to create dangerous sparks.[2]

The transformation is disabled when ZZ is filled with fear and loses his confidence.[2]

Gasoline bullets being fired at Jotaro

Wheel of Fortune can shoot its own gasoline at its opponents as a high pressure scatter shot. The gasoline is fired with enough force to damage a human body, but its primary purpose is to make its targets highly flammable, allowing ZZ to set them ablaze with sparks from his car's cables.[2]

ZZ can hijack nearby cars' radios in order to converse with people.[5]