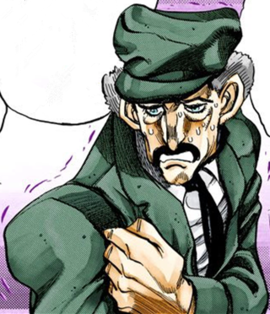 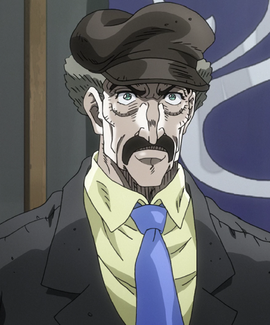 SC Episode 23
“
I've been working for the Joestar family for 30 years. I've known Lady Holy since she was in elementary school. I know I have to tell her the truth, but I don't have the heart to tell her...
”
—Roses, Chapter 246: Suzi Q Joestar Visits Her Daughter

Roses (ローゼス, Rōzesu) is a minor character featured in the third part of the JoJo's Bizarre Adventure series, Stardust Crusaders.

Roses is an elderly, muscular man with puffy hair and a thick mustache. He wears a hat and a suit, with a collared shirt and tie underneath.

Roses is the driver and butler of the Joestar Family. Due to his time as a butler, he grows close to the family, even suffering greatly when Holy Kujo becomes sick and Suzi Joestar doesn't seem to know about it. He is a skilled fighter on his own, managing to defeat a Yakuza member with ease.

Roses is the butler responsible for the Joestar Family. He's worked for them for thirty years, since Holy was a child. When Holy becomes sick and Joseph Joestar travels to Egypt, Roses is left to take care of Suzi Q.

During the Joestar Group's journey to Egypt, Roses takes Suzi Q and a Speedwagon Foundation member to visit Holy. The Speedwagon Foundation member questions if Roses told Suzi Q about her daughter's Stand-based sickness. Roses replied that he tried, but didn't have the courage because he couldn't stand to see Suzi Q sad. Due to the possibility of Joseph not making it in time, leaving only a few days for Suzi Q to see her daughter before her death, Roses decides to tell her the truth to prepare her. Because of Suzi's childish, carefree and curious behavior towards Japan, she disregards what Roses has to say, which eventually leads to her getting in trouble with a Yakuza member. Roses saves her in time, causing Suzi to reveal that she already knows about her daughter's condition and he shouldn't have to worry because Joseph always finds a way out of dangerous situations.[3]