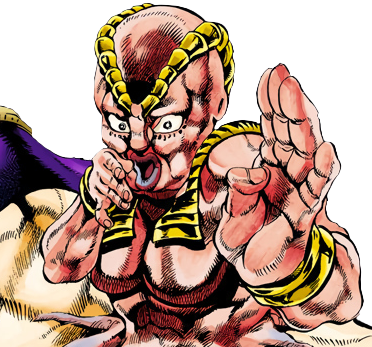 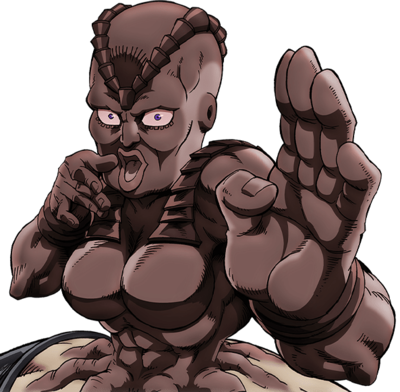 Empress (エンプレス（女帝）, Enpuresu) is the Stand of Nena, featured in the third part of the JoJo's Bizarre Adventure series, Stardust Crusaders. It is a parasitic Stand that grows from the flesh of its victim, eventually overpowering them.

Empress is a continuously growing Stand. It begins as a drop of blood that turns into a large wart upon making contact with another person's skin.[1] This wart utters "Chumimin" and grows larger, slowly forming a face that bears two large fangs. Empress grows arms before eating enough to take its final form.[2]

In its final state, Empress is a miniature woman with a round, bald head; large breasts; and a muscular physique. It still has fangs and also has ears that appear as mounds with shallow holes in the centers. It also has large, fleshy eyelashes. Two crests run from the forehead to the back of its head, and a shawl made of plates is draped over the shoulders. Two bracelets are worn on each wrist. The design is overall inspired by Indian Buddha statues.[3]

Controlled by Nena, Empress is a disrespectful and sadistic Stand. It constantly tries to kill Joseph and mockingly calls him its father.[4] It acts arrogant and believes that Joseph can do nothing to prevent him from killing it.[4][5] It also has no regard for the lives of innocent people, killing a doctor that tried to treat Joseph.[2]

Empress represents the tarot card The Empress, which represents grace and the power of reproduction.[6]

Empress is an exceptional hybrid between flesh and Stand that is both dangerous and frustrating to get rid of if planted on its victim.

However, its simplicity and mediocre physical prowess allow even Joseph's Hermit Purple to defeat it.

Once grown, Empress will be dangerous to its host

Empress must first be planted into another person through direct contact with Nena's blood but can otherwise be controlled by her remotely.[7]

The zone splattered with blood will develop a fleshy bud, similar in appearance to a wart.[1] Empress will then slowly and continuously grow out of the victim's flesh as long as it feeds off exterior sources relative to its size, be it small insects, fruits or whole chickens. Empress will eventually reach a humanoid form[2] and will constantly try to hinder, harm, or kill its host. For instance, it framed Joseph as a murderer, then, when it grew arms, bashed him with pots and tried to drive a nail into his neck.[4][5]

Empress is a mix of the victim's flesh and a Stand and takes properties from both. Thus, it can be seen and heard by regular people,[4] but only a Stand can harm it. However, being coated with tar can immobilize it.[5]

Upon seeing Nena's true appearance, Joseph speculates that Empress is eventually capable of assimilating another person and using them as a disguise for the user.[8]