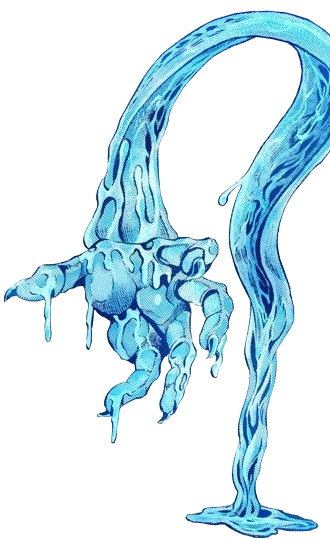 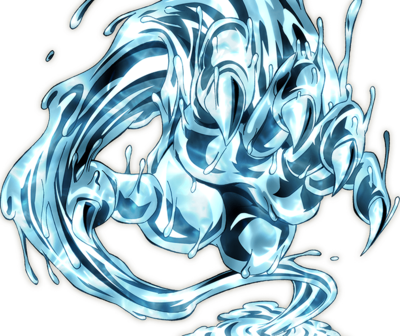 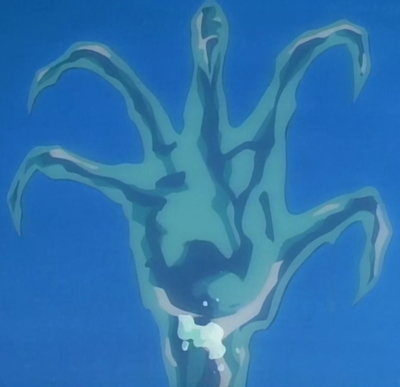 Geb is a water Stand which can be remotely piloted from afar. Its nature as a water-controlling Stand makes it very nimble yet deadly, as it can materialize a clawed hand able to tear through flesh and metal, as well as rip off a man's head.

Despite being named after an earth deity, Geb is bound to a small, shapeless mass of water (small enough to hide inside a canteen).[1] It usually takes the form of a tentacle equipped with a clawed hand. The OVA portrays Geb with a mouth.

It represents the Egyptian God, Geb, the god of the earth in Egyptian mythology.

Geb is a deadly water Stand

Geb's greatest strength is the range at which it can be controlled precisely, enabling N'Doul to sit kilometers away from his target, four kilometers when he attacks the Joestar Group.[2] Combined with N'Doul's ability to sense vibrations from faraway, Geb can reliably act while its user is safe.

It is nonetheless a basic Stand whose dangerousness comes more from N'Doul's skill as a Stand user than its inherent power. N'Doul exploited the surrounding desert to hide Geb under the sand and constantly attack by surprise,[1] thought of creating quicksand with the water[2] and used Geb to propel sand into the air, acting as a sonar to detect the sound of the sand falling on The Fool's glider.[3]

Geb, being a body of water, is completely amorphous and hence is exceptionally flexible and nimble, being able to evade Star Platinum's punch by twisting itself.[3]

Geb in the OVA

Despite being a mass of water, Geb's claw is strong enough to cut flesh, and even ripped a man's head off and pulled it completely into a metal canteen.[1][2] When it propels itself at a high enough speed, Geb can even cut through metal.[4] In addition, the water can act as a hard shield against projectiles.[3] In the OVA, Geb could also gather itself into a ball of water and shoot in all directions, tearing everything apart in a large area with fast water bullets.

However, the water is particularly vulnerable to heat, as Magician's Red's flames could partially evaporate it, wounding N'Doul.[4]