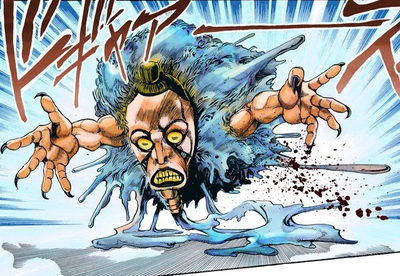 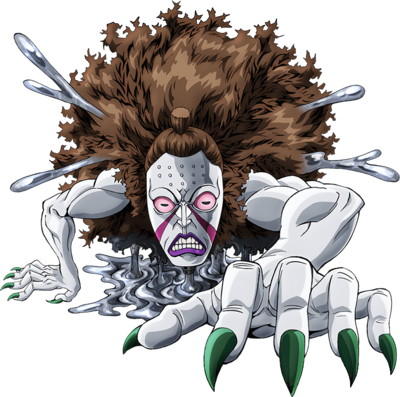 High Priestess (ハイプリエステス（女教皇）, Hai Puriesutesu) is the Stand of Midler featured in the third part of the JoJo's Bizarre Adventure series, Stardust Crusaders.

It has the troublesome ability to transform or assimilate into anything comprised of minerals, even something as large as a seabed. 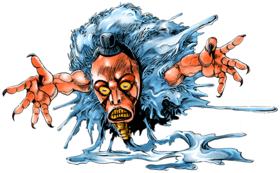 High Priestess is a rather small Stand, capable of fitting into a grown man's mouth.[1] Its appearance is that of a head and arms attached to a ball of short fur. Its face is in a constant frown with its teeth bared while the eyes have flat pupils, forming an overall menacing expression. Its eyebrows are perfectly arched, and a marking on each side of the face goes from the edge of the cheek to just below the eye. Several dots also mark the forehead of High Priestess. Its hair is tied into a short topknot. High Priestess's arms are muscular with claws sharp enough to cut metal.[2]

The design is based on the traditional dress of an African shaman.[3] Its face and fur is modeled after a Nigerian Igala Agba mask.[4]

Before Midler begins to talk through High Priestess, it acts like a savage beast. It mainly emits shrieks and laughs at the group's pain. It acts cunning, taking a variety of forms to catch the group by surprise.[1][2]

It represents the tarot card, The High Priestess, which symbolizes intuition and arcane knowledge.[5]

High Priestess is a formidable opponent physically speaking. Its small size and nimbleness make it difficult to strike and its claws are very dangerous, being able to cut through Joseph's metal hand.[6] This, combined with its ability that multiplies its options, makes for a fearsome opponent.

High Priestess possesses teeth harder than diamonds, making them almost unbreakable.[7] It can use them to bite hard on or crush the opponent by chewing them.

High Priestess can become any mineral and metal

High Priestess possesses the ability to shapeshift and assimilate itself into any type of inorganic matter, be it metal, glass or plastic.[2] Moreover, it can also replicate rather complex structures, transforming into a spear gun to shoot itself at the Joestar Group.[1] The transformation is convincing enough that cautious examination or even trying to touch it will fool anyone. Because of that, it can disappear into a wall and then reappear elsewhere to strike.[2] Its small size by default belies an ability to turn gigantic if it can assimilate a great amount of material like the stone of the sea floor.[1] 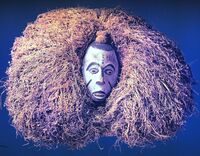 High Priestess's design is particularly based on an "Egu Agba" (エグウ・アバ, Eguu Aba) mask made by Igala people in Nigeria. "Egu" refers to the spirit of the dead. The mask is on display in the National Museum of Ethnology in Osaka, Japan.