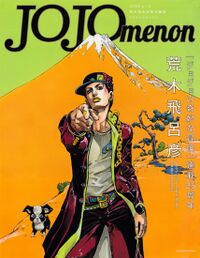 An interview with Hirohiko Araki in the JOJOmenon mook, published on October 5, 2012.

Araki: I wanted to draw something that I had never drawn before. Therefore, it’s probably the first time bust shots have made an appearance. As for the art, I want to draw a looser style. Instead of having a constant focus on intense fights, I think the readers also enjoy the off-beat interactions as well. Up until now I was pursuing the element of fear but I also want to incorporate a sense of relatability and looser aspects.

Interviewer: How have you specifically actualized these ideas?

Araki: For example, I have increased the number of white panels. I try not to draw everything to perfection but rather with a little more openness. I could illustrate as dark as I did previously but I intentionally included more white elements so the reader could pass through a section without being heavily invested in a facetious scene.

Interviewer: I do really enjoy how the art throughout the “JoJo” series has constantly evolved.

Araki: Rather than trying to change, I try to avoid illustrating old, already existing art. However, I do realize there are characters like Koichi Hirose or Tamami Kobayashi whose heights have gradually shrunk and that’s not great... haha.

Interviewer: Like, Funny Valentine from part 7 was the opposite as he steadily grew.

Araki: Ha, That’s okay because he was working out! (laughs) In reality, the characters constantly move through their lines and poses and they just happen naturally like the flow of nature.

Interviewer: Regarding the dialogue, it’s really amazing because the lines are so memorable that they even publish books such as “Famous quotes from JoJo’s Bizarre Adventure”

Araki: It’s amazing isn’t it! Haha! When I see my work being accepted by the younger generations, I feel glad to have been drawing all this time.