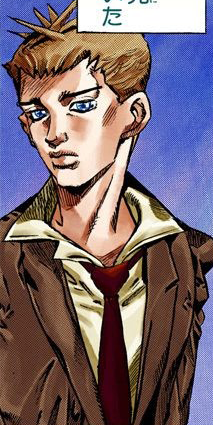 Nicholas is the elder brother of Johnny Joestar by five years, and the son of George Joestar II. Nicholas was a jockey, but died in a riding accident.

Nicholas Joestar was a scrawny young man who had a regular haircut featuring spiked interlaced locks of hair at the top of his head, appearing similar to a crest.

The series is known for alternating colors between media, the information presented below may or may not be canon.
Skin(Fair)
Hair(Light Brown)
Eyes(Blue)
Outfit
(Brown suit, biege shirt and dark red tie.)

Nicholas is capable of controlling large horses like his own perfectly, no different than when he is riding any other horse.

Nicholas is never a fraction of a second late. Whether Johnny tells him to run 200 meters in 17 seconds, or the next 200 meters in 23 seconds, he'll always finish exactly in that time. He was born with this ability, unlike his father. 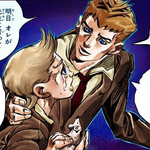 At the time, Nicholas was a promising jockey-to-be, having already won several trophies which were put on his desk. One day while practicing for his next race, with a new horse named Black Rose, said horse stumbled from something on the ground, which cost Nicholas his life. Diego claimed a white mouse was the cause of the accident – a mouse who Johnny believed to be Danny. Seven years later, it was Johnny who rose to fame as a racing prodigy. However, his father still did not acknowledge him and his feats, even asking God "why He had taken Nicholas and not Johnny".