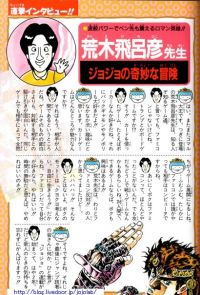 King Komaru: Well, it's King Komaru again. Making an appearance next is Hirohiko Araki-sensei, a connoisseur of little-known games.

Araki: When you say that, I don't mean games for the Famicon.

King Komaru: Hardly an elegant pastime, I think. What kind of things fascinate you about card games!?

Araki: Certainly, it's the thought of having another human as your opponent. Rather than being interested in the game itself, waging war against the opponent and the strategy is what's interesting. Even if it's the same game, the difference in opponent can cause an entirely new set of developments within the game.

King Komaru: Uh-huh. Of course it doesn't matter who you play with on a Famicom because the opponent is always a computer.

King Komaru: But Araki Sensei, I thought you were someone who was rather opposed to the Famicom...

Araki: Hahahaha!! That's not the case at all. My motto is "Don't think about your worries. Live your life freely!!" So, if I like the Famicom, I should play it!! If I think it's a waste of time, I don't have to play it!!

King Komaru: I see. Well then, to wrap this up, a few words for everyone reading this!!

Araki: It's already been 2 years since JoJo has begun serialization. Without forgetting what it was like to be a newcomer mangaka, I'll press on!!
”
[Translated by Eas]
“
コ はい。またまたコマル大王です。つぎに登場の荒木飛呂彦先生は、知る人ぞ知るゲーム通。