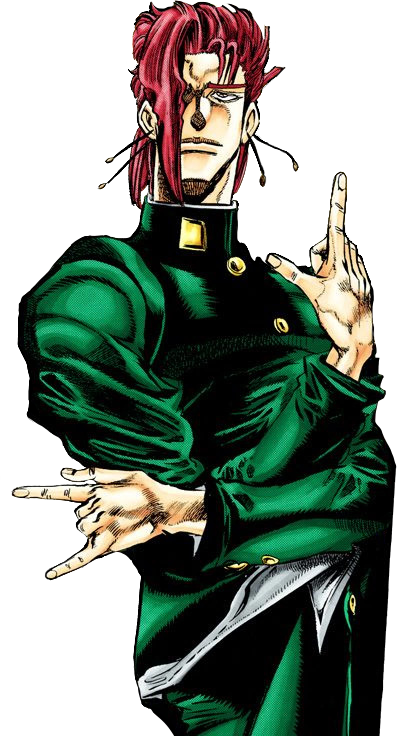 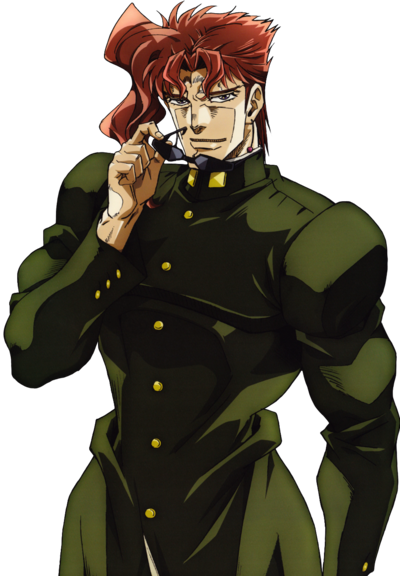 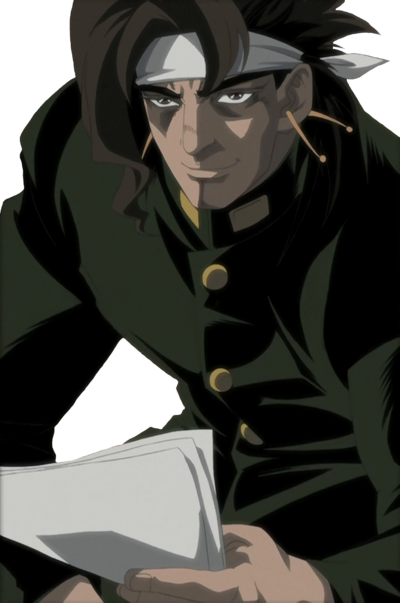 One you feel at ease around[9]

Blood loss after being perforated through the chest by The World

Later, Kakyoin acquires two thin scars vertically crossing both eyes from Geb, which he often hides with a pair of dark sunglasses.

Noriaki Kakyoin is first introduced as an evil and cruel teenager because of DIO's brainwashing. Thus he remorselessly attacks unrelated civilians and adopts a might makes right mindset.[10] However, he reveals himself as a righteous, though blunt individual. Kakyoin is ruthless with his enemies but loyal to his companions.

His reason for joining the Joestar Group is for both fighting evil, as he mirrors Jotaro's own explanations for saving his life,[9] and of course a sense of debt toward Jotaro for saving his life. Thus Kakyoin is also a brave individual, willingly participating in the dangerous journey to Egypt, and is also able to keep his nerves even in the direst situations such as having been punched through by The World.

Kakyoin is noted by Araki to be "the honor student type",[11] and thus can be described as haughty and somewhat introverted. Though he normally keeps a polite and somewhat formal behavior, Kakyoin is a rather cold and prideful man. He hates bowing down or brown-nosing. The humiliation of having been weak enough to bow to DIO was a part of his motivation for seeking redemption and revenge during Stardust Crusaders.[12] 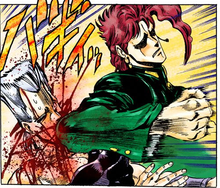 Kakyoin mentions he could never relate to people because of his ability, and thus never desired to make friends for most of his life.[12] He thinks only respectable individuals are able to be friends of his.[4] The Joestar Group is the only group with whom he has attached himself, but he cares very strongly for them. Araki himself mentions that if it weren't for their Stands, Kakyoin and Jotaro wouldn't have been friends.[11] Kakyoin has shown to lighten up with Polnareff, although he can also be very brutal and vindictive, having elbowed Polnareff too as a "reconciliation".[13] His attitude is notably worse with his enemies, whom he frequently threatens and belittles, and during his fights, he is very ruthless against them. Both as a hero and an antagonist, Kakyoin is particularly violent as he remorselessly kills all of his opponents (ripping Tower of Gray without qualm[14]), arguing that they were evil beyond redemption; moreover he viciously takes revenge on Mannish Boy by forcing him to eat his own excrement,[15] the first and only time he took exception.

Kakyoin has stated that if he were to fall in love, he would fall in love with someone like Holy, who gives off the feeling that anything will be alright and can calm anyone's hearts, making them feel at ease.[9]

Kakyoin happens to be skilled at playing video games and expresses confidence that he can challenge Telence T. D'Arby despite D'Arby making it clear he was good enough to amass a collection of souls by beating others at video games, especially the video game F-Mega. Despite having made the rookie mistake of forgetting to mash the acceleration button at the start of the race to gain a speed boost, Kakyoin shows great skill and comprehension of the game. He knows how to prevent a car from staying ahead, knows how to manage the energy bar of the cars, has extensive knowledge of the race track he plays on (to the point he knew the features of a complicated shortcut by rote), was skilled enough to ride on the wall of a tunnel, and could come up with advanced strategies to try to win.

Kakyoin's first name was originally intended to be "Tenmei" and is still used by Araki himself, despite it officially being "Noriaki". The change was the result of a miscommunication between Araki and his editor as the kanji can be read both ways. This can also be seen in Enya's hotel register, where Kakyoin wrote "Tenmei Kakyoin".[11]

According to anime producer Nobutaka Kasama in the 2020 Anime Expo interview about the anime series, the "rero rero" of Kakyoin was particularly difficult for Daisuke Hirakawa (the voice actor for Kakyoin) to pull off since it was to be repeated 17 times and so he had to train himself out of work (for instance rehearsing repeatedly during bathing).

Kakyoin's voice actor in Heritage for the Future (along with several other characters in the revisions of the game), Mitsuaki Madono, would later go on to voice Part 8 Josuke Higashikata in All-Star Battle and Eyes of Heaven.

Kakyoin's voice actor in the Stardust Crusaders Drama CD, Sho Hayami, also voiced Enrico Pucci in All-Star Battle and Vanilla Ice in Heritage for the Future, the Part 3 Anime, and Eyes of Heaven.