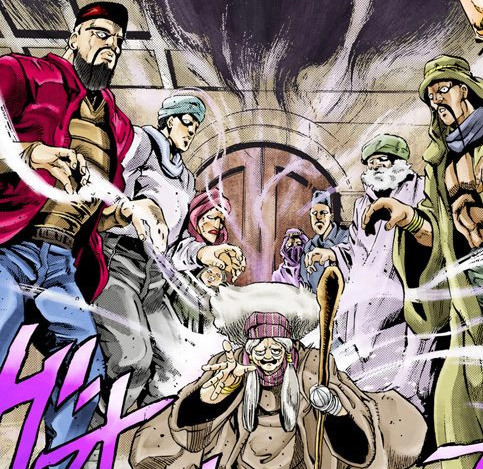 Undead (, Andeddo, lit. Deceased Person) are characters who are deceased but behave as if they are alive. This may be due to Stand abilities which are capable of reanimating corpses.

Vampires (吸血鬼, Kyūketsuki) are undead creatures serving as antagonists in the first three parts of the series, Phantom Blood, Battle Tendency, and Stardust Crusaders. They are created either through the acupuncture process of a Stone Mask or by another vampire giving a corpse their blood. As beings lacking natural "flow" of energy, they are unable to walk in sunlight and can be significantly harmed through Ripple.

A preternatural byproduct of a vampire commonly referred to as a Zombie (, Zonbi, lit. "Undead Person"), featured primarily in Phantom Blood and Battle Tendency. These secondary undead are the result of a vampire killing a human being by draining their body of blood. The corpses are then reanimated and controlled through the injection of vampire essence.[1]

Individuals whose souls or spirit (魂, tamashī) are incapable of passing through to the afterlife are forced to wander the Earth as Ghosts (幽霊, Yūrei). Though each ghost's cause of death is different, many of them can be classified as Jibakurei (地縛霊)[2] or Revenants, beings typically bound to a specific location on Earth due to their determination to accomplish a particular goal or not having found peace.

In Vento Aureo, although Bruno Bucciarati's life had ended, Gold Experience heals his body before his soul departed. His body continues to move only through the "life energy" that Giorno had given him.[3] As a living corpse[4] (生ける屍, Ikeru Shikabane), Bucciarati lacks bodily functions such as breathing, a heartbeat, or the ability to feel pain. However, it also allowed him to be immune to the effects of Green Day, and although the decay of his body gradually makes him functionally blind and deaf, he could still converse with others through the ability to observe and feel what individual souls thought.