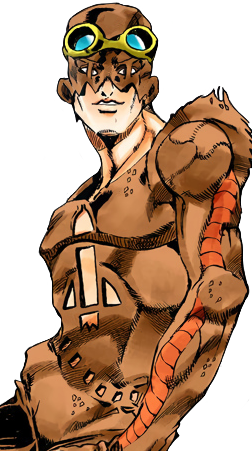 Lang Rangler is an inmate of Green Dolphin Street Prison sent by Enrico Pucci to assassinate Jolyne Cujoh and Weather Report on their way to the prison courtyard in order to stop them from delivering Jotaro Kujo's Stand DISC to the Speedwagon Foundation. He is a Stand User and wields Jumpin' Jack Flash.

Lang is a man of average to above-average height and medium build.

Very little can be seen of his face, as he is clad in an assortment of makeshift gear designed to insulate him from the effects of his Stand. This includes a flat-topped hat covering his face to below his eyes with a serrated bottom edge, and goggles. As such, nothing of his hair or even eyes can be distinguished, leaving his actual face enigmatic.

The series is known for alternating colors between media, the information presented below may or may not be canon.
Skin(Fair)
Outfit
(Brown bodysuit with orange stripes, red and white shoes.)
Goggles(Yellow with blue glass.)

Lang Rangler smirks as he's about to kill Jolyne

Lang Rangler is a calm and analytical Stand User who is nonetheless prone to overconfidence and murderous outbursts.

Lang's bio describes him as someone who tends to think about things logically.[3] Indeed Lang has devised a near fool-proof strategy in order to win his battles. For starters, he's experienced in navigating in a zero-gravity environment, his fingertips having been modified to work as suction cups.[3] When he's got his targets affected by his power, he then patiently waits outside of his power's ranger so that the zero-gravity environment kills the target and, if need be, shoots them with screws and bolts with specially made centrifugal shooter on his wrists. This allows him to safely wound his target and let the blood flow out of them, causing fatal blood loss.[4][5] During the fight, he is shown regularly talking to himself, analyzing the situation and the target's actions.[6]

Lang Rangler is usually calm but he's prone to violent outbursts when he's upset. He was imprisoned for hijacking and murder, stabbing a female professor sixty-nine times.[7] Likewise, when Jolyne Cujoh proves to be more of threat than he thought, he loses his cool and begins to threaten her and insult her.[8]

Lang displays some confidence, if not arrogance in the power of his Stand. He thinks that he can beat Whitesnake.[9] and sometimes declares that he's already finished off his targets.[10]

Lang's Stand is Jumpin' Jack Flash, enabling him to affect targets with weightlessness. With the centrifuges at its wrists, it can launch small objects like screws and bolts as bullets.

Lang also possesses suction cup-like fingertips as a natural ability of his own, affording him further advantage in weightlessness.

Lang Rangler was sentenced to 5 years at Green Dolphin Street Prison for hijacking. However, he also murdered a professor, stabbing her sixty-nine times.

Lang Rangler makes his first appearance when he is caught in a reflection and spotted by Weather Report whilst stalking Jolyne Cujoh, under orders from Whitesnake. Lang chases after her, Weather, and Emporio on all fours, trying to spit on Jolyne in order to activate his Stand, Jumpin' Jack Flash. They escape for the time being in a jacket using Burning Down the House, Jolyne heading to the factory to repair her boots. However, she is caught in Lang Rangler's anti-gravitational field and causing the Stand DISC of Jotaro Kujo, her father, to float out of her coat. Lang Rangler goes to grab it, taking advantage of the anti-gravity environment to deflect Jolyne's attempt to retrieve it and taking hold of the disc. He escapes further into the factory area, but is intercepted by Weather Report, whom he attacks using Jumpin' Jack Flash's centrifuges to fire scrap metal at him.

When Weather Report neutralizes his attack, he tries to fight directly using his Stand, but his arms burst into flames from the air resistance. To escape, he turns off the zero-gravity, leading to various appliances falling on Weather Report. Security alarms cause the hallways to begin to close, Lang Rangler firing projectiles against the wall to propel himself through the gate just before it closes. However, he is tailed by Jolyne and Weather into the main factory area.

His Stand's effect of having anything the affected touches become weightless starts to affect the air around Jolyne and Weather, quickly making them start to run out of air. Hiding until his enemies are distracted by their spilling blood, he fires numerous projectiles at Jolyne while she's distracted with plugging up the holes in the area, but she deflects them using Stone Free. While reloading his gauntlet for ammunition for his Stand, he takes notice of Weather Report's use of condensed atmosphere to form protective oxygen suits for himself and Jolyne, and strafes around Weather Report while the latter tries to fly out of Jolyne's range, firing scrap metal at him. Jolyne deflects the projectiles towards Lang Rangler, but he redirects those with his own. The scrap metal ricochets around the room until it hits an oil drum containing air, which flies across the room and crashes into Weather Report. Lang Rangler fires more scrap metal at Jolyne before she can reach Weather Report, but the deflected bullets hit two rats, who blind Jolyne with their blood as they explode. He fires more projectiles at Jolyne, intending to finish her off for good. 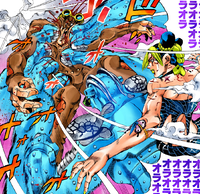 As he starts to leave, he wonders if he could beat even Whitesnake with this power, but then notices Stone Free's string tied in his Stand's centrifuges. She yanks him into range of his own stand, leaving him to writhe in the vacuum created by the effects of his attack. Reaching into one of the sneakers wrapped around his ankles, he takes disinfectant and manganese dioxide and mixes them together in a jar, creating pure oxygen. He throws it at Jolyne and breaks her protective suit, however, Weather gives up his own for her, causing him to think of an escape plan. Lang Rangler releases the zero-gravity field, but the rush of air brings Jolyne straight to him, as she delivers a punch-rush that sends him into the laundry basket, retiring him. Jolyne takes his entry pass for the courtyard and uses that, along with his hat, to open the door to the courtyard.