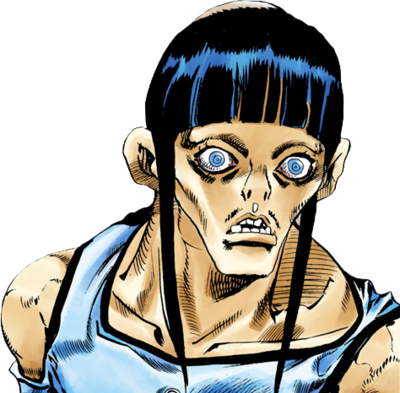 Severe trauma after his ribs are expelled from his chest

Guccio (グッチョ, Gutcho) is a tertiary antagonist featured in the sixth part of the JoJo's Bizarre Adventure series, Stone Ocean.

Guccio is one of the four inmates sent into the Ultra Security House Unit in order to assassinate Jolyne Cujoh but takes a passive role. He isn't a real Stand User, but was given Survivor by Whitesnake.

Guccio is a scrawny man with a triangular face, wide open eyes, a small flat nose, thin eyebrows, and a perpetually open mouth showing his teeth. Guccio sports a pencil mustache and a bowl cut with a shaven crown, resembling a tonsure, and two shoulder long strands of hair on each side of the head.

Guccio wears a long-sleeved shirt that expose his shoulders and midriff, and a pair of pants that similarly expose his hips. His pants have "SURVIVOR" written all over it.

The series is known for alternating colors between media, the information presented below may or may not be canon.
Skin(Olive)
Hair(Black with blue highlights.)
Eyes(Light blue)
Outfit
(Baby blue shirt and pants with a black trim, yellow and green letters.) 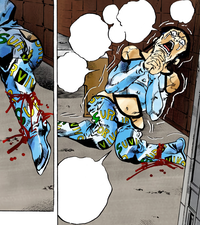 Guccio begs the heroes for mercy

Though briefly shown, Guccio is a meek Stand user too afraid to confront the Joestar Group inside the isolation ward and begs for their help when the Green Baby is born. Guccio lacks any fighting experience, and unwittingly becomes a part of Anasui's trap to attack pursuers.[2] Though he never engaged in fights himself, Guccio somehow found himself in the isolation ward.

Guccio has the ability to irritate people, resulting in fights erupting around him even as a child.[3]

His bio indicates he was imprisoned for sexual assault (and theft), making him a pervert.

Guccio's Stand, Survivor, was given to him by Enrico Pucci. It can influence people's minds through small electric signals, causing them to become extremely aggressive. Those influenced by the stand begin fighting indiscriminately while also powered up. Guccio hides somewhere to avoid the mayhem.

Ever since Guccio was a child, fights always erupted around him, and his ability to irritate people followed him all the way to his time at Green Dolphin Street Prison; Guccio had received a 5 year-sentece for sexual assault and theft. Though he never engaged in any fights, the violence that occured around him never stopped. Pucci noticed this about him, and endowed him with Survivor.[3] 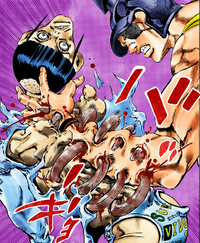 Diver Down turned Guccio into a spring trap NSFWTAG

Whitesnake orders Guccio to get into the punishment ward, so that Survivor takes effect and cause mayhem that'd possibly kill Jolyne Cujoh. The fighting begins to erupt, and then the emergence of the Green Baby, all the while Guccio finds a cell to hide in. He is quickly found by the Joestar Group and begs for their help. Instead, Narciso Anasui reshapes his innards using Diver Down, turning his rib-cage into a spring-trap.

Guccio used as a stereo

Guccio oddly walks away hoping to make it outside, but is noticed by D an G who asks about the situation and grabs him aside. Diver Down's trap activates and rips apart D an G's arm as Guccio walks away. [2] Guccio presumably dies and is later found by Pucci. With the Green Baby born, Pucci begins to celebrate by inserting a disc of Handel's Messiah into his head. Pucci takes a moment to appreciate the song but quickly moves on pursue his goal.[4]