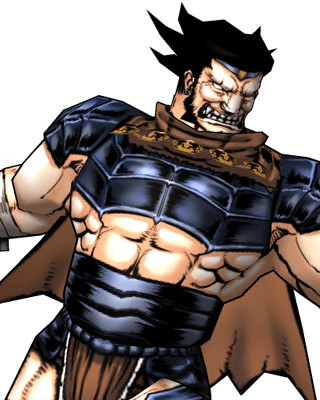 Winzaleo is one of the only five knights to survive and win the trial of the 77 Rings. He is omitted in the anime adaptation, but appears as a playable character in the Phantom Blood PlayStation 2 game with an original design. 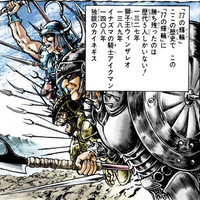 In the video game, Winzaleo appears as a ferocious, burly man with dark, spiked hair pointed backwards, prominent cheekbones, and a wide nose. He lacks eyebrows and has a thick beard. He wears a circlet with gold on the center, armor exposing his midriffs and thighs, and a cape adorned with gold gemstones. His eyes lack irises and he has sharp fangs. Winzaleo also has bandages wrapped around his arms and wears gloves.

In the manga, it is unknown which knight is specifically Winzaleo. However, it is possible that he is the knight drawn in the center due to his beard.

The series is known for alternating colors between media, the information presented below may or may not be canon.
Skin(Fair)
Hair(Black)
Outfit(Blue-gray armor, brown cape)

His personality in the manga is unknown, as he was only mentioned. In the video game, Winzaleo seems to take pride in his title as the "Lion King", as he declares his title in battle. He is described in the game's Profile Mode as a knight who earned the title of "Lion King" due to his fierce appearance, skill with axes, strong build, and chivalrous spirit.[2]

Being the first knight to complete the 77 Rings challenge, Winzaleo is extremely durable and capable of withstanding the weight of more than a hundred kilograms on his body. Despite having a handicap by wearing several weighted rings, Winzaleo manages to defeat all of his opponents and cross a 10km mountain range.[3]

Winzaleo wields a giant battle-axe and is notable for being skilled with axes. He is capable of using it with either one or two hands. His attacks consist of swinging the axe, slamming it on the ground, and thrusting it forward. By slamming his axe on the ground, he can create several seismic waves.
Zombie

After being revived as a zombie by Dio Brando in the video game, Winzaleo's strength is multiplied at the cost of making him weak to sunlight and the Ripple.
Concludes non-canon section.

In 1327, Winzaleo is the first knight to survive and successfully complete the challenge of the 77 Rings. He goes down in history as a legendary knight alongside Eijkman, Caineghis, Bruford, and Tarkus.[3]

Over five hundred years later, Winzaleo is revived by Dio Brando along with the other winners of the 77 Rings challenge. Following Dio's orders, Winzaleo, Eijkman, Caineghis, and Wang Chan sneak aboard a ship headed to America. After Dio takes over Father Styx's body, he summons the three zombie knights to defeat Jonathan Joestar for him.

In the end, Jonathan defeats him along with the other knights.[2]

According to Yusuke Sasaki, a producer from Bandai Namco Games, Winzaleo was initially designed by their staff. They asked Hirohiko Araki to take a look at him, who then made corrections.[4]

The three knights were added in the final battle of the game because the game producer thought Wang Chan wouldn't be a good final boss if he remained completely accurate to the story. However, he didn't want to completely stray away from JoJo's story, so Araki gave him various ideas.[4]

Although Yasunori Masutani was listed in the credits of the game, it did not state which role he performed. Masutani himself confirmed that he voiced Winzaleo on Twitter.[1]

Winzaleo is playable for one Extra Battle in the Phantom Blood PS2 game where he has to defeat Eijkman, Caineghis, Bruford, and Tarkus at the same time. He also appears as an enemy in the alternate final chapter and 77 Rings Knights Mode.
Winzaleo
Commands
Name
Japanese