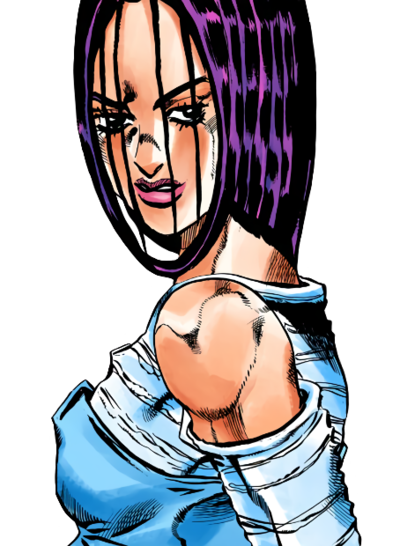 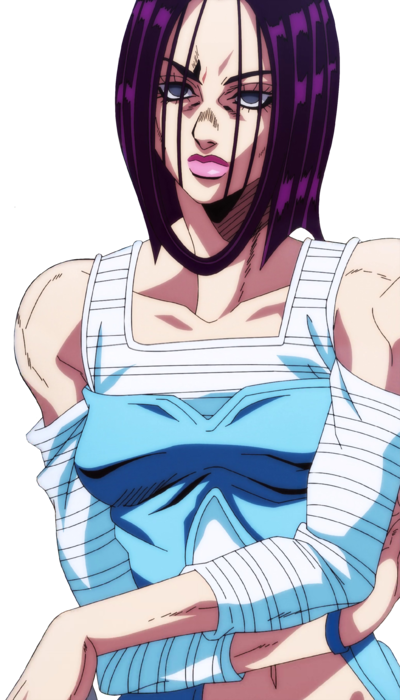 SO Episode 9
The character featured in this article is commonly referred to as "Mirashon".
SPOILER WARNING: Part 6 spoiler details may follow.
“
Cheating isn't part of the game... but things are bound to happen during one.
”
—Miraschon, SO Chapter 36: Marilyn Manson, the Debt Collector, Part 3

Miraschon is an inmate in Green Dolphin Street Prison to whom Enrico Pucci gifts the Stand, Marilyn Manson, and sends to assassinate Jolyne Cujoh. She then gambles with Jolyne, Ermes Costello and Foo Fighters in order to harvest their organs and take Jotaro Kujo's Stand DISC.

Miraschon is a woman of average height with a slim build. She has dark shoulder length hair with several loose strands coming down from the top of her head, obscuring her face. On either side of Miraschon's head are two bangs that come down and merge into one ovular frame. Between the parting of her hair there are 3 spiney hair clips.

Her attire is composed of a striped crop top complimented by similarly styled arm sleeves. Ontop of her crop top is a strapless blouse that splits down the middle at her chest and extends down to the middle of her thigh. Miraschon's pants are camouflage with various spots and patterns, her shoes appearing to be slip-ons.

Prior to receiving her Stand, Miraschon's bangs only reached down to the tip of her nose, and had three bangs that ran down her face rather than four. In addition, the two bangs that connected to her hair were separate in the manga, although this was changed in the anime. Furthermore, the anime makes her face bangs appear more akin to dreads, depicts her with pupils before receiving her Stand, as well as with a forehead scar from when Pucci slammed her face against a table. 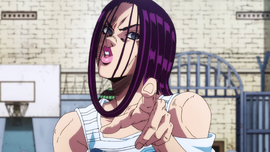 Much like the D'Arby Brothers, Miraschon has a habit of saying "Good!"

Miraschon is described as being a compulsive liar who enjoys stealing and gambling.[1]

Miraschon is a chronic yet skilled liar. During her introductory scene, Miraschon is shown pretending to having turned a new leaf to Pucci but Pucci discovers that she has stolen a gilded cross from him.[2] After receiving a Stand Disc, she is shown as being very articulate, and she's able to lie to the heroes and pretend she's totally innocent while in reality she had rigged the group's game of catch from the start. Miraschon is quite sly and adept in setting up traps. For instance, she baited the heroes with an easy $100 bet[3] into a second bet, taking into account the fact that the prisoners would have to go back to their cells soon, paying a guard to interrupt the heroes' game of catch,[4] and doing such things like sitting near Foo Fighters's water cup to provoke her, or switch the lights off while the ball is midair.[5] She almost manages to win by luring Jolyne into an elevator to separate her from F.F. and thus make them unable to pass the ball.[6]

Miraschon's main goal is to have a parole to reduce her sentence[7][8] so Pucci uses her to steal Jotaro Kujo's Stand DISC from the Joestar Group. She is also quite greedy and likes to steal precious object like Pucci's gilded cross.[2] While her primary objective was the Star Platinum DISC in Jolyne's possession, Miraschon also wanted to take the group's money and sell their organs to the black market.[8] Miraschon seems to believe that might makes right, mentioning that in prison one needs money and that only the strong can get it.[9] She's nonetheless a sore loser and tried to claim that Jolyne had cheated when Jolyne outsmarted her fair and square.[10]

Miraschon is more of a trickster than a fighter and thus she doesn't want to directly fight. As soon as she's wounded, Miraschon loses her calm and tries to flee[11] and when she's at Jolyne's mercy, she begs and tries to negotiate her way out.[12]

Miraschon's Stand, lent to her via a Stand DISC, activates when she makes a bet with someone. Upon winning, the loser must pay her back. If not, they will have something else taken from them, such as internal organs, as compensation.

Miraschon was sentenced to Green Dolphin Street Prison for 5 years after committing theft and armed robbery.[1]

Miraschon first appears when she meets the prison priest Enrico Pucci to speak about her parole. She expresses contrition for her crimes has to listen to Pucci discuss the difference between animals and men. Incidentally, he also eats a cherry whole and manages to tie its stem with his tongue. During this speech, Miraschon steals a jeweled cross. Pucci promises Miraschon to put a good word about her to the parole committee, making her happy, but then suddenly slams her face on the corner of the table because of the cross. To assassinate Jolyne and her allies, he decides to her and implants a Stand that will suit her personality: Marilyn Manson.

Miraschon makes a bet against the heroes

Miraschon then goes to the courtyard and appears to Jolyne Cujoh, Ermes Costello and Foo Fighters in the middle of playing catch with a baseball bat and gloves. When Jolyne saves her from a stray ball, Miraschon mysteriously elbows her. Learning that Jolyne and F.F. are at their 87th catch, Miraschon bets $100 each that they cannot complete their 100th. Jolyne accepts the bet reluctantly. Miraschon soon sits near F.F.'s water cup to distract her. Despite all the interferences, Jolyne and F.F. complete their 100 throws and Miraschon has to pay $200. However, she immediately proposes another bet: $1,000 for completing a second set of 100 throws.

Ermes accepts to play with F.F. while Jolyne steps aside. However, it soon becomes apparent that the free time is over. The trio tries to postpone the bet but Miraschon refuses, stating that any excuse would be good and that they brought it upon themselves by playing slowly. Eventually, the guard that Miraschon has bribed to interfere comes and confronts F.F. and takes away Ermes's gloves despite being bribed. This forces Ermes to cheat with her Kiss, which Marilyn Manson detects. Ermes's guilt from cheating awakens Miraschon's Stand, who attacks her by taking her money from her breasts, a gold tooth, and her liver. Jolyne makes another bet with Miraschon: if they complete 1000 throws starting from their current score, then Miraschon has to give back everything to Ermes. Miraschon accepts.

As the prisoner must go back to the wards, Jolyne and Foo Fighters continue to play catch. Miraschon lures Jolyne and F.F. into the showers and switches off the lights while the ball is midair. Thankfully, Foo Fighter catches the ball. Foo Fighters shoot in the direction of Miraschon, hitting her arm and forcing her to open a door shedding some welcome light. Miraschon then lures Jolyne in a service lift whose thick door and fenced gates close before Foo Fighters can pass the ball. However, F.F. keeps the doors open just enough for Foo Fighters to throw the ball and for Stone Free to unravel it, making it pass through the fence.

Miraschon is now locked with Jolyne, who smacks her and forces her to give Ermes back her liver. However, the same guard from earlier then comes and takes Jolyne's ball before tossing it to the grounds as his task is accomplished. Jolyne has lost and Miraschon is able to summon Marilyn Manson, who dominates Stone Free and pins it to the wall. Gloating since Jolyne lost and attempted to cheat, Miraschon expects to take off her organs but also sees Jotaro Kujo's Stand DISC and tries to take it. However, Jolyne can still violently throw the baseball in her general direction, attached to a string so that it returns to her. Jolyne indirectly pummels Miraschon, who is defeated. Because Whitesnake has erased all memories of itself and Pucci, Miraschon's disc is useless.

The anime features a different resolution to the battle against Marilyn Manson.[13] Instead of forcing Miraschon herself to cancel the attack, Jolyne finds a loophole in the terms of their bet. The Stand recognizes it as legitimate, recalling itself, returning all the collected items and allowing the bet to continue unimpeded. Jolyne uses this opportunity to repeatedly pummel Miraschon until the bet is complete with 1,000 throws that put her out of commission. Her disc still remains useless due to Whitesnake erasing her memory.