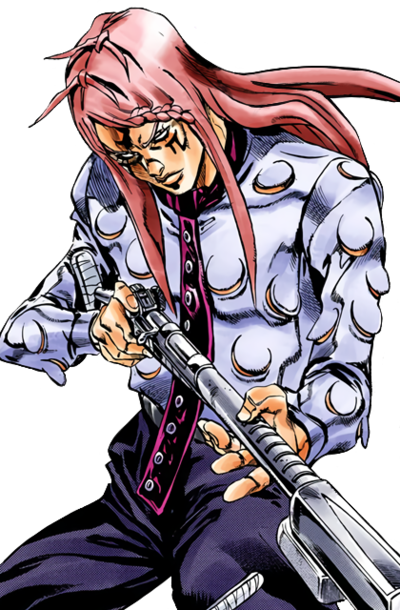 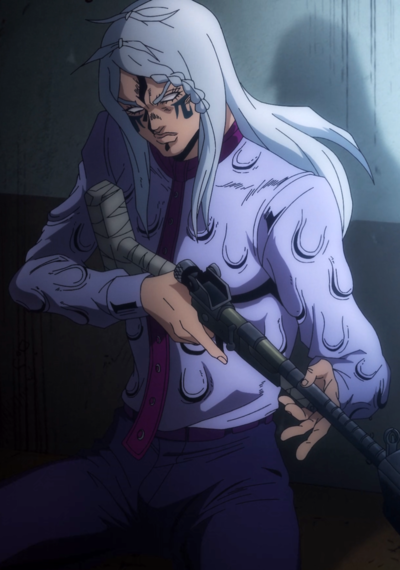 Monster Strike
“
Meteorologists say the wind's movements are unpredictable. They have a point. But the wind isn't completely unreadable.
”
—Johngalli A., SO Chapter 14: The Visitor, Part 4

Johngalli A. (ジョンガリ・Ａ, Jongari Ē) is a secondary antagonist featured in the sixth part of JoJo's Bizarre Adventure, Stone Ocean, specifically the "The Visitor" story arc.

Johngalli A. is a blind assassin directly responsible for framing Jolyne Cujoh and sending her to Green Dolphin Street Prison. He is one of DIO's last servants and ambushes Jolyne and Jotaro Kujo inside the prison. Johngalli A. is a Stand User, and he tries to snipe the Kujos with the help of his Manhattan Transfer.

Johngalli A. is a man of above-average height and medium build. He has long, light hair, including a small braid bordering the left side of his face; and his cheeks are marked by a thin, vaguely tribal symbol. Johngalli A. has cataracts, making his irises appear entirely white.[3] He also possesses matching tattoos of Earth on his back and shoulders.

Johngalli A. wears a plain shirt and dark pants, which feature regular nearly full circular cuts, so that round patches dangle from the clothes. He also wears a holed tie with a square end.

Johngalli A. wants to avenge DIO by assassinating the Joestars

As a loyal follower of DIO, Johngalli A. shares his plan with Enrico Pucci. At one point, Johngalli A. is shown expressing his wish to get revenge for DIO and claiming how the Joestars robbed his heart of his support, DIO.[4] It is unknown how much of this is true since the scene happens in the timeframe where Jolyne and Jotaro are witnessing an illusion by Whitesnake.

Johngalli A. will stop at nothing to fulfill his objectives. Aiming to take revenge on the Joestar family, he participates in the plan to frame Jolyne Cujoh for murder and works towards killing her and Jotaro Kujo inside the prison.[5] He also readily considers sniping Emporio Alnino, a little boy[6] or kill a guard to reach the Joestars.[7]

An ex-soldier, his sentence is 7 years, for murder.[8] As a sniper, Johngalli A. is quite analytical and cool in his approach, saying to himself all the necessary parameters for him to succeed at sniping, like his target's height, the direction and force of the wind, and his estimations about the trajectory of the bullet.[4][9]

Johngalli A. is one of DIO's followers and was fanatically devoted to him. It is mentioned that Johngalli A was a veteran sniper before cataracts turned him nearly blind.

According to the light novel Over Heaven, around the time when the Joestar Group arrived in Egypt, DIO had his last meeting with Enrico Pucci. Not wanting them to learn about Pucci, DIO assigned Johngalli A. as a bodyguard to protect him on his way back to America.[10]

The day Jotaro Kujo comes to visit his daughter, Johngalli A. and Enrico Pucci enact their plan to take Jotaro out. Posted in the men's showers when Jotaro arrives, Johngalli A prepares for his part of the plan. Whitesnake traps Jotaro and Jolyne in a dream from which they eventually snap out.

On the ground, Johngalli sees Whitesnake and asks him to take him back to the men's ward but Whitesnake kills him with his own gun due to the fact Johngalli is the only person to know of Whitesnake. Whitesnake makes it look like he committed suicide, using his death to turn him into a scapegoat and to explain the murder of the guards.

Johngalli A. was obtainable for a limited time as a collaboration character in the mobile game Monster Strike. 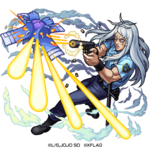