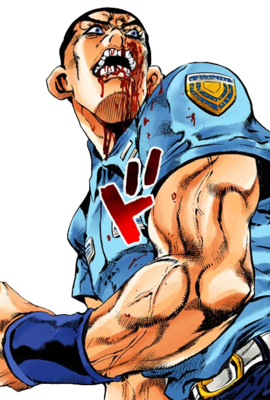 SO Chapter 66
“
I can see all your strengths, you guyyyyys. Bring it on!! Fight club!!
”
—Viviano Westwood, SO Chapter 60

Westwood works as a prison guard in Green Dolphin Street Prison and is one of the four people sent to assassinate Jolyne Cujoh in the Ultra Security House Unit. Under the influence of Survivor and in conjunction with his own Stand, Planet Waves, he proves to be a deadly force in close-quarters combat.

Westwood is a prison guard trained to detain prisoners. His methods of holding down prisoners involve crippling them. 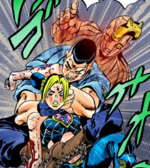 Viviano tightens his opponent's left shoulder joint at the same time as the neck, preventing them from raising their right arm. The only weakness to this technique is that the person he is detaining can still use their right hand to grab his crotch, but it wouldn't be a problem as long as Viviano is careful.[10] Viviano uses this technique to hold enemies long enough for the meteors from his Stand to hit them. Viviano is also capable of using this technique with just his legs.[10]

Viviano works as one of the guards in Green Dolphin Street's Ultra Security House Unit. After Jolyne Cujoh is thrown in there as punishment, Viviano and his partner Sonny Likir patrol the ward to hose the prisoners in their cells as part of the daily shower. Viviano bets $15 that Jolyne doesn't hide the moment she sees their flashlight and loses barge into Jolyne's cell with a floodlight as part of a bet. Unbeknownst to them, the water from the hose has spread to every cell in the punishment ward and is helping Survivor in increasing everyone's aggressivity. The hose malfunctions and some water splashes Viviano's uniform, who lightly hits Sonny's shoulder without thinking. The dispute degenerates into a no-holds-barred fightfrom which Westwood comes out victorious after locking his leg. His bloodlust not yet satiated, Westwood opens the door of all the cell and publicly challenges the inmates. Westwood begins to fight Jolyne. 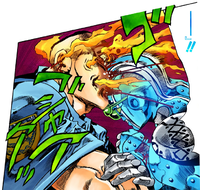