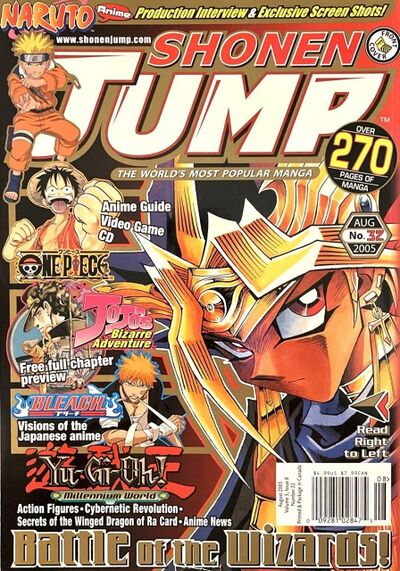 Official Website
This article is for the monthly magazine by Viz Media. For the weekly magazine published by Shueisha, see "Weekly Shonen Jump".

The magazine serialized and previewed chapters from popular shonen series, such as One Piece, Naruto, Yu-Gi-Oh! and Bleach. It also contained news on anime and manga, as well as featuring various articles on Japanese video games and media. The first issue was released in November 2002 with a January 2003 cover date.

In June 2002, it was announced by Shueisha that an English version of their popular Japanese manga magazine, Weekly Shonen Jump, would be published oversees by VIZ Media. Though the magazine would be based on Weekly Shonen Jump, Renee Solberg—the marketing manager for VIZ Media—noted that it wouldn't be a carbon copy of the original magazine. Rather, they would be "selecting the material most appropriate for the American market." Though this mostly consisted of series that had an already-existing popularity in the west, like Dragon Ball Z and Yu-Gi-Oh.[1]

The biggest change from its Japanese counterpart would be the switch from publishing weekly to just once a month. According to Seiji Horibuchi, the CEO and co-founder of VIZ Media, this was done to better fit the American comic distribution system.[2] Despite this, Shonen Jump would keep the right-to-left reading style seen in Japanese manga in juxtaposition to standard American comics.

SJ: How did you start drawing? What were your early influences that made you want to become a manga artist?

Araki: I grew up in the 1970s and during that time there were many manga artists with various artistic styles. It was the renaissance of manga and I was completely engrossed by it.

SJ: How did you become a full-time professional manga artist?

Araki: When I was in high school, around when I was 16, I entered a manga contest and made it to the final round. My work was praised so I decided to become a manga artist. I made my debut when I was 20 years old with Poker Under Arms, a 31-page short. It was awarded the Tezuka Award.

SJ: Between Baoh (your first manga) and JoJo, your artwork makes a dramatic change. Why did you change your style? What kind of training or practice did you undergo?

Araki: Muscular actors such as Sylvester Stallone and Arnold Schwarzenegger were extremely popular back then and that is where I got my influences. At the time, I was creating a story with a theme focused on the "physical body," so my drawing style changed to a more muscular look.

SJ: What inspired you to create JoJo?

Araki: I was thinking about creating a manga with the theme of attaining the ultimate body. In the end, the theme evolved into the celebration of life, family and bloodline: from parent to child, and then on to the children's children.

SJ: The JoJo series has strong horror elements. In some ways, seems like a horror manga inhabited by shonen manga heroes. How did you develop this style? Did you ever consider drawing a straight-forward horror manga instead of a shonen manga?

Araki: No. I prefer creating manga that is suspenseful rather than horror.

SJ: The JoJo series takes huge plot twists when it switches from Jonathan to Joseph, and Joseph to Jotaro. When you began the series, how far in advance did you have it plotted? Did you know you would jump 100 years in the future and introduce "Stands"?

Araki: Yes, I plotted ahead when I first started the series. The main characters would fight a common enemy, a formidable enemy, as if inheriting their ancestors' unfinished business from the past.

SJ: The voyage from Japan to Egypt in this JoJo series is full of details and local color. Is it based on a journey which you made yourself?

Araki: Yes, I always travel to the locale and recreate the locations based on the trip.

SJ: Your characters have incredible clothes, hair and fashion. Their clothes are so unique, they are almost similar to superhero costumes (although much better-looking). How do you come up with ideas for their appearances?

Araki: I make sure the clothing enables you to recognize a character even when they are drawn small. I use sculptures from the Roman Era or fashion models as reference when drawing them in standing poses.

SJ: JoJo seems to have an American and European influence, not only in the settings and characters but also in the artwork. Why did you choose to tell a story with British, American and Italian main characters? Do you consider yourself influenced by non-Japanese comics?

Araki: I was influenced by the Italian lifestyle, their way of thinking, fashion and their design sensibility. I love all historical painters and artists so I consider museums a sacred place.

SJ: What is your advice to readers who want to become comic artists?

SJ: "Stands" are an extremely original idea and have influenced many other manga artists who use "spirits" or "partners" in their manga. How did you get the idea for this power? Is it based on the idea of "possession"?

Araki: The concept of Stands came from Guardian Spirits. I wanted to express in my artwork how every character always has a spirit with him and they each have their own special powers and characteristics.

SJ: Many, but not all, of the Stands have a robotic/mechanical appearance. Others look like ancient idols or prehistoric artwork. How do you design Stands? Is there any deeper meaning to the appearance of Stands?

Araki: I envisioned the Stands to have a mechanical and a spirit-like look but not completely. African masks are a perfect example and that's where I got my influences.

SJ: Do Stands have a "will" or "intelligence" separate from their owners? Can they act against their owner's will? Do the same Stands reappear over history with different owners?

Araki: I don't see why such special Stands can't exist. It's possible.

SJ: When Stands first appear in JoJo, they are named after Tarot cards. Later, they are named after Egyptian gods. Within the world of JoJo is the idea that it's the other way around—that the cards and gods are secretly based on the Stands from ancient times? Or, within the world of JoJo, is the Stand/Tarot/Egyptian god connection just a convenient naming system made up by the characters such as Avdol, Dio and Enya?

Araki: There is a mystical element to ancient and archaic times. I thought it was perfect when expressing what a Stand is.

SJ: After you stopped using Tarot cards and Egyptian gods for Stands, did you consider coming up with any other kind of group naming system? (Such as the "Minor Arcana" of the Tarot?)

Araki: I thought 22 tarot card characters [the so-called Major Arcana of the Tarot—Ed.]would be enough when I initially started, but as the story progressed it wasn't, so I had a hard time naming the characters.

SJ: The JoJo series all have unique settings, both in time and place: 1880s Britain, 1930s Europe, near-future Florida. Even the Josuke storyline, which is set in Japan, is set in an extremely distinct city, instead of a "generic" Japanese city, like many manga. How do you choose your settings? Do you enjoy designing and drawing backgrounds?

Araki: My settings are always places to which I have been personally, and I always recreate the cities and places based on what I felt from being there. Morioh from the fourth series is based on the city where I was born, New Town of Sendai.

SJ: While most shonen manga characters usually overwhelm their enemies with strength and courage, the characters in JoJo are often caught in traps and tight situations (often literally caught in small spaces), where they must use cleverness to defeat their enemies. Does this reflect an interest on your part in mysteries and logic puzzles?

Araki: In order to create suspense, I think it's necessary to approach it like you are constructing a mystery novel. I always keep in mind the characters must act based on logical thinking.

SJ: I hear that you are a fan of F-1 racing. Have you ever considered drawing a manga about it? Do you still watch it on TV?

Araki: I like watching F-1 racing but I don't have a driver's license so I doubt I'll be able to draw a racing manga.

SJ: Do you listen to a lot of music? What are you listening to at the moment?

SJ: Your current series, Steel Ball Run, doesn't star any of the same main characters as the JoJo series, but seems to involve "Stands" (although they aren't called "Stands"). Is it set in the same "world" as JoJo? Are you a fan of the Western genre?

Araki: Speaking of the Western genre, my childhood hero was Clint Eastwood and everything stems from that. My debut manga was a Western manga. Steel Ball Run is a parallel universe from the world of JoJo.

Shonen Jump (July 2017)
Magazine
Interview
Published July 17, 2017
👤 Hirohiko Araki
📜
Manga
Anime
Stardust Crusaders
Diamond is Unbreakable
“
SJ: Much of the emphasis of your new book, Manga in Theory and Practice: The Craft of Creating Manga is on shonen manga storytelling—is your advice the same for other kinds of manga? Also, do any Western comics come close to capturing the manga panel development work you describe in your book? If so, which ones?

Araki Sensei: I think it can be applied, but I'm not too familiar with American/Western comics so I can't give specific examples. However, I believe that detailed, precise manga panel development designed to depict intricate emotions is the defining feature of Japanese manga, and that approach can be applied in various forms.

SJ: JoJo's Bizarre Adventure has a lot of horror elements and quite a bit of gore. What are your favorite horror movies?

Araki Sensei: Dawn of the Dead, The Walking Dead and World War Z.

SJ: One of the endearing quirks of the JoJo's Bizarre Adventure manga is the fact that many of the characters have names based on bands or musicians. Why did you decide to do this?

Araki Sensei: Because there are times when I find inspiration for characters and Stands through music.

Araki Sensei: It depends on the Stand.

SJ: There's been a major JoJo revival the last ten years with all the anime series being made. How does it feel to have your series reach new heights of popularity again after so many years?

Araki Sensei: I'm extremely grateful for all the support from the fans. There are new, younger fans being introduced to the original manga after experiencing JoJo through anime and other mediums. The fact that there's a new generation of readers is the core of what JoJo is about passing the torch on to the next generation.

SJ: Which of the Joestars would you want to hang out with the most and why?

Araki Sensei: Josuke in Diamond Is Unbreakable. I drew him as if he were a close friend.