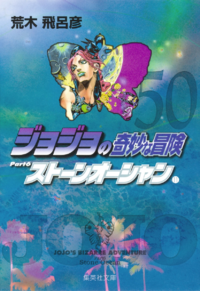 Hirohiko Araki's afterword, written in the final volume of the Bunkoban version of Stone Ocean on February 18, 2009.

“
The truth is, I don’t really know what to say about this. Writing this sixth part of “JoJo’s Bizarre Adventure - Stone Ocean”, I started feeling a great sense of satisfaction regarding the Stand’s powers. I felt like I had reached the peak of my creativity, as an author I had drawn everything my capabilities allowed. ‘Time’ that got faster and faster for humans’ senses to perceive, getting closer to the concept of infinite – given we can’t really comprehend much of it. How could there possibly be a Stand power bigger than this? “There’s nothing more incredible, my creativity has reached the highest point”, that’s what I thought. I normally think that feelings like a sense of satisfaction or personal realization are extremely scary. Finding yourself in a situation where you think everything’s going well and you don’t need to do anything more is without doubt a terrible situation, as a person and as a mangaka, but also if we think about society and the development of science, philosophy, art and culture in general. People act to achieve something, to obtain satisfaction above all else, but what do they do when they reach it? This contradictory feeling crept up my heart while I was coming up with an ending for ‘Stone Ocean’.

Jolyne Cujoh, our protagonist, felt a deep void in her heart too because she was missing the paternal love that brought her to befriend the shady guy that caused her to be imprisoned, after causing a car accident. But what’s important is the progress she makes because of that, because of the actions she has to do to save her father she becomes the strong woman she is. If we look at this story as a telling of the protagonist’s growth, her story had ended. So know what should I do for the accomplishment of this manga? In other words, I don’t have anything more to draw. It’s over. ‘JoJo’s Bizarre Adventure’ has reached its summit.
This is ‘Stone Ocean’.
The end.
But this is not right, not at all, it feels wrong. The fact that I’m feeling accomplished should not be a good thing.
It’s like a red light is in front of me, what should I do?
This is what I was thinking then, until I had an idea.
Go back to the origins! Isn’t this how Renaissance happened in Italy, going back to Greeks and Romans concepts in classic art? The French painter Gauguin also built a whole new painting going back the origins that Tahiti represented for him.

I need to strengthen further Father Pucci’s Stand power. This way time, the characters, the bloodlines and the whole universe will have a turnaround and go back to their origins. For ‘JoJo’s Bizarre Adventure’ I had to leave modern days and return to nature. I had to change Stone Ocean’s ending right before the last chapters for this reason, I brought out all the nostalgic feelings I had in my soul and this is why it came out like that. Jolyne Cujoh's memories are different, but I think her love and emotions will remain forever and surely grow. I want the protagonist for the seventh part to be fighting against nature in a way that teaches him how to be mature. These were my thoughts upon writing the sixth part, maybe these things shouldn’t be said or written but this is the author’s afterword right? It came out like this.
”
—Hirohiko Araki
[Translated by macchalion][1]
“
第6部『ストーンオーシャン 』あとがき

Other languages:
English • português do Brasil
Retrieved from "https://jojowiki.com/index.php?title=Interview:Stone_Ocean_Bunko_Vol._11_(February_2009)&oldid=744242"
Categories: