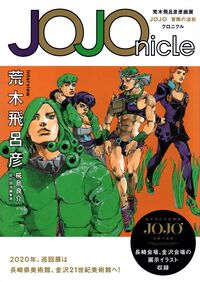 Interview with Hirohiko Araki released in the JOJOnicle artbook, published on December 19, 2019.

This time, after the exhibitions in Tokyo and Osaka, I got to have original art exhibitions in Nagasaki and Kanezawa. Both of these cities have deep cultural histories and unique local environments, and the art museums we used were architectural masterpieces as well. I am greatly pleased and honored to have the opportunity to display the original artwork of JoJo in these locations.

In addition to the twelve large originals, I created one new key visual each for Nagasaki and Kanezawa. The motif for them was the Japanese artwork "Kakitsubata-zu" (by Korin Ogata). The characters from JoJo will be present, so please come meet them at Nagasaka and Kanezawa. I hope you will enjoy the experience.

Interviewer: There's going to be an art exhibition starting January 2020 in Nagasaki, and in April in Kanezawa. The official visual for these exhibitions features many characters from JoJo's Bizarre Adventure, right?

(Araki does all his coloring in analogue. He says, "You know how a lot of color inks have been going out of production lately? Some of these makers used to produce really good colors, too. It's a bad situation.")

Interviewer: I was surprised at how some of the characters had their costumes renewed. Wamuu is wearing sneaker, for instance.

Araki: Ahahaha. I was imagining him as an athlete. He wore sandals during the serialization, but this time, I thought, maybe I'll put him in sneakers. It might be because the Olympics are coming soon. But, it's not like I want to change everybody's costumes. For example, Sandman has to be barefoot. He mustn't wear sneakers. I designed Lisa Lisa with her belt at her waist, because I felt her fashion from the serialization had become dated. This Lisa Lisa, she's unrestrained, don't you think? It might be because I tend to picture her in classic clothes, but I like how unrestrained she feels new. I wanna go "Teach me a lesson, missy!" Oh wait, she's a mother, huh? (laughs) And, while the same goes for Kakyoin, I represented Lisa Lisa's shadow with dots. Actually, I also drew Jotaro's shadow with dots in the previous original artwork. It might be the influence of "Pumpkin", by famous avant-garde artist Yayoi Kusama. Its surprisingly nice to represent a 3D shape with dot gradations, isn't it ?

(Much like with typical original colored artwork, he starts by coloring the soft skin tones. "It's import to do it in one go. Manga artists have deadlines, so there's no time to get too detailed", says Araki)

Interviewer: Doesn't the president stand out?

Araki: I had the president slightly twist his mouth, to give the impression he's plotting something. Those things are how I express these characters. Overall, the president's pose is one I'm especially satisfied with. Also, don't you think Polnareff looks a little sexy with that lei around his neck? Ermes is the only one who's strongly expression her emotions. She's the one shouting, "What's going on here?" (laughs) The other characters are acting relatively cool, so I had her as the one contrasts.

Interviewer: Johnny also leaves a strong impression since he's posed with both his hands in fists.

Araki: I pay attention to the expressivity of the hands, as well. The hands can speak too, right? Once again, these characters aren't just closing or opening their hands. There's movements in their fingers, and creating formations with them. That's the sort of thought I put into each character's hands while I was drawing them.

(The original art of the key visuals easily exceeds 2 meters when lined up side by side. It was made with the experience he gained from making the 12 large original artworks from one and a half years ago)

Interviewer: I wasn't expecting Giorno, a main character, to be placed on the right edge. Considering his popularity, he could have been the centerpiece, don't you think?

Araki: I didn't think at all about drawing popular characters, or ones the readers would like. What's important is the layout and the shape of the characters. The first character I placed was the president... Maybe because he acts so haughty (laughs). After deciding on the president and other main features, the next thing I did was place the males and females evenly, and then, while it woud be fine to bring a main character like Giorno to the front, I instead deliberately had given him the duty of handling the most important spot on the edge.

Interviewer: There's a lot of characters who are grouped up in pairs, like Sandman with Pocoloco, and Prosciutoo with Risotto, right?

Araki: It wouldn't be interesting anymore if all the characters were scattered about, so instead I laid it out so several of them get grouped together. For this official visual, the gaps are extremely important. For example, from the right edge, there's Giorno, then a few characters, then a line break with the president, then after the gap, there's a small space before Sandman... and that's how I designed it. That gap is actually an important thing called the "rhythm". It's like you can't settle down without it. People who've drawn still-lifes might understand, but there's a balance to the weight of an artwork.

To tell the truth, this official visual is based off a famous piece called the Irises screen by an Edo-period artist named Kourin Ogata. One of my themes is using old art as a theme to draw JoJo illustrations. Th Irises Screen is also a pattern, and it is also a joint. It gives the sensation of being 3-D, and it gives the sensation of having space. What makes the Irises Screen great is its sense of rhythm, its layout, and its felling of life. Placing JoJo characters into that was a good fit. There's the combination of purple and green colors, of course, but the sharp, bouncy grass fit well too. The parts I absorbed from the Irises Screen was the color combination, and the rhythm created by the layout. It's not an imitation so I don't think you would notice Kakisubata-su was the motif if nobody told you.

(The Irises Screen is an art piece that has been designated as a national treasure. It consists of a right side and a left side, and uses green and ultramarine to depict a group of irises in full bloom. This piece could be said to be a representative of not just the Edo period, but all of Japanese art history. It was made by the Edio period artist and craftsman Korin Ogata (1658-1716). His works have been appraised for the strong design sense, and include many paintings, as well as large folding screens, and smaller items, like handheld fans.)

Interviewer: Lately, you original artworks have been ones that bring images of Japanese art to mind. Does that have anything to do with why JoJolion is set in Japan?

Araki: No I don't think so. I've always thought artists like Hokusai Katsushika were really good. There's a part of me that thinks that way because I'm Japanese, but his most famous works really are good. When I draw, I use a flat ukiyo-e style background and my humans have a Renaissance-style 3-dimensional feel to them. It's a fusion of the two, you see?

Interviewer: A combination of Japanese and European?

Araki: Hm, not quite. It's an otherwordly space. What my art does is create a fantasy world.

Araki: The color of the background is based off the bricks used in European buildings. I could also have made the background bright red, for instance, but I ventured to go with the brick color this time. This brick color was made by mixing 5 colors together. It's a color used in buildings, so it's calming, isn't it?

Luxurious and showy colors are nice too, but i want this art to have a low-key attitude. I don't like to overwhelm the people who come to see it. It's important to be able to relax the atmosphere. So, I'd like people to fell the atmosphere of the place it's displayed in. I also, I hope that they'll display it in a restaurant.

Interviewer: Your last large original art used 12 sheets and had 24 characters. Does the pattern of 12 continue with this one?

Araki: I was a little bit particular with the number 12 on this one, too. That's to align with how there are 24 hours in a day, and so on, that sort of formula of the natural world. I draw my art as a lucky talisman. A guardian deity is another way to put it. I think it's the same with emblems. That's how I draw my art. That's why I use celebratory colors. When I draw, I'm thinking, "I hope good fortune will befall the people who come see this."

Interviewer: Going to the basics, what made you want to hold an art exhibition?

Araki: Manga is something that is printed onto paper and then read, but Weekly Shonen Jump's print quality has always been bad (laughs). I used to think that when there were things that couldn't be expressed through print, that was inevitable, but my desire for people to see the things that couldn't be expressed in print was my motivation for holding art exhibitions. There have been times people would tell me, "it's meaningless to color things in a way that's unprintable", but when I colored, I would think, that's not really true, is it? You might believe that the parts that don't show up in print are wasted, but maybe there's something" that seeps through. Perhaps it's lingering sentiment. I believe that's something that's contained in the originals. My colored style has changed from before, too. In the past, I would only color the parts of the original that would show up in print.

Interviewer: Up until the middle of Part 4, you would draw a rectangle with blue pen to trin out the part you didn't want printed, right?

Araki: That's right. But, somewhere along the line, I decided I'd color in the whole thing.

Interviewer: Around the beginning of Part 5, you started drawing everything, backgrounds and all.

Araki: When you color everything in, you get a sense of satisfaction when the drawing is finished.

Interviewer: And I believe your first art exhibition was around that time too, right? You just suddenly had an individual exhibit in Paris (laughs).

Araki: If I wanted to hold it in Japan, I'd have to work things out with my publisher, and it seemed there would be a lot of work, so I thought, I might as well do it overseas, and had it in Paris.

Interviewer: It was an unusual thing at the time, wasn't it? A manga exhibition is rare enough in itself, and this one was even overseas.

Araki: I've always been fond of Paris, but another factor was I knew someone there. I don't think people put much importance on manga art exhibitions at the time. I think both creators and editing departments went in the direction of wanting to become an anime. But, in my case, I knew someone in Paris. Call it fate or whatever, but everything in Paris just naturally came together, and I got to hold an exhibition in an independent art gallery in one of Paris' finest regions. So it's not like I had to push hard to have it in Paris.

Interviewer: And starting with Paris, you've held exhibitions in your hometown of Sendai, and Tokyo, the Italian city of Florence, Osaka, and now in Nagasaki and Kanazawa.

Araki: I'm pleased and honored to have my exhibitions in such storied cities as Nagasaki and Kanazawa. The exhibition halls, Nagasaki Art Museum and Kanazawa 21st Century Art Musuem, are both amazing buildings. I'm grateful and honored to have my art displayed in such buildings. How will JoJo interact with such spaces? I'm very curious to know myself.